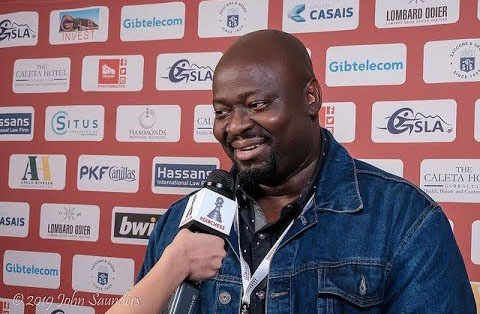 Kolade Onabogun being interviewed by Tania Sachdev after round three.
Photo by John Saunders (Gibchess)

Die-hard chess players have an idea of the elite tournaments around the world, but there are few in which amateur players can brush shoulders with the elite brass. Besides the Olympiad, the Gibraltar Chess Open is one of the tournaments that has received plaudits from top players including Hikaru Nakamura who has won the tournament four times. Players from the Americas, Africa, Asia and the Middle East all trek to the European destination to partake in a special event.

The view of the strait separating Spain from Morocco has a historic importance. The iconic “Rock of Gibraltar” makes quite an impression for visitors and the Barbary macaques (monkeys) are a photo favorite. Also memorable are the interactions and one-in-a-lifetime chances to meet chess role models. Sometimes these players are able to become role models!

Nigeria’s Kolade Onabogun has been on the scene for many years, but his play has tapered off in recent years. Having reached these pages as early as 2002, he is living his dream at the 2019 Gibraltar Festival. In round three found himself on board 17 playing world-class Grandmaster Maxime Vachier-Lagrave. This occurred after the 40-year old Nigerian national defeated GMs Dragnev Valentin and Sipke Ernst to the surprise of everyone including himself. Here is his first win with notes generated by lichess.org.

According to Ajibade Olayemo of African Chess Media, Kolade earned the moniker “Hurricane” after he won the Nigerian Championship despite the five-year layoff. For an amateur player to win two consecutive games against a Grandmaster is rare indeed. Here is how Onubogun described his experience.