At the first Grand Tour event a couple of months ago in Norway there were four decisive games in the first round including a shocking loss of Magnus Carlsen at the hands of Veselin Topalov. The World Champion inexplicably forgot the time control and lost on time in a winning position. In the first round of the Sinquefield Cup, Topalov left no doubt as to who was going for the initiative in this game. Shock waves were created almost immediately in the Sicilian Rossolimo when the Bulgarian threw 7…g5!!? on the board. This caused Carlsen to go into the tank for 20 minutes. This position was not in the databases, but analyses showed that black had enough play for the pawn and so they went. 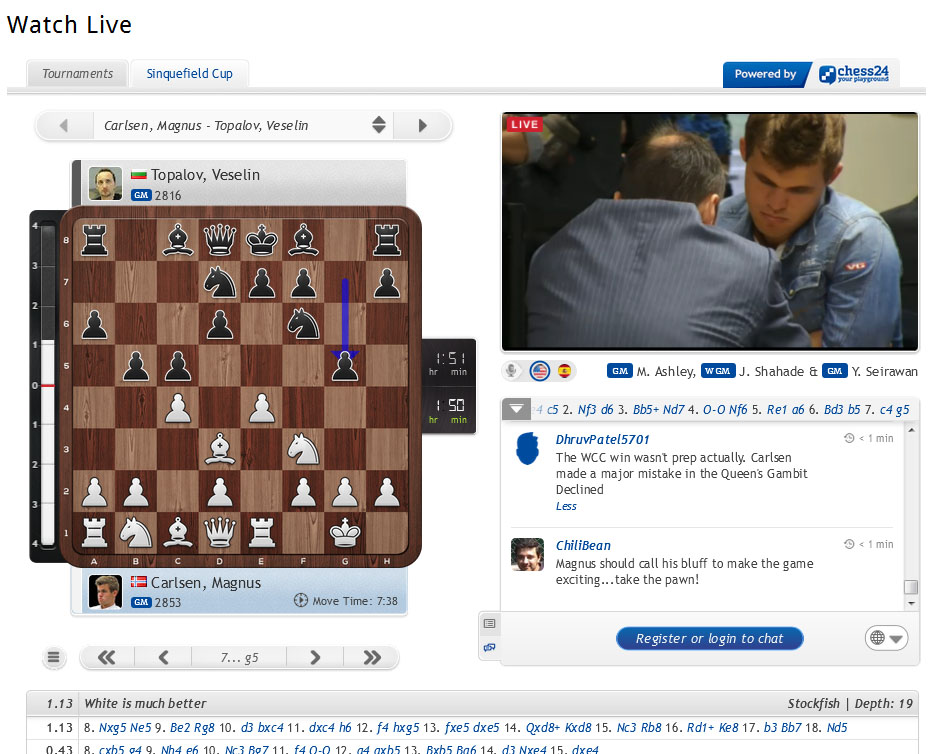 After 8.Nxg5 Ne5 9.Be2 bxc4 10.Na3!? Rg8 11.Nxc4 Nxc4 12.d4 attempting to pry on the center. However, Carlsen did not appear to have enough initiative for the piece after 17.e5? (17.Nxf8! would have forced an imbalanced endgame). All of a sudden black’s pieces were zipping around the board like bullets and white was forced to give up any chances for gaining an attack. Ultimately, some forced exchanged brought Topalov a winning advantage and he deftly snared the point.

Perhaps the best game of the round was featured in Aronian-Caruana. Aronian has hit a rough patch in the past year diving 40 ELO points. However, he appeared to be in good form as he blitzed the first 11 moves to the surprise of the commentators. Everyone assume this “bullet” pace must be brought by intense home-preparation. Indeed it was.

Well… Caruana got tired of being prepped and uncorked 15…g5!!? Another “exotic move”? Commentator Maurice Ashley marveled at the pawn structure of black (see 1:01:15) and Jennifer Shahade quipped that it come from Paul Keres’ books. That was an understatement after looking at the position on the right. Perhaps Hans Kmoch’s “Pawn Power in Chess” would be more appropriate. However, the impressive mass of pawns was an illusion.

Ashley talked about “keeping the tension” and not blinking, but after developing the wall of pawns, Caruana could not resist and played 20…dxe4? releasing the tension and allowing white to seize the initiative. Like a pack of hyenas homing in on a wildebeest, white’s pieces started lurking around the black king for the kill. There were a number of beautiful mating patterns discussed as Aronian calmly donated a rook (or two) for the chance.

The Armenian got a bit sloppy and missed some sure-fire shots to end the suffering. Well… hyenas don’t kill quickly like a lion, so maybe the metaphor was correct. When asked about this Aronian with his Cheshire cat smile said he was taught to take everything because you may not see the mate. Interesting! Being a hyena rather than a lion probably has its upside, but Aronian deserved the point even if he was not precise. There would be no magical result for Caruana.

In Nakamura-Anand, the America was going to see if he could maintain his dominance over the former World Champion. The game was very intense with Nakamura holding a slight edge. It appeared the game was heading for a draw when Anand played 35…f5, a move he considered to be dubious. White was able to win a crucial pawn and surprisingly Anand resigned without playing the ending on further.

The newly-married Anish Giri had an impressive result over the beleaguered Alexander Grischuk when the Russian fell into what has become habitual time pressure. Grischuk spent an inordinate time on 19…Nb6?! giving white a serious initiative after 20.Re3! White sacrificed an exchange to obtain a vice-grip on the position. Then he sacrificed another exchange for good measure for a scintillating attack and after 32.Bxh7+ Kf8 33. Qe2 Rc1 34.Qh5, black’s king was ambushed… this time like a lion.

MVL: "I think this pawn sacrifice is sounder than some of mine in the past!" https://t.co/nRJ5oalem4 #c24live pic.twitter.com/y3nNCUFcIm

Lastly, So-Vachier-Lagrave was an interesting encounter that raised some question about the Filipino’s preparation. In the “confession room” MVL felt confident about a pawn sacrifice. So played a number of befuddling moves and violated principles to maintain consistent with the theme of the round… break old principles of chess. Unlike Topalov’s …g5 and Caruana’s …g5, no one seemed to understand why So moved shuttled his pieces around the board to win a pawn. He ended up feasting himself to death as black’s initiative netted him an exchange and soon a dominating position on the weakened white king. The rooks were poised to barrel into the white kingside like a battering ram.