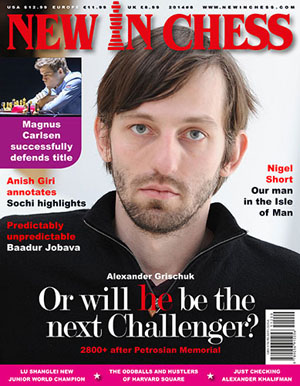 Alexander Grischuk has long been known as a supreme talent and recently breached the 2800 barrier after winning the Tigran Petrosian Memorial. The scruffy-looking and once dread-locked Russian has again been put on the short list of championship contenders.

Polish phenom Jan-Krzysztof Duda brings up such an important point in his “The Next Generation” article. It discusses the wave of Asian talent seen by the domination of China in the World Under-20 event. Of course the writer humbly downplays his own prodigious talent, but of course his observations are spot on. Both Lu Shanglei and Wei Yi took gold and silver respectively and cemented the idea that the Chinese men (with their Olympiad gold medal) has finally become a permanent force. The nation now ranks #2 on the FIDE rating list. Duda annotates a number of interesting games.

Of course one of the main features of the magazine was Carlsen’s victory over Viswanathan Anand. Surprisingly… or maybe not, Carlsen was not on the cover of this issue (Note: Last year he was on 4/8 covers!) Interesting contrast to the match last year, both in the competitiveness of the match and the venue. Very well done by Dirk!

There are a number of other interesting articles including “Where Oddballs, Hustlers and Master Meet,” describing the chess scene at Harvard Square. Indeed. This is a legendary place on which many famous players (and celebrities) have trod. The story of National Master Murray Turnbull is legendary.

According to a profile in Harvard’s Crimnsonian of December 17, 2004, Turnbull, the son of a Harvard professor in applied physics, dropped out of Harvard in 1970 and lived as a homeless person in Berkley, California for a few years.

I met Turnbull and enjoyed a short chat with him back in 2008 while at a conference at Harvard Business School. The photo below is him in the flesh and he recounted to me a similar story of his background…. leaving school, migrating to California and then returning to Harvard Square primarily living on his father’s largess. I didn’t believe he was a master until I looked him up. 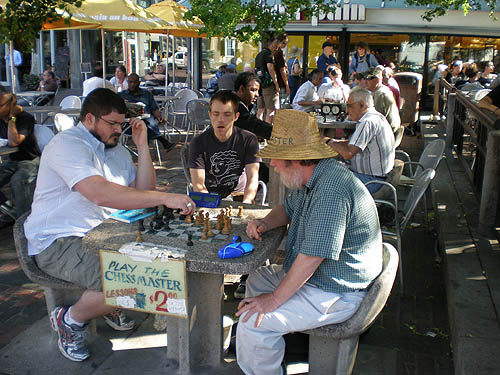 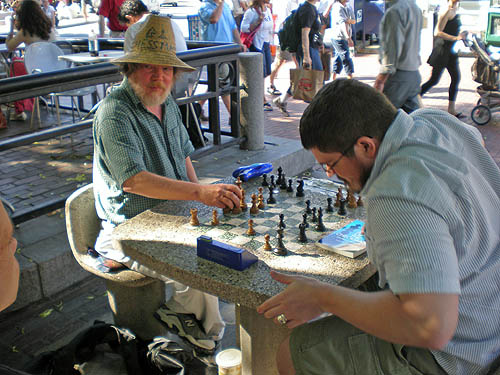 These stories of grungy street chess are always colorful and full of life! Olimpiu Urcan describes a few more of the colorful characters in the square, a “tall, ghostly-looking man with a shaved head,” a know-it-all “1645-rated American-Chinese,” and IM Marc Esserman. Street chess has its own allure and the descriptions of this scene are spot-on, eloquent, yet humorous. A famous chess player once said, “chess is life”. Fischer? Maybe he was right!