It all came down to the final round to decide the winners of the 2014 Digicel National Chess Championships. In the end there were two new champions, National Master (NM) Andrew Mellace and Woman Candidate Master (WCM) Rachel Miller.

Andrew Mellace went into the final round leading by 1 point and needing at least a draw from his game against Shreyas Smith. Following closely was defending champion Candidate Master (CM) Damion Davy on 5.5 points and in a must-win situation vs NM Russel Porter. In the end Davy did win his match but still could not catch Mellace, who turned back Shreyas to finish on 7.5 points.

In 3rd place was NM Daren Wisdom on 6 points who won his last round game against a struggling Miguel Asher. NM Malaku Lorne slipped into fourth on 5 points, with a victory over Women’s International Master (WIM) Deborah Richards-Porter.

The top 5 of the Nationals will represent Jamaica at the Chess Olympiad in Tromsø, Norway but, in 5th – 6th position tied on 4.5 points each was NM Russel Porter and NM Brandon Wilson. The 5th player on the Olympiad Team is as yet undecided.

Rounding off the rest of the table was Deborah Richards-Porter, NM Paul Brooks and Shreyas Smith on 3 points each, while Miguel Asher finished on 2 points. 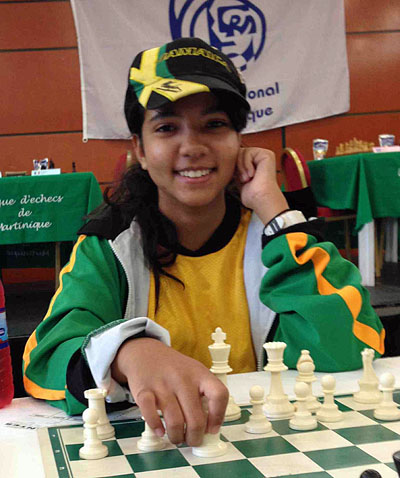 History was created in the Women’s Nationals, as 14 year-old Rachel Miller became the youngest female to win the championships in Jamaica. She finished on 5.5 points, a full point ahead of her nearest rival WCM Melisha Smith. With a win in the last round, Melisha could have finished tied with Rachel but she faltered against WCM Ariel Barrett and finished on 4.5 points.

Third place went to the dethroned champion Annesha Smith on 4 points and 4th and 5th went to Krishna Gray on 3.5 points and Ariel Barrett on 2.5 points, respectively.

Both the Absolute and Female teams will begin training immediately for the 2014 Chess Olympiad.