In yet another attack on subculture of street chess, San Francisco authorities have completely shut down the location on Market Street citing drug dealing and illegal gambling. Three years ago, the group was told to move from the location due to accusations that chess players had been disruptive and occasional fighting had occurred. 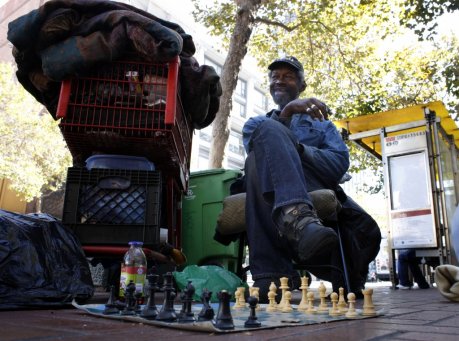 Marvin Boykins smiles as he waits for a game. With all of his worldly possessions in shopping carts, he is one of several homeless who finds chess as a pleasant respite from their daily struggles. Photo by Lacy Atkins.

According to a September 17th story in the SFGate, police confiscated the tables and boards and stated that it had become a “public nuisance”. Business owners in the area have complained about narcotic sales in the area. The players have set up portable boards for the past 30 years and accommodates the elderly, homeless as well as the well-heeled professionals looking for a quick game. “They’re being mean for no reason,” says 42-year old Hector Torres Jr. “To me, it’s a scapegoat,” he offers.

These types of banishments are not uncommon. They have occurred before in San Francisco as well as Chicago which had the famous “Harper Square” case. Street chess is popular in many of the larger cities including Los Angeles, Washington DC, Maryland and even in New Orleans where Jude Acres is a famous fixture. New York’s legendary Washington Square Park is perhaps the most famous locale for street chess.

At press time, The Chess Drum has not gotten any further information on this case. Anyone with any leads, send to webmaster@thechessdrum.net.