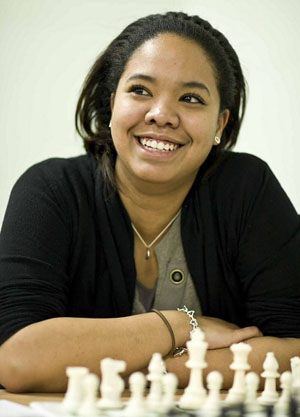 WFM Sabrina Chevannes of Birmingham, England penned an article for ChessBase about her American chess experience. Late last year, Sabrina told me she was coming to the U.S. for a visit. I had been covering her chess activities since she was around 13. Unfortunately, she would be too far away for an overdue face-to-face meeting, but unbeknownst to me she trekked to “Sin City” to check out the North American Open. Of course this is not considered the marquee tournament of the U.S., but it still draws a handful of top players on the American circuit and a few strong internationals.

Newlywed Varuzhan Akobian would be the highest-rated U.S. player at 2698 USCF and Alexander Shabalov at 2600 USCF seems to play in every single major tournament (hence his relatively low rating). Both were overshadowed by Francisco Vallejo-Pons who initially got hundred points added to his FIDE rating when he played in the 2010 World Open.

Chevannes’ article echoed the negative observations made by many European predecessors. Granted, these are complaints even made by U.S. players. The fact that one has to bring their own equipment to tournaments is well-known. It has been written about in many articles by those experiencing tournaments in the U.S. It is a truth that U.S. players have gotten used to, but on occasion we get to experience this amenity.

“All in all, my first impressions of a US tournament wasn’t great as it seemed like a very lazy and unprofessional way of running things, but the prize money was pretty decent for such a short tournament. The fact that it was held in the middle of the Las Vegas strip was a good and bad thing – good for the entertainment, bad for my wallet!”

Everyone chuckles at the thought of an organizer supplying equipment in the U.S. If that should happen, the poor chap would be replacing “missing” clocks every round. Nevertheless, players bring their clocks and have to play the “clock game” every round. I’ve seen top players sitting at an empty board waiting on a clock or set. Seeing playing fumbling with their clocks is common and 2700-rated players are no better at setting clocks than anyone else. In fact they may have less experience! The main complaint in U.S. tournament is one Chevannes also brought out… pairings. She was bemused at the do-it-yourself charts, but they are not really do-it-yourself. Players record the results and the tournament directors get them from one location instead of running around collecting scores. They end up having to do that anyway if someone does not record their scores. However, the practice of setting pairings out only minutes before the game is one that has dogged U.S. tournaments for decades. Her observations followed:

“Some boards were half set up, some boards weren’t even there, people were everywhere, just gathering and having a chat. It seemed that by arranging things in this manner, the organisers didn’t have any control over when the game could start.” This is common because the pairings are sometimes up late and it takes ten minutes for people to get to their boards and set up. Then the dreaded pre-round announcements. Ideally, pairings are put up about 15 minutes before the round. Of course delays are inevitable amidst a host of unforeseen events… perhaps some Vegas-related. She summed up her experience this way:

All in all, my first impressions of a US tournament wasn’t great as it seemed like a very lazy and unprofessional way of running things, but the prize money was pretty decent for such a short tournament. The fact that it was held in the middle of the Las Vegas strip was a good and bad thing – good for the entertainment, bad for my wallet!

Alas… we’ve heard this before. I hope you enjoyed yourself Sabrina! 🙂