RZA of the famed rap group “Wu Tang Clan” released a video challenge to Jay-Z to lock horns on the chess board. Both are releasing music applications and this challenge looks like an ambitious attempt at cross-branding. It may be a boon to both product releases. 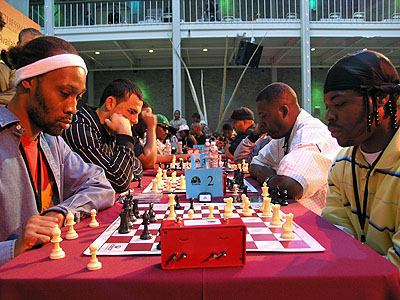 RZA (left) playing Monk at the King’s Invitation back in 2007.
Photo by Daaim Shabazz.

“RZA’s World” is an application that gives users access to exclusive content of his “Bobby Digital” soundtrack. Jay-Z is behind the “Decoded” for iPad/iPhone/iPod which allows access to his own musical content. In the video, RZA gave respect to Jay-Z as a trailblazer and issued the challenge to play on his new app.

RZA made mentioned a “million dollar purse” for the match, but there was no mention of whether Jay-Z would accept the challenge. RZA won the King’s Invitational hosted by the Hip-Hop Chess Federation.

Article at hiphopdx.com on RZA’s World