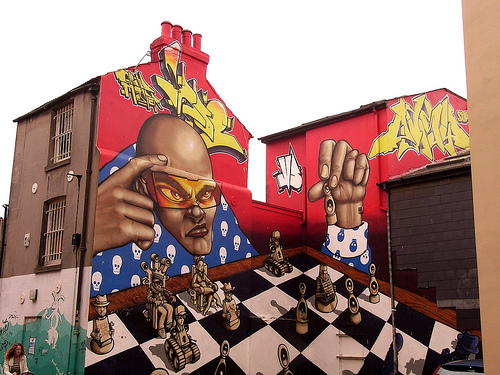 August 16th 2010, San Jose, CA: The Hip-Hop Chess Federation (HHCF) announced via Twitter that it is hosting a graffiti art contest. HHCF founder Adisa Banjoko stated “We love graffiti art and we support all the men and women who put their souls on the wall for the world to see. We believe that graffiti art is the visual language of the streets and we support its elevation and preservation. Hip-Hop artists from Eric B & Rakim, Fat Joe, Pharcyde, Dilated Peoples and tons of others participate in or support graff. People used to say it wasn’t even art. Today graffiti is used by global clothing, food, technology and entertainment brands across the planet. Its impact cannot be ignored.This contest is an attempt to help young artists showcase their skills and help them share it with the world.”

That said, the Hip-Hop Chess Federation is proud to announce the 1st HHCF Graff Contest. To participate do the following:

THE WINNER OF THE 1st HHCF GRAFF CONTEST WILL WIN: An official HHCF chess board autographed by platinum rappers RZA and GZA from the Wu-Tang Clan, Rakaa from Dilated Peoples and chess legend Josh Waitzkin. THE WINNER WILL BE ANNOUNCED SEPT. 30th 2010!!! Be sure to follow us at www.twitter.com/hiphopchess to be part of the discussion.

ABOUT HHCF: The Hip-Hop Chess Federation is the worlds first organization to fuse music, chess and martial arts to promote unity, strategy and non-violence. They host celebrity chess tournaments, Brazilian Jiu Jitsu showcases host panels where chess masters rappers and fighters can talk to kids about life strategies. They also host events to encourage mind and body balance in youth and teens around the world. HHCF also works to stop bullying in schools, resolve gang conflicts and promote peace on the streets.