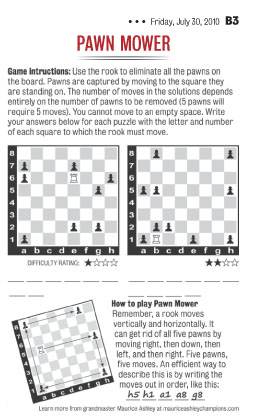 Grandmaster Maurice Ashley is known for many things in chess, but he continues to add on superlatives in his 30-year career. Lately he has used his patent of “pawn mower” a concept derived from an exercise he featured in his CD “Maurice Ashley Teaches Chess.” This concept has now made a debut in the Richmond Times on the puzzle page along with the crossword and sudoki teasers.

The 1995 CD had a number of useful learning guides and perhaps pawn mower is one of the most entertaining since it may remind one of a video game. Remember Pac-Mac rage of the 1980s? While Pac-Mac’s vertical and horizontal dance would be tame by today’s gaming standards, pawn mower is a chess variant that challenges the players to capture all the pawns with a rook on a continuous path. The exercise is fun and also test visualization since you must plot the course of the rook before moving. Ashley told The Chess Drum that the puzzle debuted in the Richmond Times on July 23rd. Perhaps the concept can receive syndication in newspapers around the country.