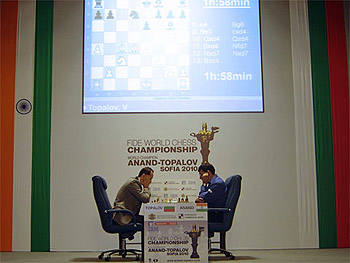 Topalov and Anand square in a pivotal 5th game.
Photo by ChessBase.

Game #5 was a key affair for Challenger Veselin Topalov. Many pundits were wondering how he would react to the severe thrashing he took in the previous game. Would he come out with guns blazing trying to get the point back? Would he try for an incremental improvement on Game #3? Would he change course and play 1.e4? All good questions.

It turns out that Topalov repeated Game #3 but it would be Viswanathan Anand who tried to improve his play. In a psychological battle, Anand played the Slav, but his team may have feared that Team Topalov would find an improvement. Thus, Anand played 15…h5 instead of 15…h6 to prevent 16. Ke2 Bd6 17. h5 Bh7 18. a5 as in the previous game. This was probably too passive for Anand’s liking so he choose a more active route.

Around this point of the game, the Bulgarian organizers experienced a snafu when the lights in the military club went out for 15 minutes. Both players continued to study the position until the arbiters approached the stage. This was an embarassing situation for the organizers who were already under heavy criticism for how they handled Anand’s delay to Sofia due to the Icelandic volcano. A letter of apology was released. ‘Powergate’ was a new term given to the match.
The power outage lasted 15 minutes. Photo by ChessBase.

At this point, Topalov realized that he could not trade pawns after 41.Rc5 Nf5 so he went for the repetition. This time it was Anand who initiated the offer after being ignored by Topalov. The arbiter then stepped in to offer the draw and it was promptly accepted. A very awkward state of affairs. (See Game #5)

Posted in World Championships | No Comments