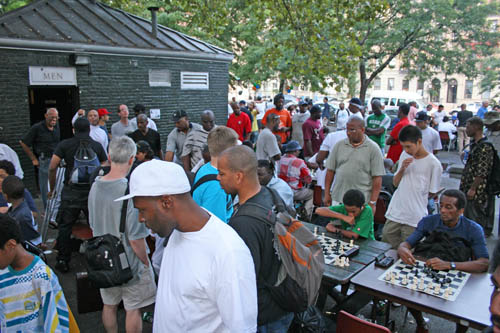 Harlem, a place of historic prominence in the arts, continues to add to its resume with the 2nd Annual Blitz Championship. The city was host to the historic Wilbert Paige Memorial in 2001 and was immortalized when Maurice Ashley coached Harlem teams to prominence. Adia Onyango sent a report of the event which includes mention of her 1st place win. Onyango is also a New York state delegate for Barack Obama and is displaying her loyalty in the picture below.

Derrick Bryant, referred to by some as New York Cities Don King of Chess promotions has once again delivered to the Harlem community and beyond a sensational chess extravaganza. On Saturday, August 23 the 2nd Annual Harlem Chess Tournament was held in the famous Saint Nicholas chess park, located at 141st Street and Saint Nicholas Avenue. This was an 11-round Swiss System Blitz tournament. Players from Harlem, Brooklyn, Queens, Bronx, Long Island, and as far out as Philadelphia and New Jersey, all converged on the park to determine who would be crowned the Harlem Blitz Champion of 2008. There was a plethora of fun, food, and excitement for all who attended. 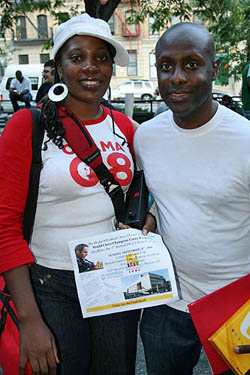 In addition to being well attended by various National, International, and FIDE Masters, the tournament was also well attended by chess leagues, club members, and players from chess parks across NYC. Roberto Sabio, owner of the Oxford Gambit Chess club in Brooklyn N.Y. was in attendance along with Robert Earl Ali, Secretary of the Kingsmen Chess Club, and members of various clubs such as, the Queens Chess Club and the Marshall Chess Club.

When asked whether tournament director and event promoter Derrick Bryant was pleased with the turnout he replied, “This has been the strongest chess tournament in Harlem in years.” Other attendees were equally as excited about the event, stating that it was a chess player’s paradise. From day break to night fall chess pieces were being pushed across the board with a positive logo of “Push Pawns Not Drugs” posted in the backdrop on the bathroom door and young children playing in the background. 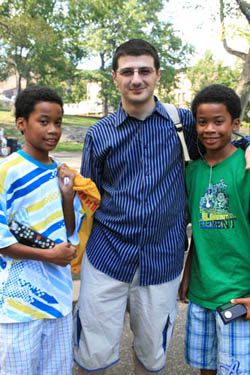 After a grueling 11 rounds and a blitz tie breaker play-off between GM Zviad Izoria (pictured right) and Jairo W. Moreira, Izoria clinched the 1st place cash prize and humungous trophy, finishing with 9 points and being crowned the 2008 Harlem Blitz Champion. IM Alex Lenderman finished in 3rd place with 8.5 points, and Raul Marquez finished in 4th place with 7.5 points. However, the biggest upset in the Open section was Harlem’s own uprising star Rafael Calderon (1933), who finished 5th drawing a game with GM Izoria and winning against a few masters.

In the A section, Ian Wiggins, A.K.A. “Boko” from Harlem finished first with 9 points leaving 2nd and 3rd to the Ryba brothers from the Queens Chess Club, Nicholas and Andrew. In the B section, David Pointer and Lorenzo Wright tied for first, with David from Philadelphia clenching the prize in a blitz play-off, and “Cee” from Brooklyn finishing 3rd. In the C section Adia Onyango, the only female to place in the top three, finished first with 9 points. Second place was taken by Rudy Zaiter after a blitz tie breaker with Jose Pinto.

This tournament was rich with excitement because it contained both players who have already defined themselves as stars on the chess scene as well as rising stars. Some young rising stars to keep your eyes on over the next few years are 9 year old Joshua Colas and 12-year old twins Nigel and Jehron Bryant (pictured above with Izoria) all of whom tied for sixth in the A section. Will any of these young rising stars follow the drum beat of Kassa Korley? Only time will tell.

Last month, at the age of 15 Kassa Korley of NYC achieved the title of youngest National Master of African descent beating out the legendary Howard Daniels by just a few months. Who will be the next rising star from NYC and will the rigorous Harlem tournaments, NYC chess parks, and chess clubs be a part of this story?