FM Jorge Oquendo came into the 2018 Florida State Championship as the defending champion. The Cuban national lives in the Jacksonville and enjoyed “home-court advantage.” It would come into play in a field headed by GM Benjamin Finegold who drive in from Atlanta, Georgia. There were 131 players who trekked to North Florida for the tournament and the Marriott was the venue for the second year in a row.

Oquendo won his first two games against Experts Alex Sinnott and Ravindra Wijesundera before facing Arslan Otchiyev, who traveled all the way from West Haven, Connecticut. In fact Otchiyev is a professional mixed martial arts fighter from Turkmenistan. Here he is in action.

Otchiyev would win that fight but lost his battle with Oquendo in the third round. It would be his only loss, but he could not rebound fast enough to catch Oquendo. In the 4th round, Finegold and Oquendo drew quickly to leave the Cuban in the lead going into the last day. Meanwhile, Finegold was held by Tampa native FM Corey Acor and couldn’t seem to gain momentum. He ended with four consecutive draws.

Perhaps a great story brewing was the performance of 14-year-old Benjamin Chen who was undefeated after four rounds. After drawing with Bryan Tillis, he scored wins over Daaim Shabazz and Timur Annayev. He then drew with Troy Daly to sit 1/2-point behind the leader. His pending match with Oquendo would be a big challenge. 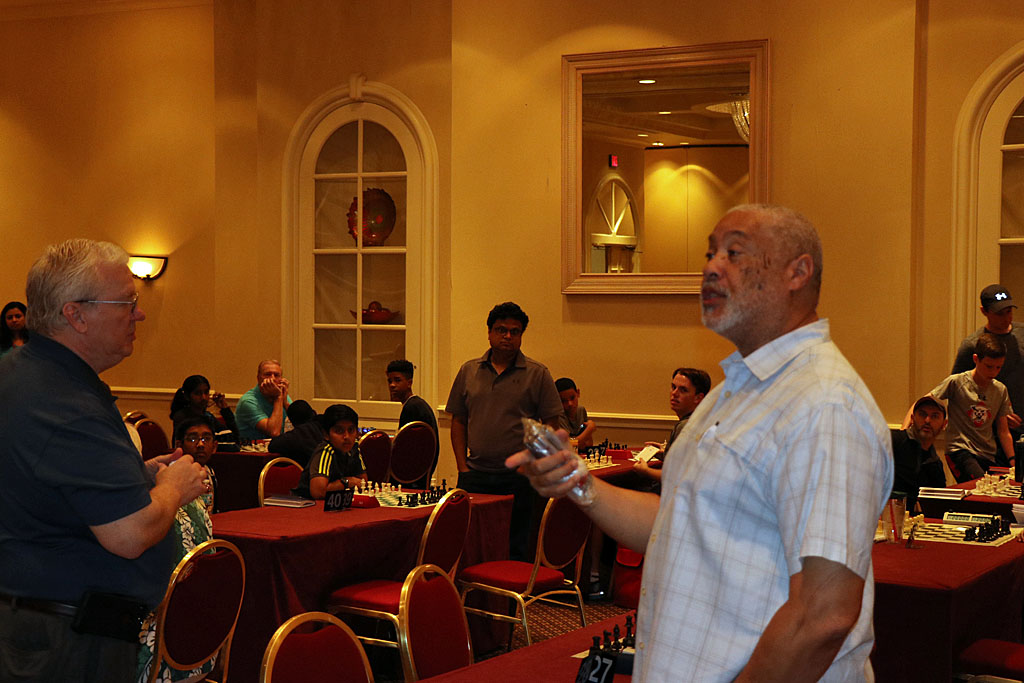 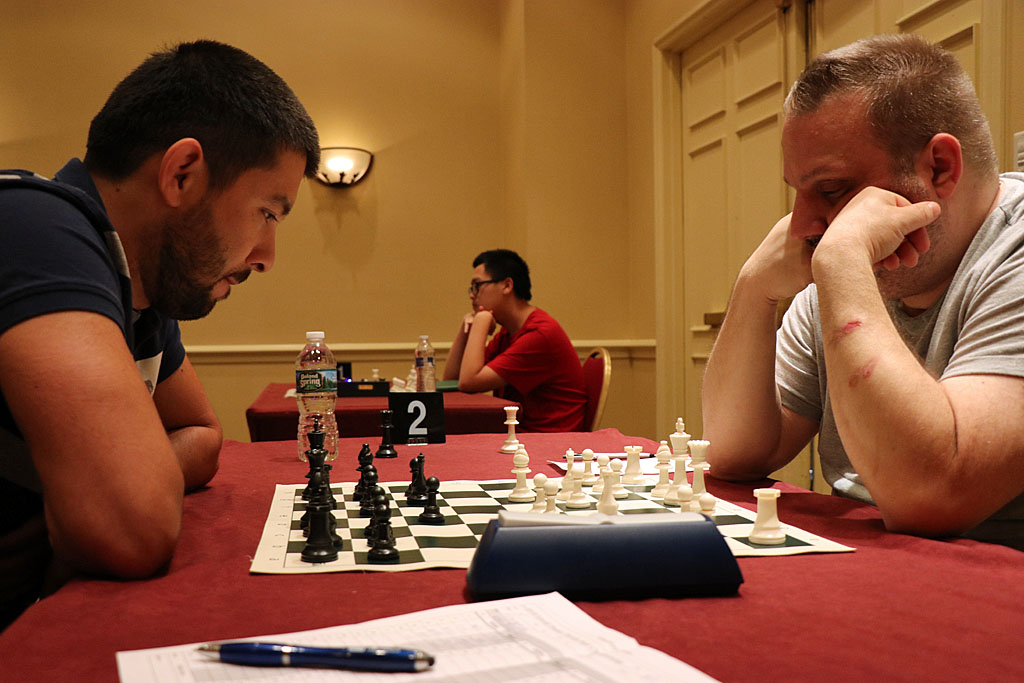 There was some tension in the air as Jorge Oquendo was not at his board at the start of the 5th round. Ben Chen waited patiently while Ben Finegold faced MMA fighter Arslan Otchiyev. 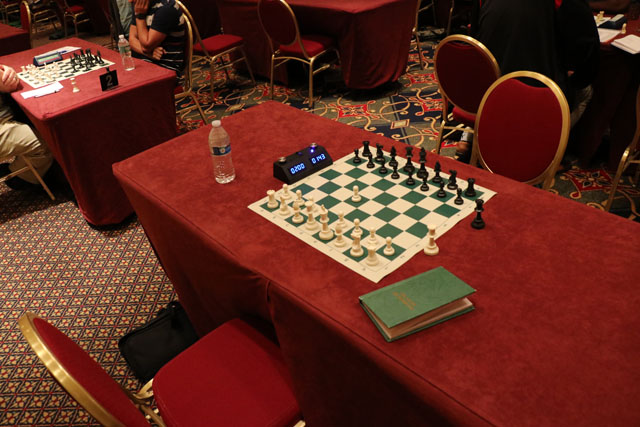 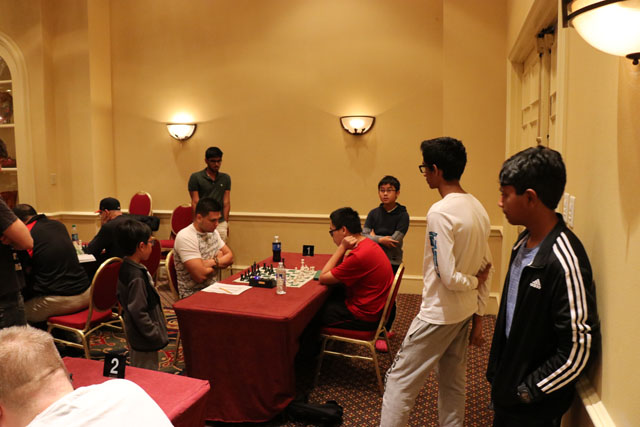 The game is on! A crowd gathers around the top board.

Oquendo finally showed up, and the game quickly drew a crowd. Ben, who is in the top 100 in his age category, fought valiantly but lost a long struggle in a rook ending. The Finegold-Otchiyev battle was drawn while Acor beat 10-year old Bach Ngo (2012). Acor would get a shot at Oquendo to earn a share of 1st place. 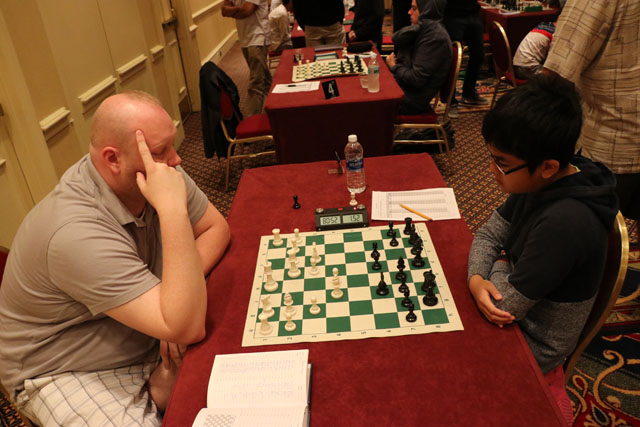 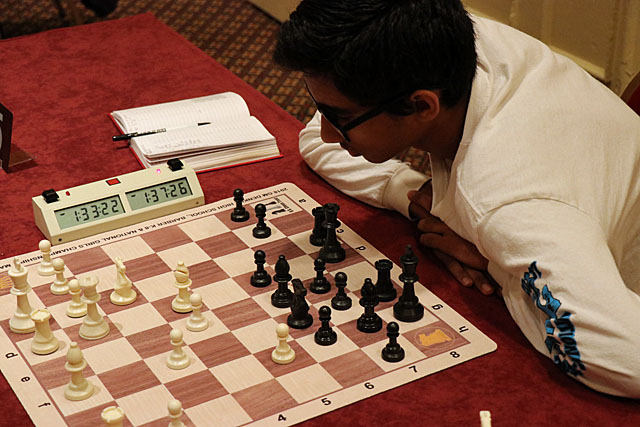 In the final round it would be Oquendo (4.5) to face Acor (3.5) with Otchiyev (3.5) being paired with Kai Tabor (3.0). In fact, there were several players sitting on three points. Pre-tournament favorite Finegold (3.0) was in an improbable position of not competing for a tournament win and was paired with upstart Bach Ngo (3.0).

Ngo, a promising scholastic player, was having a good tournament despite losing the previous round to Acor. Bryan Tillis had already ended on 4.5/6 with byes in the last two rounds. However, he could theoretically tie for 1st if Acor toppled the defending champion.

In the end it was Oquendo ending with 5.5 points with a win over Acor and Oticheya winning against Tabor. Ngo ended a strong tournament by drawing Finegold and ending on +1 score and earning 63 rating points. Oquendo successfully defends his title, but will have his hands full in a much stronger field when the tournament moves to south Florida. 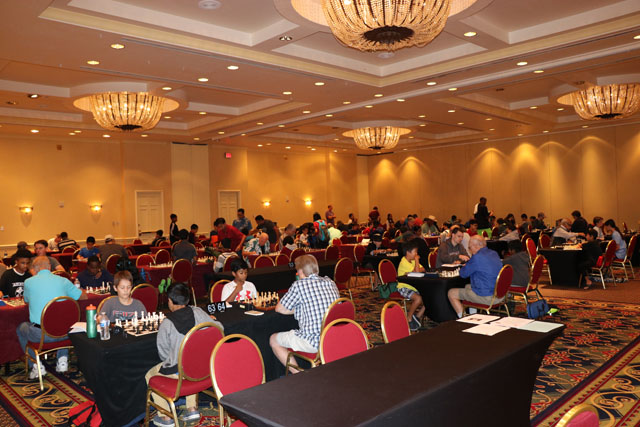 There were many interesting “faces in the crowd” at the state championship. Florida has made progress in producing a number of talented scholastic players. Several played in the Open section while others performed well in other sections. 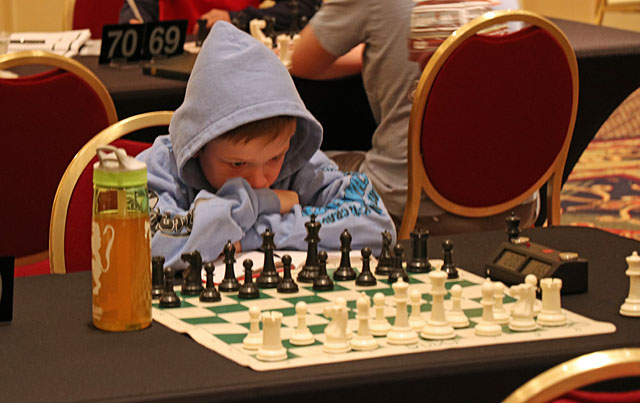 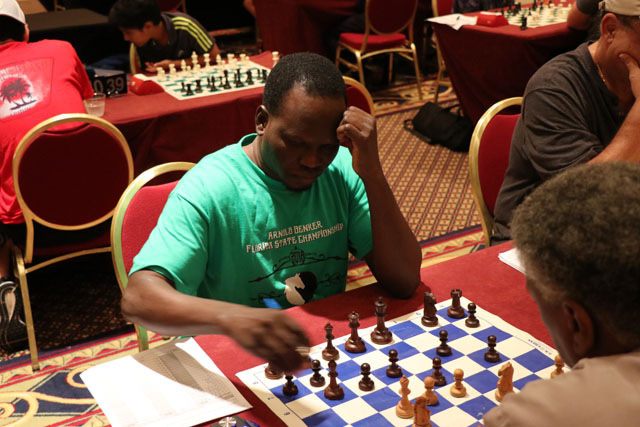 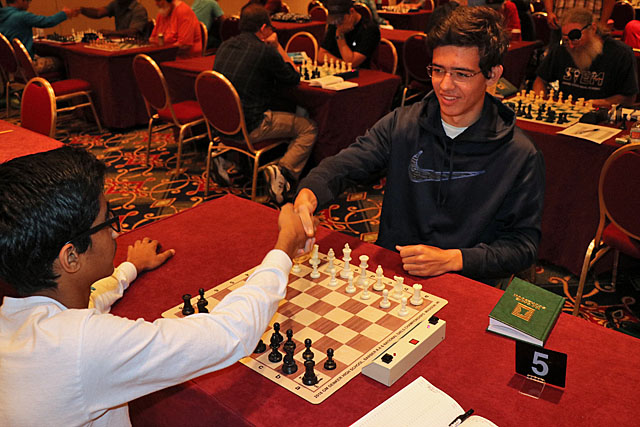 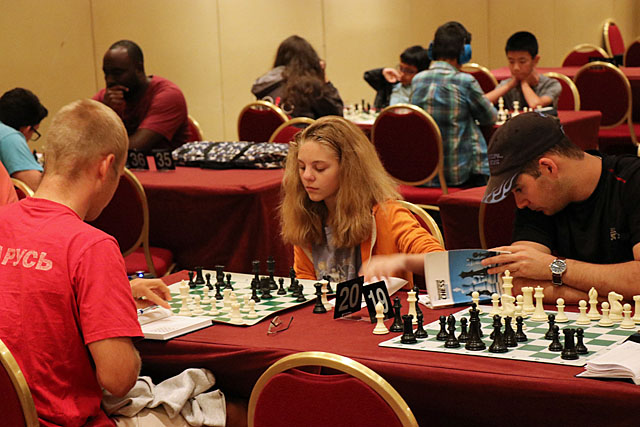 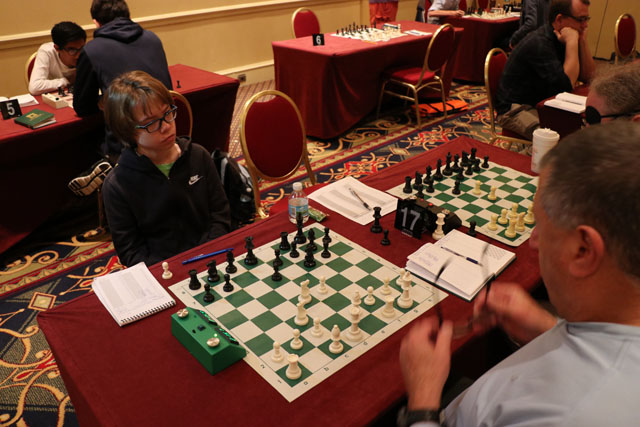 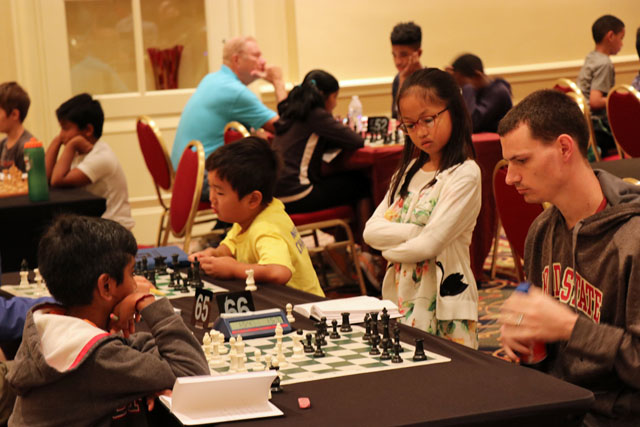 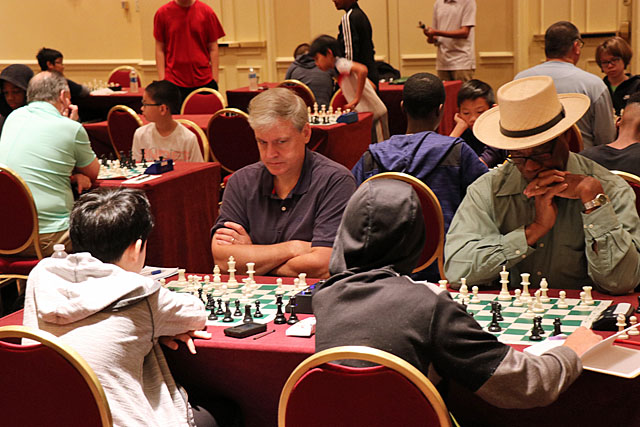 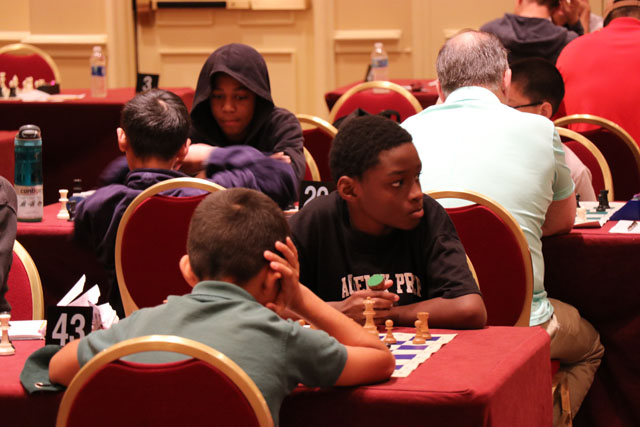 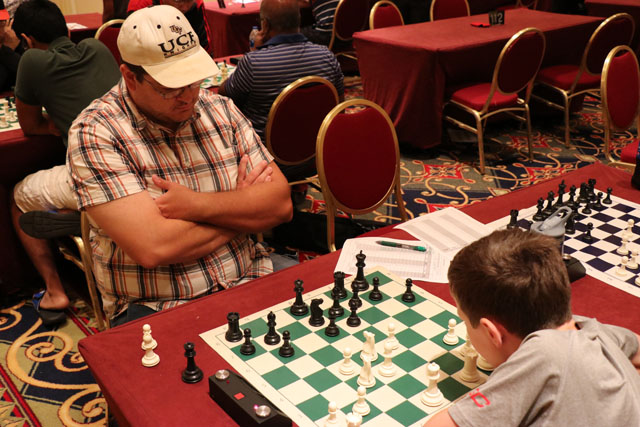 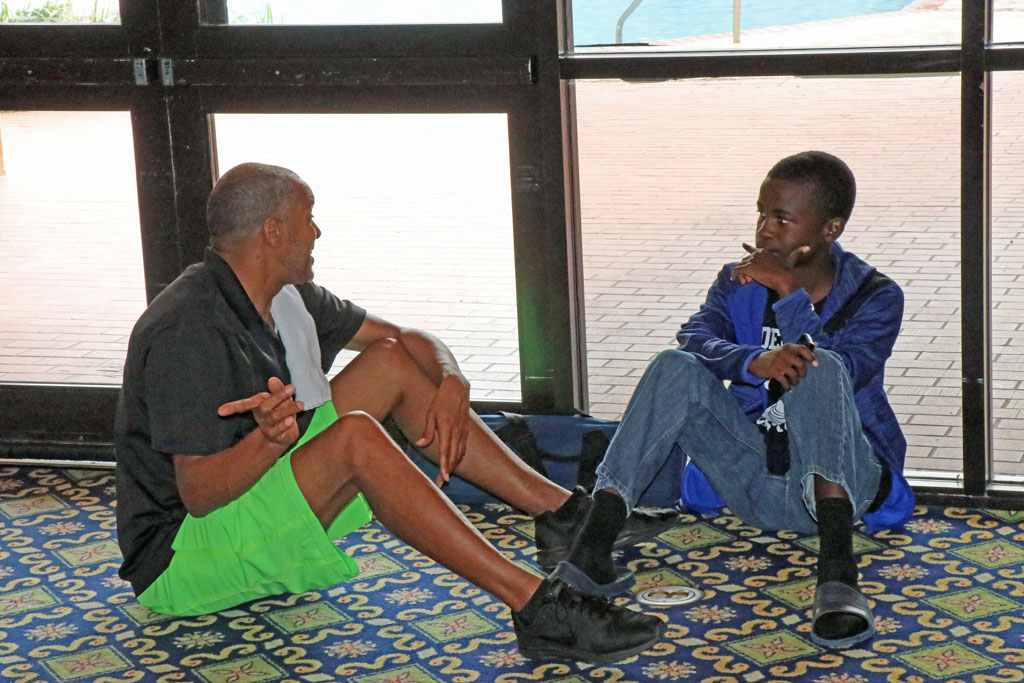 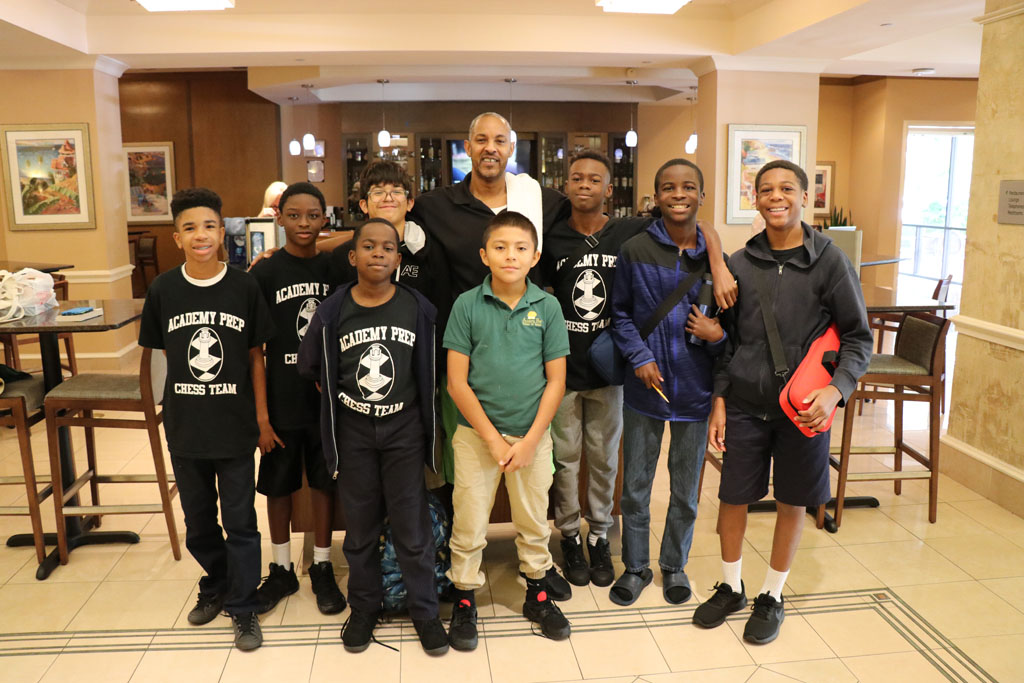 On Sunday morning, the Florida Chess Association Board of Directors met and handled the chess business of state. The new membership management system called WildApricot has been adopted to make the process of Florida players interacting with the FCA more efficient. The implementation of the system has helped produce an increase in membership and a more accurate reporting mechanism. The FCA is in a very stable financial state.

The Board has vowed to support scholastic and collegiate chess in Florida and also continue to lend sponsorship to the Pro Chess League Florida team. There was one bid for the 2019 Florida State Championship submitted by Bryan Tillis representing Palm Beach Chess and Boca Chess. The venue will be for the Palm Beach Gardens. The election certified the new Board of Directors for 2018-2019.