Game 5: Another draw, but momentum to Karjakin! 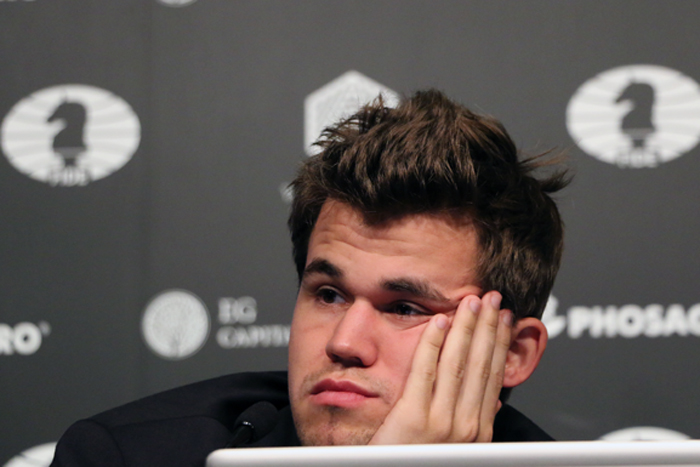 Magnus Carlsen started a social media trend #Trumpowsky with his first round 1.d4 Bg5 2.Bg5. When asked if the opening had to do with the election victory of Donald Trump, he said, “A little bit.” Well… the next day was “National Pizza Day,” but the Ruy Lopez appeared on the board. Sergey Karjakin could’ve played the Italian Game to keep with the theme, but of course the joke had already been taken too far. Today Carlsen played the Italian Game, or “Giuoco Piano” as a way to avoid the Berlin Defense. This has been a recent approach at the top level to venture into positions similar to a classical Ruy Lopez without having to face the stout Berlin. This game had its moments and there was some levity about the romantic opening.

21st century homo chessicus has concluded that white should put his bishop on c4, attacking f7 – as they already understood 500 years ago.

Almost on cue, Carlsen uncorked the bughouse-like 14.Bxf7+ to avoid 14.Nxe4 d5 which equalizes immediately. However, after 14…Rxf7 15.Nxe4 d5 white’s position looked a bit artificial, but on 16.Nc5 h6 Carlsen played 17.Ra3! A nice ROVER maneuver that got the approval of GM Samuel Shankland. The idea is fairly obvious… swing the rook over and exert pressure on the e-file. That’s not what happened. It appears that Carlsen went awry after 17…Bf5 18.Ne5 Nxe5 19.dxe5 Qh4! Black’s pawn structure stood solid while white’s pawns were a hot mess. In fact, Karjakin was playing for the initiative.

If we are saying that Carlsen has outplayed Karjakin, yet is disappointed, it may wear on him more than Karjakin having to defend bad positions and holding. The Russians seems to be upbeat at the press conference while Carlsen sulks. Today it was the possibility of losing. “I was lucky not lose,” he stated. The key point came when Karjakin marched his king to the safety of the closed queenside and then banged out 42…d4 to open a crucial diagonal after 43.Qxd4 Bd5. GM Robert Hess suggested

“43…Rh8 needs to be examined at length. White’s queen was drawn off the second rank, which means he’s unable completely unable to get his rook to h2 once the major pieces form a battery. Reading engine evaluations often are misleading in such positions. While there is no question that Karjakin is the only one with winning chances and an edge for him comes as no surprise, even a reasonably high evaluation can fail to take the prospects of an opposite-colored bishop endgame into account. Even two pawns down, many such endgames are drawn, so there must always be context given to a number.”

Carlsen immediately counter-sacrificed a pawn to untangle his pieces and gained enough play to neutralize the position. At the press conference, Karjakin was in an upbeat mood in contrast to an agitated Carlsen who did not play his best chess today. The effect of this is a subject of discussion. After bungling two superior positions, Carlsen came close to losing today and seems to be losing his composure. With two whites in a row, Karjakin can really apply pressure with a win before the rest day. If Karjakin wins, it will be interesting to see how Carlsen responds.