At the 42nd Olympiad last month 1,583 players from around the world assembled in Baku, Azerbaijan to compete in the marquee tournament of they year. Players donned their colors and beautiful cultural garments bringing with them the history and pride of their chess communities. At the Olympiad there are so many stories that we never hear. Each federation has a player who can tell a very interesting life story of how they found their way to national repute as an Olympian. Phiona Mutesi is one such player with such a story.

On September 30th, “Queen of Katwe” opened in theaters across the U.S. after a week of pre-screenings. The movie was highly-anticipated and adaptation from the book whose full title was The Queen of Katwe: A Story of Life, Chess and One Extraordinary Girl’s Dream of Becoming a Grandmaster. The book was written by Tim Crothers who took interest in the story after tip about a girl from Uganda who won a chess tournament in the Sudan. The clipping was from a missionary newsletter called Sports Outreach Institute. Crothers went to Uganda to get the scoop for an ESPN article.

After arriving in Katwe, Crothers was overwhelmed by the abject poverty and knew this story had to be told. No… it was not a story from a chess enthusiast, website or organization, but from a sports writer who entered a world he had not known before. It was another one of the common narratives of an individual overcoming insurmountable odds. The article titled, “Game of her Life” won high acclaim and turned into a book deal. Queen of Katwe was born.

When the book was released in 2012, it got little traction in the chess community. The Chess Drum featured about a dozen articles on the story, but the chess community viewed the story with a bit of detachment. The problem with chess is that the community is enamored with top players and are purists in every sense of the word. They will often overlook the lessons in stories such as Phiona’s and focus only on whether she has a high rating or a title.

Chess game is elitist and populist at the same time, so this story represented a dualism. These are the type of stories that attract media attention, but draw ire from those that feel that it is “slum shaming.” However, this is more than a random story about a girl coming out of the slum and excelling at chess. It is a girl’s story of survival with chess being a vehicle.

As word got around that Disney would be producing an adaptation of the book, many wondered what would be the angle. Media’s handling of chess has always been a bit clumsy… overstating the intelligence needed to play and reinforcing the stigmatized “geek” narrative. In the early days of the film reviews were glowing, but obviously written by those who did not understand the peculiar world that chess is.

There were of course the detractors who whined that Phiona was getting too much attention when her skill level doesn’t warrant such praise. There was even a piece on the racist, White-supremacist website, American Renaissance attempting to discredit her 1600 rating, Olympiad performances and even used Judit Polgar as a comparison! It is doubtful that any of these detractors even knew how to play. Many players in the U.S. have tremendous resources, access to chess literature, access to coaches/trainers and cannot make 1600 (1700 USCF). If people cannot understand that the movie is less about chess than a fight for survival, then there is no hope for such dark souls.

Directed by Mira Nair, a highly-acclaimed, Indian-born director. Known already for her amazing movies such as “Monsoon Wedding,” “Mississippi Masala,” “Salaam Bombay,” she decided on the idea of turning the Phiona’s story and casting her former film production intern, Lupita Nyong’o. The Kenyan actress first met Nair after her father (Peter Anyang’ Nyong’o) mentioned that he had a friend (Mahmood Mamdani) whose wife (Mira) was a film director. Lupita became Mira’s understudy and years later after her 12 Years a Slave fame, got an e-mail in 2014 about the Queen of Katwe script. According to her recent Vogue interview, “Five pages in I wrote my manager and agent with the words, ‘I must do this film.'” said Lupita.

Robert Katende breaking a coconut in celebration of the start of filming. Director Mira Nair (center) and Lupita Nyong’o (right) look on. Photo courtesy of https://www.facebook.com/maishafilmlab

The movie opens with a poignant scene with Phiona (Madina Nalwanga) asking Robert Katende (David Oyowelo), “Am I ready?” Nair filmed countless touching scenes throughout the movie and the vibrant colors gave life to an otherwise depressing setting. Katwe is a cesspool of despair, yet the people are moving about with purpose. They still greet each other conveying a sense of humanism in a place where they have been forgotten.

Phiona left school at age six to help her mother Harriet Mutesi (Lupita Nyong’o) sell maize and other vegetables in the market. She lugged “jerry cans” in what would be a daily five-kilometer trek (three miles) for clean water. “Phiona! How’s your life?” a neighbor joyously called out. Despite her bright smile and cheerful response, life was certainly not a crystal stair for young Phiona and the family often went hungry. However, her hunger turned out to be a blessing in that it was transferred to a hunger for a better condition. 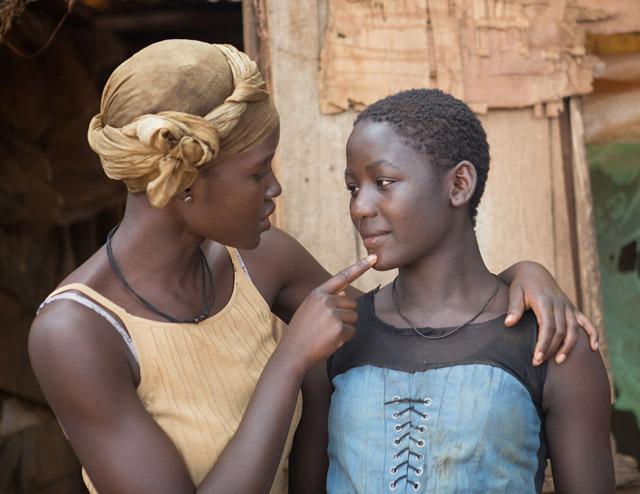 After following her brother to a strange, tin-roofed building, Phiona peered inside to see children playing a strange game. Katenda, seeing the 9-year old girl, beckoned her to join the club. She then learned the moves from Gloria (Nikita Waligwa), a younger club member. When the girl described pawn promotion to the eighth rank, she said, “The small one can become the big one.” You could see the light emanate from Phiona’s smile. 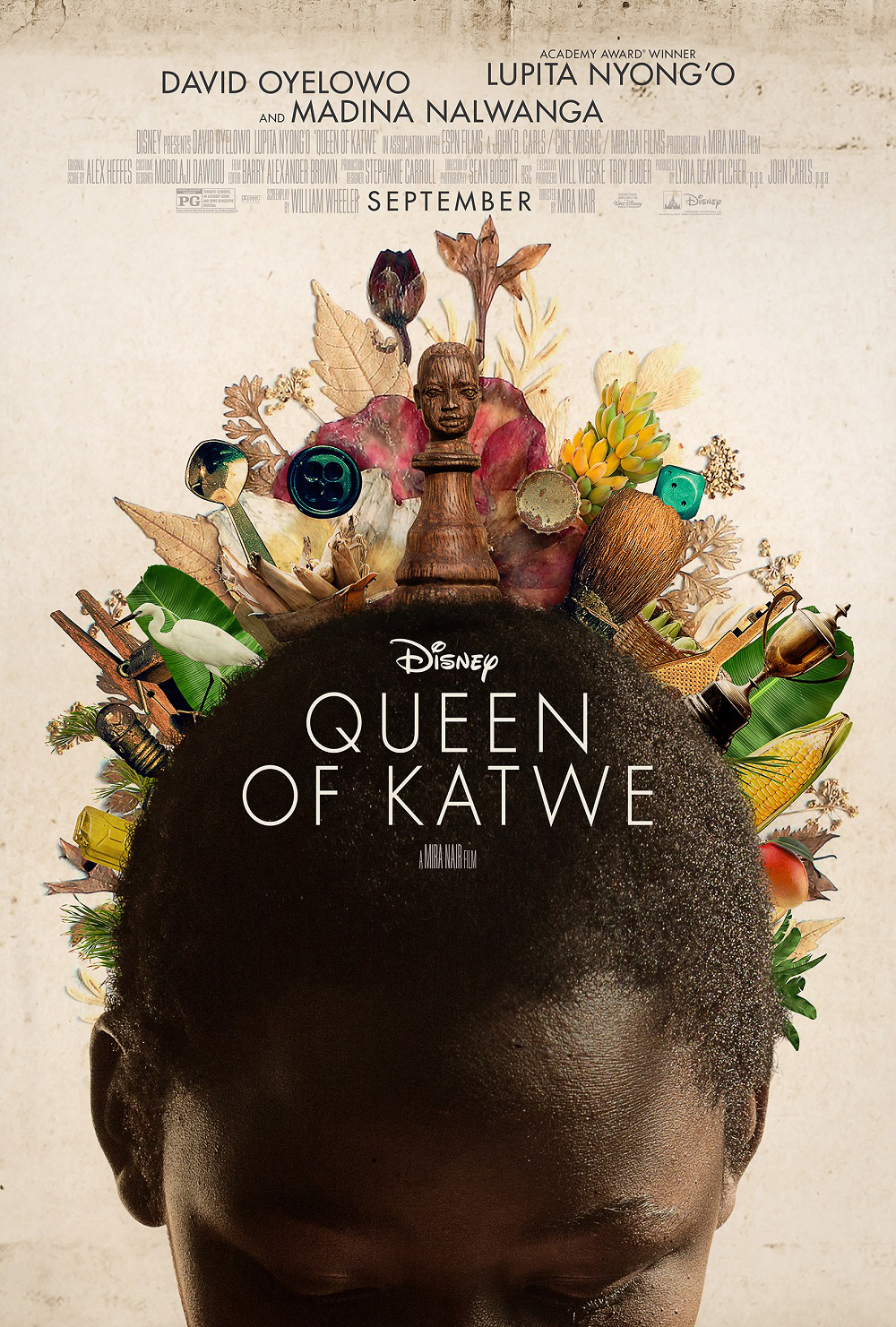 The book had much more detail, but the movie provides enough subplots to show how desperate the situation was. Harriet’s husband died of HIV/AIDS and she was left to take care of four children, including a toddler. Phiona’s older sister Night was being courted by an older Katwean on a motorcycle whom Harriet berated by calling him a “hyena.”

Fearing she was losing her entire family after losing a husband and a daughter already, Harriet desperately clung to Phiona. After following her one afternoon, she discovered that her daughter was playing chess at a club. She confronted Robert who later convinced her that chess was a “game of kings and queens.” Still skeptical, but open-minded, Harriet saw the light shining in Phiona and ultimately allowed her to stay with the coach.

“Focus on what you have!”
~Robert Katende

One of the most interesting scenes occurred with the “Katwe Kool Kats” traveled to Kings College Budo, a British-style colonial school where the boys wore smart uniforms and had an unshakable air of confidence. Many of us who have competed in junior chess have seen this. The team from Katwe strolled in awe of the well-kept grounds of the private school with their rather unpolished, but noble bearing.

On the first night, the team members from Katwe slept on the floor since no one had ever slept in a bed before. Katende had become a father figure, reassured them and allowed the team to grow. “Focus on what you have!” he would tell them. This metaphor is true in chess as it is in life. Needless to say everyone learned a valuable lesson… including the humbled boys at King’s College.

Phiona won the qualifying tournament for the Ugandan Olympiad team and at 14, she would take her story to Khanty-Mansiysk, Siberia, Russia. Siberia is a 32-hour drive from Moscow and certainly the climate was not hospitable. It was on this trip that Phiona had seen snow for the first time, but the joy would be short-lived. The bitter losses that followed were harsh, but after the wounds healed, she developed growing confidence, not only in her chess play, but in her ability to find a better lot in life. 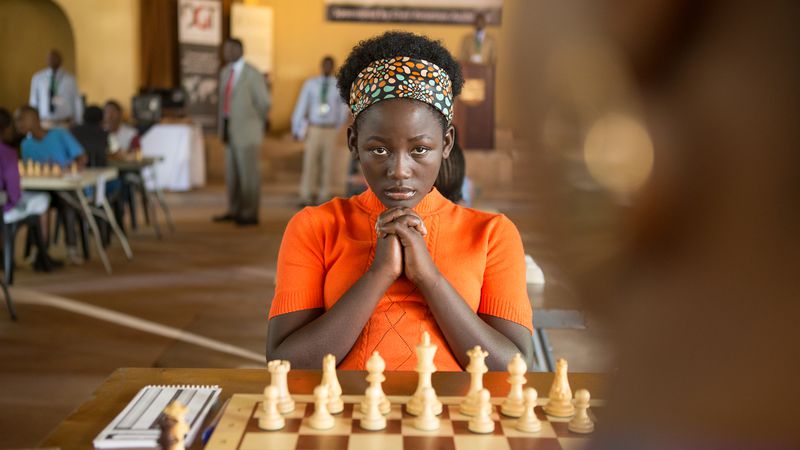 Madina Nalwanga getting set for battle.
Image from Walt Disney.

The acting was superb and Nalwanga was excellent in her debut film. Of course Nyong’o and Oyowelo put in sterling performances along with the rest of the supporting cast. What was most striking was the cinematography and array of bright African garments and bold expressions. The massive sea of destitution stood no chance against the African spirit of “hakuna matata.” Africans are generally happy and optimistic about the future and this certainly a movie that conveys a sense of hope.

For the most part, the movie got the chess dynamics right. The boards were set up correctly so there were no weird game scenarios. There was even a nice sequence where Phiona demonstrated the well-known Philidor’s smother mate. The other common scenes had Phiona triumphantly winning against favorites sometimes reducing them to tears. We wanted her to win… we wanted to see that beaming smile… we wanted Phiona to live life abundantly.

Phiona has been traveling the world telling her story. Few will ask her about the Sicilian Najdorf perhaps realizing that chess is only the undercurrent of her life. Perhaps some will ask her to play a game out of curiosity, but to be able to play a game with someone who has overcome such odds is something that should inspire us all. So many chess players at a given Olympiad can tell a similar story, but there can only be one Queen of Katwe.