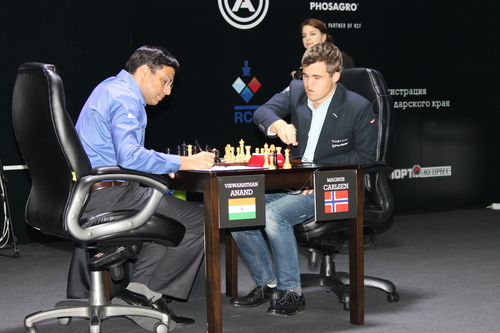 A lot has been made of Magnus Carlsen’s youth in this match against the middle-aged Viswanathan Anand. Perhaps too much is being made of this, but today’s game would put these theories to the test. Unlike game two’s flirtation with the Berlin, the game entered a topical variation and both were ready for a theoretical fight. The game followed a line played in several GM-level games including Giri-Radjabov (1/2, 52). However, Anand was the first to deviate with 25…Nf7 instead of 25…f5.

Apparently Anand’s subsequent knight maneuver was dubious as it led to him have to sacrifice a piece and hold a difficult ending. After white’s 28.Ng3, Anand thought for 30 minutes and must have felt something had gone wrong after 28…Ne5. A forcing line ensued after 29.Rh8+ Rg8 30.Bxe5 fxe5 (30…Rxh8 31.Bxf6+) 31.Rh5. In most variations white ends up with dangerous steamrolling pawns which would afford white good winning chances and probably the end of the match.

Anand played the zinger in 31…Bxg4! and a battle within a battle was launched. After the piece sacrifice, fans had to turn off the chess engines which are materialistic and still don’t understand the nuances of some unbalanced endings. After 33.Rxe5 b6, Stockfish gave white a 2.22 evaluation. Most others agree that there was a lot of chess to be played… literally.

For the next 40 moves, white was trying to immobilize the black pawns and create threats, but the white couldn’t help because the black rook would harass it endlessly. Anand came up with the study-like 70…bxc4! and paralyzed white’s progress after 76…Rc3! White’s last pawn was eliminated and while white eventually rounded up black’s pawns, he couldn’t win the R+N vs. R ending after trying for 20 moves. 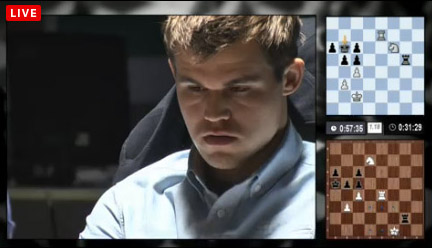 Carlsen tried to crack Anand’s fortress, but it was in vain.

So Anand holds the draw and it should give him a sense of relief and satisfaction, but he has to go back at it tomorrow after this 122-move marathon. Much is being made of the drain on Anand’s energy, but it appears that he is up to the task. His team will force the issue with some deep prep from the white side to pull even. Meanwhile, another win by Carlsen would put him in the driver’s seat to defend his title.