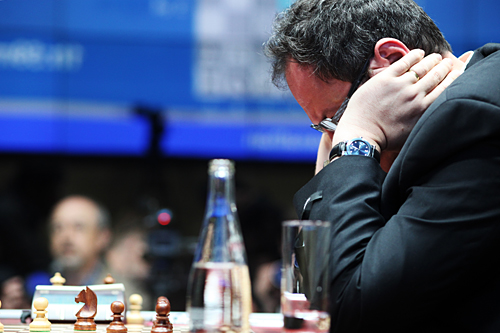 Gelfand trying to find a way.
Photo by Alexey Yushenkov.

Not much in today’s game, but there was an interesting pawn sacrifice after 14…O-O 15. Nxd5 Bxd5 16. Bxd5 Nxd5 17. Rxd5. White immediately gave the pawn back after 17…Rac8 giving black adequate compensation. Gelfand stated that he did not attempt to hold onto the pawn because he didn’t see a way of developing his queenside. Thus, after 18.Bd2 Bxe3 19.Bc3 the game was roughly equal. Gelfand tried to probe the kingside with 22.h4 Qc6 and 23.h5, but the game petered out quickly into a lifeless bishop ending.