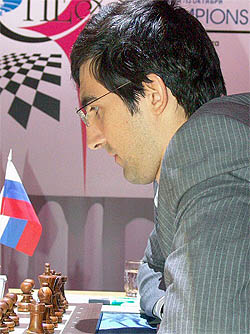 Vladimir Kramnik went into this highly-anticipated match with a reputation as a superb match player. While his reputation is more legend than fact (having lost several matches), he is the only player to have beaten Garry Kasparov in a match. Kramnik was actually a slight favorite in this match, but no one felt the former champion would find himself down three games to the reigning World Champion Viswanathan Anand.

Anand has clearly executed the right strategy by complicating the game whenever possible and reaching sharp, dynamic positions. Kramnik has often been flat-footed in his preparation and in games 3 and 5 he took a bitter lesson, losing in the same line. Kramnik strategy has traditionally been “win with white and draw with black.” This appears to have become an outmoded strategy in the age of databases and Kramnik has paid a heavy price losing horribly with white twice and then losing a technical game with black in game 6.

Anand has shown resiliency in his play and his games bear some of the freshness of Kasparov and others have the technical nature of Karpov. Kramnik, on the other hand, perhaps anticipated 1.e4 from Anand and seems a bit out of sorts by his switching to 1.d4. In the remaining games, we may see a divergence since Kramnik has to play with more risk. Kramnik has said he’s taking one game at a time, he doesn’t have many more.

New in Chess keeps getting better!