In chess, an ambition may be to learn a particular opening, to beat a friend in five-minute chess, to win a club title, or another lofty goal. These goals may change over time depending on the progress of preceding goals. In chess, a handful of players decide on the ultimate aim of becoming a Grandmaster through the world federation known as the Fédération Internationale des Échecs, or by the acronym FIDE (fee-day). This is the highest level of mastery in chess.

Many often try to put the Grandmaster title a context and compare it with a similar activity. Some will say becoming a chess Grandmaster is equivalent to getting a Ph.D. Let us be more realistic and agree that the two processes are vastly different in their design and execution.

Is a GM title equivalent to a Ph.D. in Chess?

I remember reading an article on ChessBase where the author presented data citing the number of Ph.D. recipients at a California university (in one year) eclipsed the number of those earning the GM title (in the entire history). Thus, this was the basis for saying it is harder to get a GM title than to get a Ph.D. These arguments are dubious and would imply that rarity of completion determines difficulty of the task. Even if we say that at least a GM has a Ph.D. in chess, the comparisons are incongruent. The point is that chess is a totally different type of process.

For example, a chess player does not enroll into a highly-structured, multi-tiered program (like getting a Ph.D. degree) within an accredited institution, assigned to mentors for guidance and have to follow a stringent set of rules, and spend years trying to prove the value of esoteric subject matters. Even more challenging is having mentors and administrators who can determine whether or not you advance through three stages (i.e., coursework, qualifying exams, dissertation) each having its own set of rules and challenges. Fortunately, chess may be more practical because the individual has more control over their destiny. Much is based on attained individual results with each tournament being a rigorous staged exam.

What is a Grandmaster?

In chess, the Grandmaster is the highest level of skill attainment. These men and women have been sanctioned by the governing body as having demonstrated an advanced understanding of chess through sport competitions. The chess GM is not merely a supreme chess player, they have the keen ability to ask a series of precise questions during play. The difference between a GM and non-GMs is the GM not only has a deep understanding chess ideas, they also understand which situations to apply them and in which situations to deviate.

I interviewed GM Maurice Ashley in a segment titled, “The Mind of Grandmaster” and he talked about how a GM does not necessarily see the pieces as harboring unique movements, but vessels of energy to be employed in the given position. He stated that some situations causes a player to break long-established rules. Sometimes rules get in the way of the truth of the position. If one watches top level games you’ll see ragged pawn structures deliver a tangible value… or scattered pieces slowly gel into a coherent powerful force.

On a more practical level, a Grandmaster invariably serves as a model that aspiring chess players would like to emulate. Many GMs were traditionally aloof and kept a distance with non-GMs, but in the age of Internet chess, e-mail, text messaging, social networking, the barriers between GMs and non-GMs have been reduced. It is easier to approach strong players these days on a social level and this may be one of the positive side effects of technology.

Remember the chess player seeking to be a Grandmaster? The question he/she may ponder more than, “What is a Chess Grandmaster?” is “How do I become a Grandmaster?” This is not an essay on how to improve your skills to reach Grandmaster level because there are countless books and learning aids that do a great job. What this essay will do is give a basis primer on the technical process of achieving Grandmaster through FIDE. There are four things (at a minimum) that absolutely must happen to meet the basic requirements for becoming a Grandmaster.

As you can see, there are a number requirements and each has its own set of internal issues and politics. One is the stipulation concerning norms and rating categories that determine the number of points needed for a norm (see FIDE Handbook, section 1.4 on “International Title Regulations“). To give a thumbnail sketch, a player has to score a certain number of points given the strength of his/her rated opposition. The stronger the opposition, the fewer points needed; the weaker the opposition, the more points needed.

Ultimately the player’s federation is responsible for submitting the packet which includes, the title application form, norm certificates (with crosstable), a fee as required by FIDE.

The result is basically stating that a norm is the score expected of a Grandmaster given the strength of their opposition. In round robins, norm chances are strengthened since each non-GM will play all the Grandmasters in the field. In Open tournaments, you typically will play Grandmasters only if you are scoring well. Thus, you may not get paired with the required three GMs if you fall off the pace. There is a recent ruling that states that GM norms do not expire. At this point in time, there are no considerations for earning more than the required three. It may be a good future policy in FIDE to award bonus ELO points to those who earn more than the required amount.

Ultimately the player’s federation is responsible for submitting the packet which includes, the title application form, norm certificates (with crosstable), a fee as required by FIDE. There have been cases where the arbiter has not informed a player of receiving a norm and/or did not issue a certificate after the tournament. Sometimes the arbiters make mistakes, so it is up to the player to pay attention to these details. It is also up to the federation to investigate any problems with the application process. There have also been many cases where federations do not submit the proper paperwork, misplace the file… or forget altogether. The player may have to apply pressure in these cases.

The final step is conferral by FIDE. The governing body has a committee called Qualification Commission and they view all the applications to make sure all the requisite documents are present. They then proceed to vet the applications to ensure that the tournaments are FIDE sanctioned and that the player’s norms are legitimate. Once the packets are found to be in order, a vote is taken and conferral is granted.

One of the most controversial rules in FIDE is the automatic granting of titles. The problem has come at the International Master (IM) and FIDE Master (FM) level where problems of credibility have surfaced. For example, in weaker chess regions where there are few titled players, automatic awarding of titles are looked at with disregard by peers who earned titles through three norms and rating requirements. There are many cases where players earn the IM title and their ratings are well below the required 2400 level… in some cases as much as 300-400 points! This denudes the value of the title and this practice should cease. Such problems are not likely to occur with the GM title, but the biggest problems may be the legitimacy of tournaments where there norms were earned.

If one achieves the Grandmaster title, it is certainly an accolade worthy of praise and like no other. However, it carries different meaning in different societies. Many Grandmasters are shocked when they travel to a foreign country and do not get the public respect they feel they deserve. I remember some Russian émigrés coming to America in the 80s getting this rude awakening. I once heard a true story about a person who was hosting a top Grandmaster in Israel, a powerful chess nation. The two go into a business establishment where they chat with the owner. The host excitedly introduces the owner to the Grandmaster. The host politely shares in the excitement, but asks the Grandmaster, “So… what do you do for a living?” 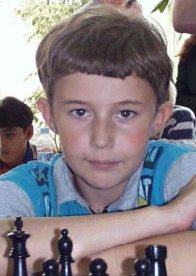 GM Sergei Karjakin
at 12 years old!
Photo by ChessBase.com
Most people do not understand what a Grandmaster is and it is due to the failure of marketing chess. FIDE should make sure that the prestige of these titles are kept meaningful. There is a question of rating inflation and there are those who say that GM title is not as meaningful as in the 50s and 60s. There is a divergence of opinion. Some say that chess players have simply gotten a lot stronger in a shorter timeframe. I would agree.

The Ukraine’s Sergey Karjakin earned the GM title at 12 years and seven months and that record will certainly be broken one day. Regardless of where you stand in this argument and which path you have trodden, represent the GM title with class… and give back to the chess community.

Listen GM Maurice Ashley’s insight on the GM title,
“The Mind of a Grandmaster”
Composed: 26 July 2008

Simutowe in play at Dutch Open

Ever thought about becoming a Grandmaster?