On the African beat, Kenneth Boikhutswane penned a recent article in his usual excellent style announcing the top four Olympiad team members. It represents nearly a complete turnover of the team from 2006. Only Tebogo Pitlagano have played for the Botswana side. He will be joined by “new blood” Barileng Gaealafshwe, Bojosi Sabure and Moakofi Notha. The final spot will be fought for by Olympiad veterans Ignatius Njobvu, Phemelo Khetho and Providence Oatlhotse… all past and present national champions. Intense! 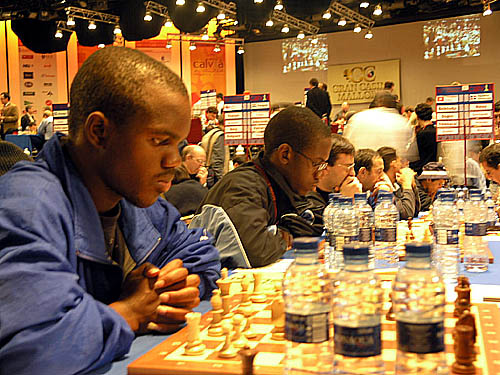 Botswana’s Ignatius Njobvu and Phemelo Khetho on the move at 2006 Olympiad. Both will have to fight to earn a spot on the 2008 team. Photo by Daaim Shabazz.

Following a gruelling 14 double-round robin tournament, four players have booked themselves a place in the provisional Olympiad chess team. The qualifiers were played over three weekends. Barileng Gaealafshwe scored 9.5 out of 14 points to top the competition followed by Tebogo Pitlagano with nine points. The pair of Bojosi Sabure and Moakofi Notha were third with 7.5 points.

The leadership of the qualifiers changed three times before Gaealafshwe emerged tops. In the first games in May, Edwin Kabelo forged ahead only to be overtaken by Sabure in the second round. Cinky Boikanyo was in the lead with five points for the homestretch but in the final weekend, there was a dramatic turn of events when three losses in a row saw his chances of making the team go up in smoke.

Gaealafshwe, Pitlagano and Sabure took advantage to vie for top spot. The first games between the three players pitted Gaealafshwe against Pitlagano. The two went for each other’s throat in a complicated Sicilian defence opening. With both kings under fire, Pitlagano was the first to blunder and suffered a dramatic defeat. Two rounds later he was up against Sabure in a game that had great significance because Gaealafshwe looked poised to scoop first place. The young Sabure put Pitlagano under tremendous pressure, but when he was expected to cash in on his good position, he allowed his opponent to make a better queen ending. Sabure could still have easily drawn the duel but he looked shell-shocked after squandering a good position. Hence he did not defend accurately and eventually he resigned. Notha made a late rally with wins over Boikanyo and Kabelo to make the top four.

The provisional team has been selected and now the next battle facing local players is the South Africa Open taking place from July 4-12 in Centurion, Pretoria. The four players in the Olympiad team will be joined by Ignatius Njobvu, FIDE Master Phemelo Khetho and national champion Providence Oatlhotse for the South African event. The performance of the players in Pretoria will be used to decide who makes the final team for the Olympiad to be held in the German town of Dresden in November. From Pretoria, the team heads straight to Maputo, Mozambique for the zonal competition from July 13-20. It is expected that the two tournaments will give the players the much-needed practice before the Olympiad.

'Tireless Tate' on the beaten path!