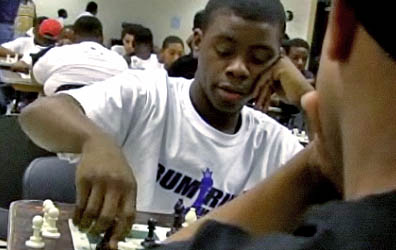 Interesting article in the Washington Post about a young teenager who is trying to figure out his life by utilizing chess strategies. We have been hearing this a lot in the past 7-8 years with many different initiatives such as Adisa Banjoko’s Hip-Hop Chess Federation (HHCF) and Orrin Hudson’s BeSomeone. Neither were the first to put these issues on the table, but both have catapulted the issue in the forefront with their organizations.

Marte Gardner is a 15-year old who finds that he has to use strategy to survive on the streets… an unlikely application for chess, but we are hearing it more and more these days.

This is the reality of some children in Washington, where survival games are played at every level, some more fatal than the next.

But it doesn’t have to be like that, they tell him at the rec, if you use the same strategy that you would use in chess: Look in front and behind at the same time and know that no piece is to be taken for granted.

It is the same strategy Marte has to use each day: to get to class at Eastern Senior High School, to move around his new neighborhood, where it is dangerous to be like him, new and not known. So he rolls with a swagger as he makes his way alone across the board of life. No rooks, no bishops, no knights out here to defend him.

Using these survival strategies, Marte took the bus to the Recreation Center to participate in the “Bum Rush the Boards” tournament sponsored by Words, Beats & Life organization. Their mission is to teach kids life strategies and encourage them to express themselves in hip-hop culture. Hip-hop seems to be the language that organizations are using to reach the youth these days. The article states that there are lessons not only in chess but in “DJing, art, fashion design, poetry and the lives of cultural revolutionaries.”