Chess has become part of the mainstream of activities on the world stage as news stories are bombarded with quips and headlines using chess metaphors. Does this mean that chess has become more approachable or is it merely a fashion statement that people make to associate with an “intellectual” activity? In these days of gamesmanship, is chess being properly positioned to attract more enthusiasts? If not, what are some suggestions? Interesting questions.

One of the biggest problems with marketing chess is its supposed relationship with intellectualism. People simply feel intimidated by all the strange-looking pieces and the seemingly complex rules. Honestly, chess has little to do with the type of intelligence that people associate with being “smart.” Chess relies more on spatial abilities, pattern recognition and memory. If chess were merely an intellectual exercise then the strongest players would be those with advanced degrees or some specialized skill. This is simply not the case.

Chess is an activity that is played by about as diverse an audience as one can imagine. Travel to any given tournament in the U.S. and you will span all possibilities of age, gender, ethnicity, nationality, personality, physical stature, educational attainment and social class. It is perhaps the only competitive activity where an important millionaire business executive can meet an opponent who has just reached his/her 6th birthday, or even someone who appeared as if he were straight from a homeless shelter… certainly improbable events in the real world.

However, chess is often cast in the media as some esoteric activity that only a select few can hope to master and is often used in racial propaganda. Racial classifications which note intelligence levels are often biased and skewed to reinforce existing paradigms and theories. In contemporary science, there is still the thought that people of African descent are superior in activities which require physical gifts, but are less accomplished in intellectual pursuits… despite a long history of inventive accomplishments within the Black Diaspora. One only needs to look as far as white supremacist websites extolling the intellectual differences between races.

A rudimentary theory could be hypothesized that “since chess is an ‘intellectual’ activity and relatively few Blacks have mastered it, then Blacks are not intellectual. QED.” There are many problems with this theorem, but the most important uncontrollable factor is economics. Chess is not perceived as an activity that will earn the participant future returns despite the investment of an inordinate amount of time in mastering its intricacies.

Many decisions made by those in the Black Diaspora are based on cost-benefit analysis, so chess is not often considered an activity which measurably improves one’s economic potential. In fact, tournaments tend to be very expensive (e.g., travel, hotel, entry fee, food expenses) and the potential returns are small. These issues are so much more acute since a large number of Blacks around the world are situated in the lower economic classes.

I still hear people claim that “Black folks don’t play chess” and there are few visible role models to break this mindset for Blacks. To date, Maurice Ashley is the world’s only Black Grandmaster. As long as he is alone, he will be viewed as an “exceptional case” despite promising talent in the pipeline (e.g., Amon Simutowe, Robert Gwaze, Pontus Carlsson). Of course, chess is popular leisure activity throughout Africa, the Caribbean and Black America, but the economics of chess does not always allow for total immersion in its study. Economic and marketing support to reach wider audiences will be key in chess promotion.

Scholastic chess has blossomed into a viable business model. The latest debate in the U.S. is whether chess promotion should be handled by non-chess sponsors or chess-oriented entities. Many of the largest scholastic activities in chess have been sponsored by large corporations who derive a benefit from their demonstration of corporate social and civic responsibility.

Chess has been featured in many educational studies which prove that it is able to help children improve their spatial and cognitive abilities, pattern recognition, analytical skills and discipline. It has also been used as a way to develop social skills and to help assist in boosting self-esteem. However, there are critics to the trends of commercializing scholastic chess to the point of making it trivial.

An interesting point was made in Thomas Braunlich’s essay, “Scholastics and the Soul of Chess,” where he opined that chess should be promoted more for its long-lasting benefit than for its short-term “feel good” effects. He discusses the fact that scholastic chess, in actuality, does not groom future Grandmasters, but is only used as a sort of revenue generating event and for marketing exposure. The point is… everyone wants to be affiliated with chess because it is considered “cool,” but grooming strong players is not on the agenda. 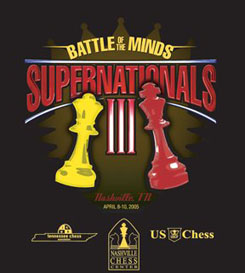 Scholastic chess events today are primarily about marketing for the sponsor and making the participating children feel good about accomplishing something. We continue to rave about a 6-year old player who knows how to move the pieces! We also hear about a young player who is declared the “national champion” after winning a trophy in a beginner’s section.

This well-intentioned media exposure can have negative consequences. The attrition rate for chess players is atrocious (especially among girls) and players like Hikaru Nakamurais only notable player (of late) to have emerged from U.S. scholastic circles. Why do many of these young players quit chess shortly thereafter? Perhaps Braunlich’s claim of “trophy inflation” deserves merit:

When I won 3rd place in the 1977 U.S. Junior Open I got a simple little trophy of which I was very proud because only a few trophies were given out. But I wonder how a kid today feels about winning a big trophy for 23rd place in the under 1000 section of a scholastic national? Is he proud of it? Many chess players would consider it a symbol of mediocrity and chuck it! I’m no educator, but I can’t help but wonder if it is really good for them to reward mediocrity so strongly.

Who is the Real Champion?

Much of the image of chess is often hoisted upon the shoulders of the sport’s best player and/or the world champion. Is the fragmented chess world creating a lack of enthusiasm for chess as a viable sporting opportunity? The instability brought on by the lack of a unified World Championship cycle does make it very difficult to present chess as a sport worthy of lucrative and sustained sponsorship. The current crisis in the chess world has exposed problems in fundraising endeavors despite attempts at popularizing “Man vs. Machine” matches and other novelties.

What company will invest in a sport that can claim to have several world championship matches in the same year? Besides the fiasco involving the Men’s World Championship cycle, the women are not immune either. Last year, Antoneta Stefanova won the title of FIDE Women’s World Champion. Months later that year, Almira Skripchenko of France and Irina Krush of the USA played in a match that was billed as “searching for the best woman chess player in the world.” Zsuzsa Polgar is sometimes mistakenly referred to as the Women’s World Champion while her inactive sister can lay claim to being the world’s highest rated woman (by more than 100 FIDE points). These scenarios represent a marketing nightmare for a chess company looking for sponsorships.

What is to Be Done?

There are constructive steps that can be taken to improve the image of chess.

These are just a few suggestions to correct some of the most common problems with the image of chess. Chess metaphors continue to be used in mainstream media and chess is still an apparatus (rightly or wrongly) used to measure intelligence. It appears as if chess does not receive support because of very basic misconceptions which can be corrected with a little effort. People WANT to learn how to play chess, but they are often intimidated because of misleading information and misinformed people who perpetuate chess myths.