We are officially amidst a chess renaissance in the U.S. With SuperNational scholastic tournaments drawing more than 5,000 players, St. Louis becoming the centrifugal force of growth of American chess (with St. Louis Chess Club, World Hall of Fame and Webster University) and increase in competitive tournaments, chess has never been more popular.

During this current boom of scholastic chess, America has seen a resurgence with several home-grown players emerging amongst the world elite. CIS has been part of this successful surge. While St. Louis, Missouri may be the growth center of chess, New York can still be considered the capitol of chess activity. Chess-in-the-Schools (CIS) has been a successful institution for nearly 30 years and has assisted in this renaissance. 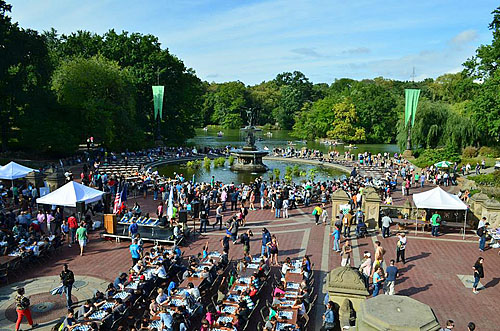 For the past 13 years, CIS has held the open-air chess festival featuring fun and games. Grandmasters are giving exhibitions with puzzles, prizes and the event is capped off with a 10-minute rapid chess tournament on September 21st. The event was organized by the Parks Department and CIS at Central Park near the Bethesda Fountain. Young scholastic star Josh Colas from White Plains was the two-time defending champion. Five-hundred boards were set up for a crush of players from around the New York area and a chance at local bragging rights. 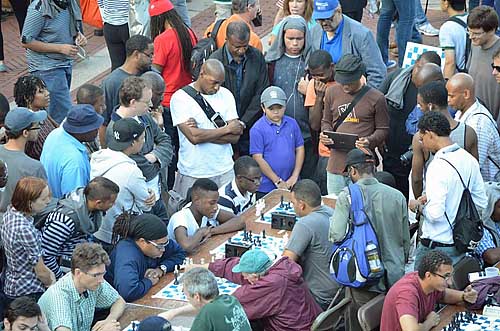 Battles of the top boards!

In the end, 600 players competed and it was scholastic stars James Black, Jr. and Justus Williams tying for first. Black won a two-game playoff over Williams. Josh’s father Guy Colas made this statement…

It was a great tournament with over 600 players banging away in Central Park. The gentleman to the right of James (Lev Alburt) was the top seed. In the crucial round 5, James dispatched him in spectacular fashion. Going into the six round, it had seemed as if Josh was on his way for a 3-peat. Once again, he had to face his rival, Justus Williams. Josh had control of the game; it even felt as if Justus would be mated any seconds. Out of no where, Justus found one check that led to Joshua’s king being chased around and got mated. Now it was the final between James and Justus. It was the best out of 3. The first game ended in a scramble and James prevailed on time. James won the second game and became the 2013 Chess-in-The -Park champ! It was great to see them (James, Justus, Josh) come in 1st, 2nd and 3rd. 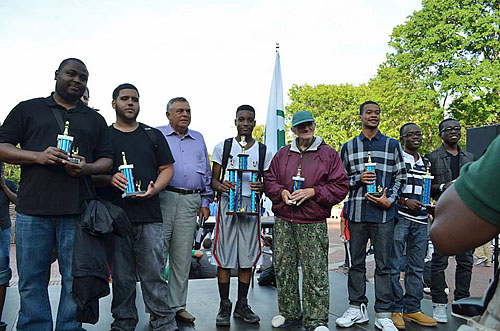