’13 World Candidates down to wire!!

The 2013 World Candidates tournament is entering its last two rounds and the result is still in doubt. While two players have a reasonable chance of winning the top four are mathematically eligible to win. Two points separate the top four positions with Vladimir Kramnik atop the chart with an undefeated 8/12. What is remarkable about Kramnik’s rise is that the second half of the tournament, he has run roughshod over the field with 4.5/5 including a pivotal victory over fellow contender Levon Aronian. 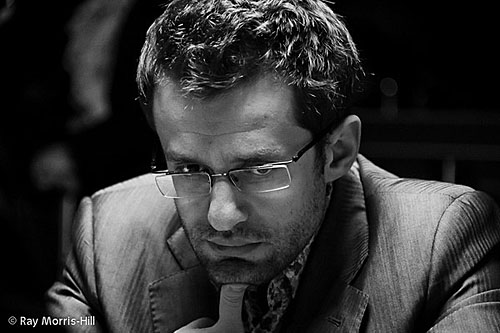 While Vladimir Kramnik has scored 4.5/5 in the second half, Levon Aronian has hit a bad patch with 1.5/5. Photo by Ray Morris-Hill.

The tournament has had a number of exciting moments aided by the fighting spirit of the players. Carlsen has received most of the attention and many predicted him to win the tournament with an undefeated score. His shocking loss at the hands of a beleaguered Vassily Ivanchuk put his world title hopes in jeopardy. He will have to press in his final two games against Teimour Radjabov and Peter Svidler. Frontrunner Vladimir Kramnik will play Boris Gelfand and Vassily Ivanchuk, both tough outs.

There is a notion (on many chess forums) that there is collusion taking place to prevent Carlsen from winning. These assertions seem dubious as several of the players were taking their final shots at becoming World Champion and all are indeed professionals of the highest order.

Carlsen has the youth, vigor and strength to compete, thus no amount of collusion could ever stop good moves from being played. However, Carlsen has shown frustration in his handling of a few games in the second half. His nerves will be tested in these last two games.

(Note: ChessBase has been publishing a series of articles calculating the odds of the winner. Very biased towards Carlsen, but very intriguing! https://www.chessbase.com/Home/TabId/211/PostId/4009336/candidates–tiebreaks-chances-of-winning-310313.aspx)

This has been a very exciting tournament with 20/48 games with decisive results (41.7%). Here is a look at some of them.