There are a lot of stories about how chess can individuals in a myriad of ways. Chess often finds a home in prison as the offenders can find the activity helpful in the coping process. Why chess?

Perhaps it is the ability to control one’s fate in a place where they are otherwise subjected to someone else’s total control. Maybe it’s a form of escape into a world of 64-square intrigue. Maybe it’s the idea that some inmates are able to channel their aggressive energy in a more disciplined fashion. (article about prison chess in U.S.)

A recent story about prison chess in South Africa highlights the efforts of the Gauteng South Chess Association at the Boksburg prison. Adam Wakefield reported that the 4000-count prison has helped the prisoners deal with the isolation and rejection that is often associated with the shame of incarceration.

Victor Modise, 28, four years away from release, is one of them.

“When I’m playing chess, I’m relaxed. I forget about most things here, about my problems. I grew up a hard way so I’m just trying to forget those things. In prison we get frustrated, and sometimes you get angry with yourself… ‘Why did I do that? How did I end up here’. When you are playing chess, you get relaxed and go down with it. You start thinking positively, and thinking of changing.” 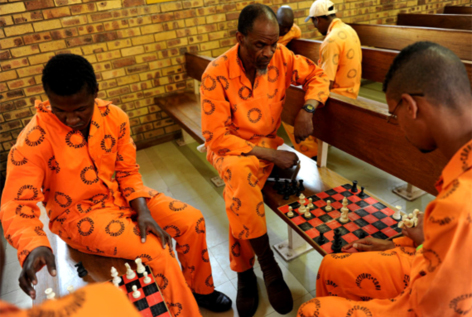 Having done our part reintegrating these guys back into society, we still have resistance from the public, in terms of stigmatising these offenders, even though we believe they are already changed people. So, having partners such as the GSCA, helps us in terms of incorporating these people, helping with public acceptance. We are about second chances,” he says.

South African player Daniel Cawdery serves as the chess coach at the prison and is planning on making frequent visits.

World Championship only weeks away!