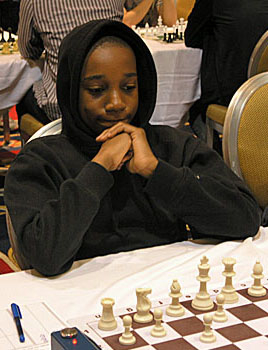 James Black has been the subject of many articles, but his rapid progress is taken on new heights. Black has now vaulted over 2300 in the USCF rating list and recently showed off his famed blitz prowess in beating both IM Greg Shahade and GM Grigory Kaidanov in blitz battles.

After Justus Williams demolished the field at the U.S. Chess School with 13.5/14, both he and Black (second with 10/14) got a chance to mix it up with these veteran masters and the teachers at the camp.

Williams was unable to continue his blazing form against Kaidanov, but his friend and fellow 13-year Master Black would beat both Shahade and Kaidanov in an impressive display. The action was caught by Elizabeth Vicary who coaches both players at I.S. 318. What is certain about Black is that his work ethic is paying off. Check this out!

Take Me Home: Ashley in Jamaica