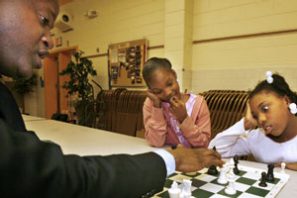 National Master Glenn Bady of Challenging Heads Chess has noticed that GM Maurice Ashley (left) is scheduled to speak at the World Conference on Chess-in-Schools. The event will take place in Turin, Italy from February 25-27th and will be attended by FIDE President Kirsan Ilyumzhinov.

Ashley is best known as the first “African-American Grandmaster” and for his television chess commentary. Before gaining such notoriety, he was a successful chess coach and ran programs for the Harlem Educational Activities Fund (HEAF).

Ashley, author of Chess for Success,” is sharing the keynote address with Dr. Sulaiman Abul Kareem Mohammad Al-Fahim who organizes chess programs in Dubai and conducted a study titled, “The Development of Chess in Schools in Arabian Countries. The Role of Learning Chess for the Education of Arabian Girls.” The two will speak on “The role of chess in the development of personality.”

This conference will feature a number in interesting sessions and will perhaps spur more initiative in making chess a compulsory activity in the schools. Such an idea has already been implemented in several countries. There will be representatives from around the world however, there are no speakers from the African continent.

The Chess Drum is 8!