More crackers to snack on! This month’s Olympiad edition brings fireworks. Botswana’s national champion Phemelo Khetho made quite an impression with his win over an IM from Indonesia, Sadikin Irwanto. He plays a slow and stodgy KIA, but builds up a lethal attack with a number of killer moves! Very difficult problem. 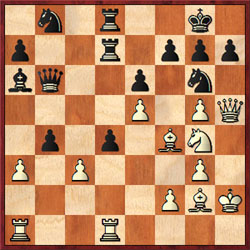