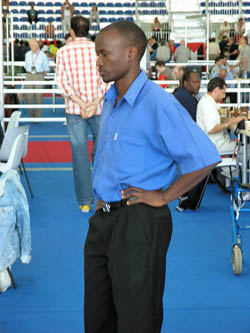 The biggest delegation was the nineteen-man delegation from Egypt while the smallest was a one-man delegation. An arbiter’s course run for some days during this period, in which one could get all three arbiters norms by passing the exam. A delegates meeting was held in which it was proposed to start an African club championship. Egypt was ratified as the first host of this event. At the same meeting, it was taken that Uganda is organising the upcoming Africa Junior Championship.

I was unable to attend the opening ceremony as I arrived on the morning of the start of the games. Fortunately, I managed to get some sleep during my 9½ hour flight to Windhoek. On arrival at Hosea Kutako airport, I was picked by the chess officials, after over an hours wait. By this time, I had met IM Oladapo Adu (Nigerian player based in USA) and Jackie Ngubeni (South African delegate), who had just arrived from Johannesburg.

After the forty five minute journey from the airport to the Safari Court Hotel, and the registration regularities, it was now about two hours to the start of the first round. International Master (IM) Sarwat Walaa from Egypt was my opponent. It felt good that I was to play him. There was no time to prepare for my opponent, besides I was a bit tired. The games started at 1500 hrs after a few announcements. During the game, the IM sacrificed a pawn and later an exchange, probably hoping to get to my uncastled king. I later gave him back his pawn, but kept the exchange! After my forty seventh move, the IM had had enough and resigned. Naturally, I had a good long sleep! (see game)

IM Amon Simutowe the Zambezi shark was my opponent. I spent a great deal of my morning preparing Sicilian lines and a bit of Caro-Kann, an opening I had seen him play lately. He played the Caro-Kann defence and I obtained a tenable position which I should have drawn fairly easily.

Perhaps I should mention at this point that I did not really have any match strategy. Go out and play the best chess I can each game was my ‘strategy’. A win is always the best result!

Towards the endgame, my opponent declined a draw offer and later on, rather than staying-put and waiting to see how he planned to win, I ventured planlessly and sure enough I got punished. This loss haunted me through the night. My lesson was well learnt, so I thought.

Egyptian IM Hassan Sayed Barakat got off well in the opening having got me off balance with his f4 Sicilian. I struggled through the opening but managed to get a sound position later on in the middlegame. In the endgame, in an equal position (at least in my opinion, my opponents opinion as well as fritz’s), I handed my opponent the full point on a plate. This loss and my first cemented some lessons in my mind! You don’t play moves just for the sake. Another day of hard preparation ended sour.

This round promised to offer me some solace. Alfred Chimthere from Malawi had the black pieces. I could not find any of his past games and so unlike my two previous mornings, I was free and went to town to tour!

During the game, I got a comfortable advantage in the opening. However towards the endgame, I thought I was playing Gwaze! I won the game but after a tense fight and lots of assistance from my opponent.

One delegate had earlier on jokingly said to a woman player from South Africa having a tough time. “Hey, first learn how to swim, don’t just jump into the deep end; this is the deep end in Africa!”

IM Kenny Solomon from South Africa was my opponent. I had played him eight years ago at the African Junior chess Championship in Kampala. In that game, his first move was e4 and he beat me. After the game, he told me that he is a d4 player and that he had only played e4 because he had seen me respond to e4 with the Sveshnikov variation of Sicilian defence (a defence he employs himself against move e4). He actually said he did not know what he would do had I responded with say the Caro-Kann defence! I took not of that!

This time I knew for sure that he would not gamble on me. I spent the whole morning listening to a Kings Indian Defence DVD, another opening I am taking on for black. Soon it was time for the games to start however, I had not looked at sufficient games covering the numerous lines.

Both Solomon and I blitzed through the first nine moves of the Kings Indian defence opening. Thereafter he played a move that was not mentioned by grandmaster Roman Dzindzichashvili in the dvd! (10.c5) I spent over an hour on the next four moves, after which my position was losing. I played on to avoid the embarrassment of losing a game in fifteen moves. It was after move thirty six that I signed the score sheet.

With two points out of five (eventual winner IM Robert Gwaze had 5/5 at this point), I was starting to feel a little edgy knowing that I needed 4/4 in the remaining games if I were to get the IM title. Getting the IM title was one of my targets in this tournament. My opponent was unrated Roberto Erikson from Angola. I tried to corner the young man (born in 1992), but he was not forthcoming! We shared the spoils.

Obtaining a score of 6/9 is was now no longer possible for me. Perhaps it was time to think of finishing with a decent score and improving on my rating, I thought. My fellow East African, Ben Magana (Kenya) was half a point ahead of me. I wanted to finish ahead of him, I thought.

Chambule Pedro Lucas from Mozambique had the white pieces. I played my favourite Sveshnikov Sicilian and quite early Lucas lost a knight and later the game. Now, with 3.5/7, the Fide Master title was firmly in sight. I reckoned I only needed two draws or one win out of the remaining two games.

Zambian strongman Stanley Chumfwa was my opponent and had the white pieces. I was happy about the challenge but was not happy that the pairing computer had given me the black pieces for the second time in a row! I double checked the pairing and sure enough I had the black pieces.

I played my favourite line again however in the middle game through to the endgame, I got outplayed by the Zambian.

Fide Master Alice Mateus Felizardo Viageirof from Mozambique was my opponent. With 3.5/8, I needed one more point from this last game to earn the Fide Master title.

Right after my breakfast, the tournament organiser informed me of a meeting of delegates, saying I had to attend because they needed feedback from Uganda concerning the upcoming African Junior chess championship.

I duly attended the meeting however I did not return after the short break, realising that I might do a better job on the chessboard!

On looking up games of my opponent, I realised that I neither had the time nor the mood to prepare for his Sicilian lines. I thought to myself that perhaps this is the moment for me to unleash (for the first time in my chess tournament life) a move other than 1.e4. I had been studying the Kings Indian Attack some months earlier and furthermore, my roommate (IM Oladapo Adu from Nigeria, who plays it) had said some nice words about it, saying that it’s a main weapon for Grand Master Bassem Amin (highest rated player in the tournament).

It felt great to play 1.Nf3 in the final round. My opponent appeared to want to have a quick game and get on with other things! Nothing short of the full point was good enough for me so while my opponent made rush moves and went to watch other games, I took on a more cautious approach. Later on, my opponent reduced on his movements!

In the endgame, my opponent was generous with his draw offers, but I would not have any of them. Our game was the last to finish but finally the full point came home! A score of 4.5/9 earned me the FIDE Master title.

The ceremony was colourful, the winners were rewarded. A great tournament it was.

The tournament was organised under a competitive atmosphere.

My Overall performance of 4½/9 points earned me the title of FIDE Master. I hope I did my country proud.

Mr. Harold Wanyama, probably the best blitz player Uganda has produced; Mr. Isaac Munanaira, arguably Uganda’s most methodical chess player, Both of whom encouraged me to write up this document.

To God be all the Glory.

The Importance of Chess Literacy