“It should be noted that current opening variations come and go, and the evaluation of certain positions change, but the value of knowing how to play endgames well remains constant.”

When I was an up-and-coming junior player, I basically studied openings… all day long. I paid little attention to the endgame because I felt if I knew the openings well, I’d get a big advantage and never reach the endgame. Well… that was true until I started facing Masters and Experts on a consistent basis. My lack of appreciation for the endgame often cost me half points… either drawing winning positions, or losing drawn positions.

I purchased the Batsford Chess Endings (BCE) book by Jon Speelman, Jon Tisdall and Bob Wade and I was hooked on endings. No longer would I try to avoid endings. I would feel comfortable enough to trade down and squeeze a win. Years later, knowledge of endings could not be more crucial. With the use of databases proliferating everyone has access to the same opening knowledge. Now beginning level players can play routine book moves with a strength of a GM. Thus, they can now get to the endgame where they may be much weaker.

In the 2007 World Open, I played a few games where my appreciation of endgames was useful. One of the games was an opposite-colored bishop ending. On the left is a position I found in the Batsford Chess Endings book; on the right was a position I had in a game against Zahkar Maymin. 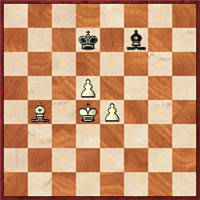 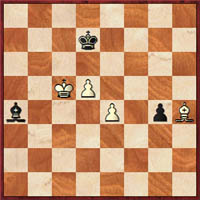 On the left, black has set up a fortress and the game is drawn (Averbakh study), but on the right, I was able to make the black king give way. It appears as if my opponent can get to the drawing position, but he cannot swing his bishop from a4 around to f7 in time… while keeping his king on d7. Notice the difference in the two positions. I didn’t remember the exact book position during the game, but I had an idea. Note… sacrificing the g-pawn makes little difference.

Following is another scenario: 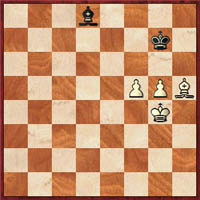 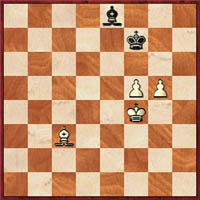 In this scenario (two files over), the bishop colors are switched and it makes a big difference! On the left, the game is drawn (Hennegerger study), but on the right in Simutowe-Ippolito, white was able to outflank the king and simultaneously prevent the bishop from blockading. The first position, the bishop provides the king with ample room. In the second, Ippolito’s pieces do not have enough space to set up a defensive front. The key is white’s control of the a1-h8 diagonal.

Perserverance is a must in endgames. Years ago I remember how impressed I was at the Nakamura-Simutowe game. Amon Simutowe played in what seemed like a drawn ending and was criticized for doing so. He said, ‘You sit there and keep playing until they give up.’ Of course, Simutowe sometimes takes this to the extreme.

At the World Open recently, Simutowe played another move after getting two knights versus the lone king against Ray Robson at the World Open. While Robson was quizzically pondering his move, Simutowe stopped the clock with a chuckle and gave the youngster his draw. Bobby Fischer did even better… he was once said to have played an extra move after only two kings remained! The article painted it as an act of intimidation to show how determined Fischer was to win! 😕