Chess is a game that we all love and enjoy for its build-up of tension and it infinite possibilities. Black chess players have recently begun to make headway into the upper echelons of the international chess arena. However, there was a historical precedent for Blacks in a mighty people who served as the genesis of modern-day chess.

Moors of Spain playing a casual game of Shatranj. Notice the royal setting. This picture is set in Castile and dated in the year 1283 AD.

Who were these mighty people? They were the Moors of Africa who led a militaristic campaign against Spain in 711 AD and brought with them a game called “Shatranj.” Shatranj was derived from Chaturanga, a board game originating in India in the 6th century which featured only four types of pieces: elephants, chariots, cavalry, and infantry. The Moors also brought another fame to Spain called el-Quirkat, a direct ancestor to checkers.

The Moors were a proud civilization known for spectacular advances in science which included tracing “the curvilinear path rays of light through air.” This is the forerunner of eyeglasses. The Moors also used the astrolab and compass for navigation and their methods of surgical medicine were at advanced states. 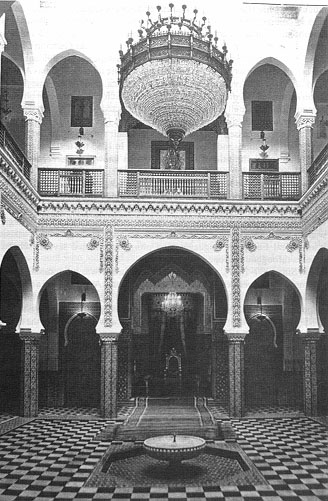 Palace in Tetouan, Morocco demonstrating the ornate beauty
and sophistication of Moorish architecture

They excelled in herbology and employed food preservation techniques enabling the storage of wheat for as long as 100 years! In addition, the sophistication of the cities in Spain was bolstered by the presence of stunning beauty of Moorish architecture.

Despite the Moors advances in science and scholarship, they also enjoyed activities such as horse-riding, marksmanship, polo, backgammon, and . . . chess. It is befitting that chess was a favorite Moorish pastime as many enjoyed the challenge of warfare strategy and tactics, and perhaps many were strong players. Although Hannibal, the Moor of Carthage (247-183 BC) would not have played Shatranj, his military ingenuity would indicate that he participated in some aspect of war simulation.

The Moorish empire went through many tests and dynasties before political and social fractures contributed to the downfall of an empire lasting almost 800 years. The Moors signed the act of capitulation (equivalent to resigning) and surrendered their last stronghold, Granada, in 1492. What follows is interesting. Queen Isabella (Isabel da Católica) of Castile was looked at as a key figure for her support in the “Reconquista” to drive the Moors from Spanish soil.

In addition to the Queen, King Ferdinand of Aragon backed Cardinal Ximenes de Cisneros who would order the destruction of Moorish libraries and mosques and subsequently, their expulsion and slaughter. After this period, Shatranj was modified!! New rules were added such as castling, two-square pawn advance, and en passant capture.

The Queen, just a bit-player in Shatranj, became the most powerful piece in tribute to Queen Isabella. It was known as “dama” in Spanish, or “dame” in French. The other pieces were changed to reflect the royalty of the Spanish empire and achieved popularity around the world. The greatest figure in early chess history was François-André Danican Philidor, a renowned player and composer. What happened to the Moors? After being forced out of Spain, most were driven back into West Africa, but many would later be recaptured and sold into America and the Caribbean as slaves. Some of these slaves (multilingual and erudite scholars) came on ships of Christopher Columbus who was commissioned by Queen Isabella to discover the “New World” round 1492.

About 510 years later, some of the descendants of these Black Africans are becoming reacquainted with a game that their ancestors brought to Europe and would become the forerunner to modern-day chess. One day Black masters of the world will rise to the top of the game that made their ancestors “Kings” of their day.

Lane-Poole, Stanley. The Story of the Moors in Spain. Baltimore, Black Classic Press, 1990 (first published in 1886).

Westerveld, Govert. “The Influence of the Spanish Queen Isabel la Católica on the New Powerful Dama in the Origin of the Draughts and Modern Chess Game.”