Nigerian International Master Odion Aikhoje finally receives the gold medal he earned on board two at the Elista Olympiad in 1998. Twenty-four years is short in terms of age, but to wait on something for 24 years is another matter.

The Chess Drum reported on Aikhoje’s triumph in the very first issue of the website in 2001. Several years later, the gold medal was to be in the hands of the Sports Minister to present to Aikhoje. The medal never made it to the ministry and was held by Theophilus Caifus pending his reimbursements for Olympiad expenses. The medal was kept in limbo for years. Here is a synopsis written by Kunle Elegbede.

At the 1998 Chess Olympiad which held in Elista Russia, we all know Odion won a gold medal, on board 2, for Nigeria. Mr. Emmanuel Omuku, the former Executive Director of the World Chess Federation (FIDE), a Nigerian, received the gold medal on behalf of Odion, who could not wait in Elista to receive his medal due to conflict with his travel arrangements. Mr. Omuku then sent the medal with a letter to the then Honorable Minster of Sports in Nigeria. This was done with the hope that it would be properly presented to Odion who had done the country proud and also to use the medal to promote the game of chess in Nigeria. With the medal on its way to the Sports Minister’s office, Mr. Theophilus Caifas, the Chairman of the Nigerian Chess Federation (NCF) at the time, intercepted this medal and the letter with a promise to deliver it personally to the Honorable Minster of Sports. (link)

There was an appeal to retrieve the medal after Aikhoje had written letters to Caifas and the Ministry, to no avail. In 2008 (10-year anniversary), there was a commendation to be delivered to Aikhoje by Kunle Elegbede in lieu of the missing medal. Of course, that was not going to substitute for the medal. So the fight continued. 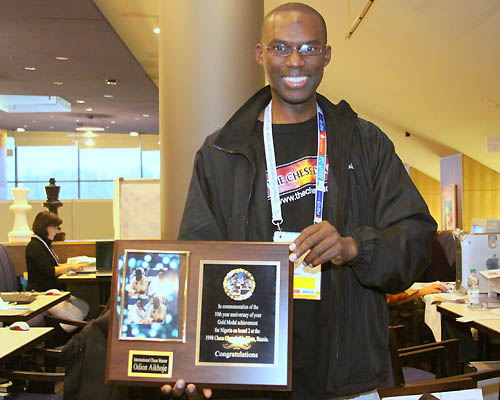 Administration after administration, the issue continued to tossed about with no clear resolution. A break came some 24 years later when the Secretary General of the Nigerian Chess Federation sent the following letter to Aikhoje. The medal would be presented during the Opening Ceremonies at the 2022 African Individual Chess Championships in Lagos, Nigeria. Appropriately, FIDE President Arkady Dvorkovich would be on hand to present the African legend with his honor.

After the Carlsen-Niemann firestorm, what now?