A couple months ago, GM Nigel Short contacted The Chess Drum and mentioned that St. Vincent and the Grenadines would become a provisional FIDE member. At the 92nd General Assembly meeting, St. Vincent as well as Belize, Dominica and Niger became full FIDE members.

Back in 2019, Short and Ian Wilkinson (then President of Jamaican Chess Federation) helped to bring SVG into the chess fold as they launched their nascent federation. This would rapidly progress and may have happened sooner if not for the COVID pandemic. Nevertheless SVG (population 111,000) hopes to make an impact in the Caribbean. 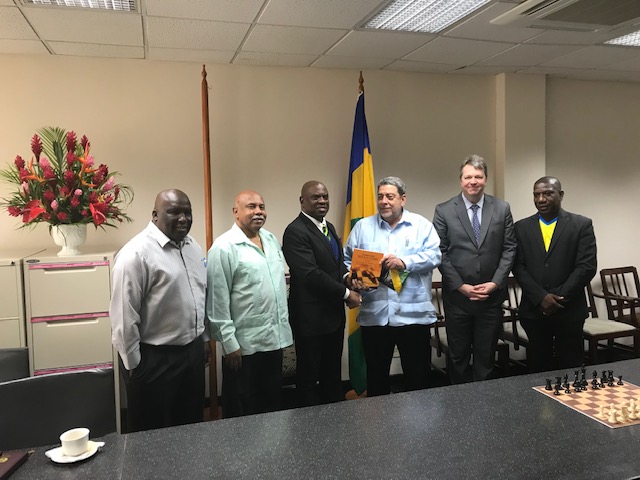 Belize has had an active chess presence since the early 1900s (see articles #1, #2), but has not been able to gain consistent footing. Nevertheless, the country had been active (in different degrees) from 1987-2006. In 2006, the chess community got a dose of adrenaline after a visit by FIDE officials.

In February of 2006, Mr. Jorge Vega, President of the Americas, and Mr. Allan Herbert, Treasurer of the Caribbean and the Americas, paid us a visit in Belize. Some of the executives of the BCF and the two gentlemen had a fruitful discussion.

Belize was featured in the same year on The Chess Drum after holding a youth tournament. There was a chess camp held by Ella Anderson in 2007, and in 2008 the reactivation of the Belize Chess Federation after its original founding in 1987. GM Maurice Ashley paid the Central American nation a visit in 2011. Ashley’s visit was part of the “Chess Olympiad” and was featured in a ChessBase article penned by Ashley. It also appeared here at The Chess Drum. On an island where cricket is the sport of choice, chess has made a foray in Dominica. Last year, the island announced its Board of Directors prior to applying for FIDE membership.

The interim Board of the Dominica Chess Federation. Caribbean chess is on the rise! #FIDE pic.twitter.com/9oPnaJxMrm

Last year there was a call out for players on the island in Emo News. Spearheading that effort was Ross Boyd, “an avid chess player for numerous years and a mentor to many players.” The article continued,

If you are interested in joining the community of chess players and helping further our goal in helping Dominica be represented under FIDE, reach out to us. Contact 767-225-4117 or 767-613-1022 to speak to either Mr. Ross Boyd or Mr. Nigel K. Francis respectively. Thank you for supporting us.

There was some question about whether Dominica would achieve the deadline for application, but they were successful.

Niger is a landlocked country of 24 million and had a long tradition of games. However, the game that one may see is Oware or Warri. However, one can find a few players on chess.com which is a sign the chess in bubbling above the surface. Last year on May 2nd, there was a “chess meetup” hosted by the Minister of the Interior. Hopefully, in the coming months, we will hear more about the newest African federation.