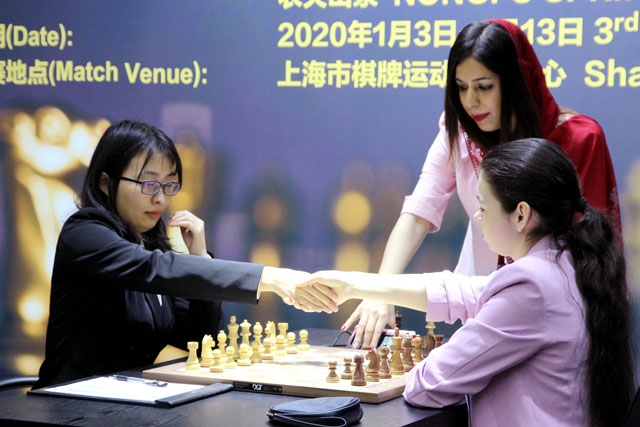 There was a surprise in today’s second game of the championship match. While we didn’t see 1.h3 or 1.a3, Ju Wenjun tried to catch her Russian challenger off guard with 1.e4! Bobby Fischer once said 1.e4 is “best by test.” Of course things have changed and the move has been toward more universal play.

Ju faced the Berlin and actually got nothing special after facing a novelty 12…c6. However, Aleksandra Goryachkina took a risk by playing 17…Bf5 when Ju could’ve played 18.g4! with an increase in space on the king side. After several piece exchanges the game ended quietly with another draw.

The second game for the Women's World Chess Championship between Ju Wenjun ?? and Aleksandra Goryachkina ?? ended in a draw after 40 moves.

Ju’s opening salvo can be taken as a “feeling out” of her opponent. Of course, there are not too many games in which to assess the weakness while playing in a hospitable environment. While Ju has proven she can win on foreign soil, it would be risky to settle for quiet positions and wait for her young opponent to stumble.

Lastly, there has not been much international coverage of the event. If you examine the Twittersphere, there are a few Tweets by FIDE and some other outlets but there is no attention being paid to this match. With Tata Steel right around the corner (and Magnus Carlsen playing), this will mire the match in the background.

In the largest prize fund in women’s history they will have to improve on the quality of the media coverage. There have been no spectators at the venue according to British Grandmaster Nigel Short, and that doesn’t bode well for the women’s circuit.