Maurice Ashley seems to be making Africa his third home. The Jamaican-born, Brooklyn-bred chess impresario has been making his rounds on the Africa continent (Kenya, Rwanda, Namibia, South Africa, Madagascar, Ghana and Côte d’Ivoire) for the past several years and making a mark in the process.

This year in May, he came to Abidjan, Côte d’Ivoire for the Grand Chess Tour event and served as one of the chief commentators for a tournament featuring World Champion Magnus Carlsen and several of the world’s top players. The event was a rousing success and set the bar for future African events.

Ashley told The Chess Drum in an interview in Abidjan that he would be returning to West Africa provide more training for these growing communities. Ashley returned to both Côte d’Ivoire (“Ivory Coast” in English) on October 3rd and Ghana on October 11th for training sessions and was met with warm receptions in these neighboring nations. He posted on his Facebook page…

“The first day of training in Abidjan was fabulous. Six hours of chess, a break for lunch, and a day full of love and excitement. Feeling very appreciated. And grateful to be able to make an impact. #chess #abidjan #cotedivoire #africa #passion #purpose” 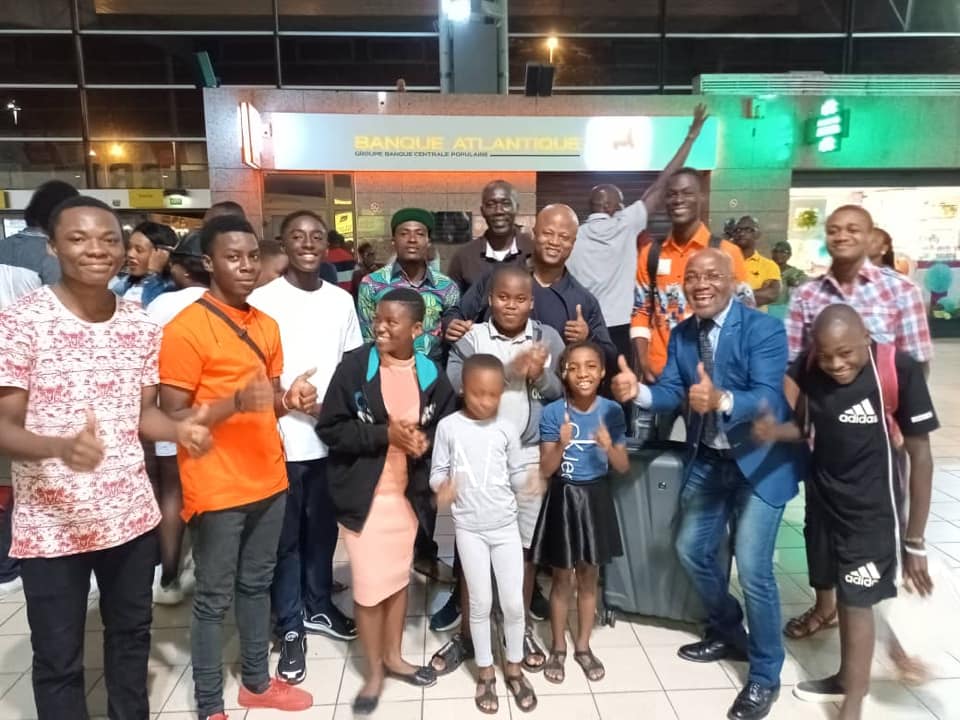 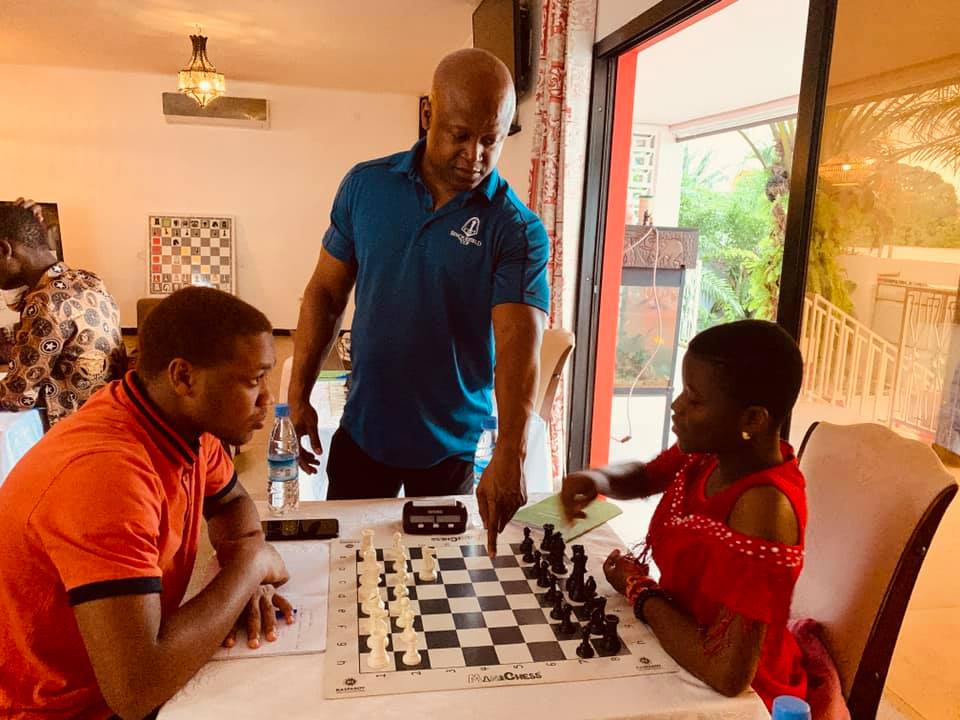 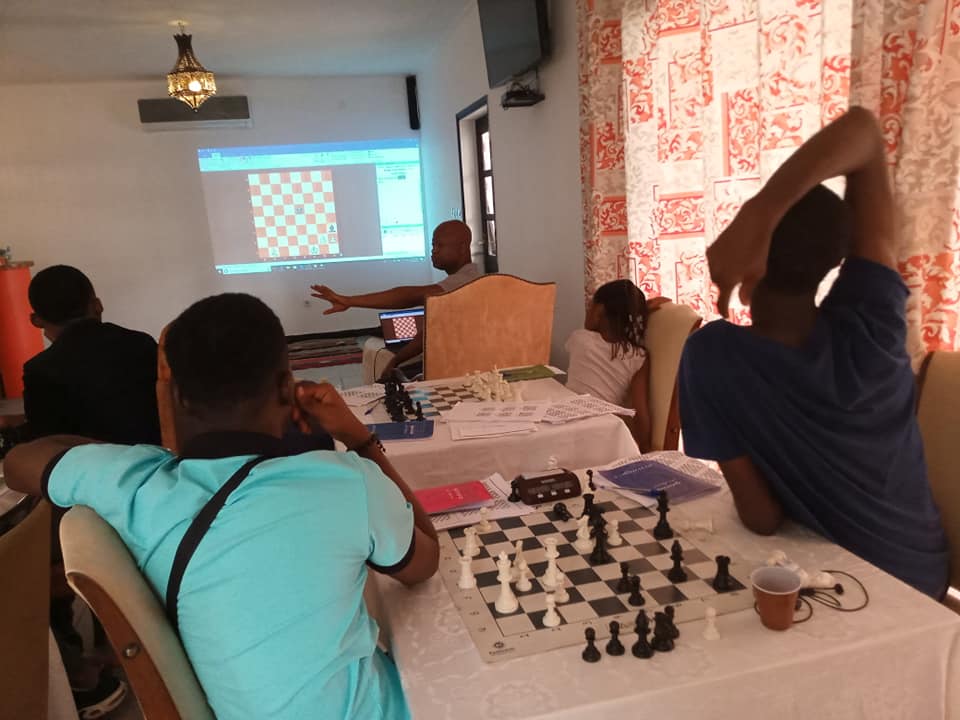 Video by The Chess Drum

Dr. Essoh set the charge for the occasion as “cadets in training” by GM Ashley. This would be a selection of juniors who would be trained as the next generation of top players in the West African nation. This is to be the beginning of a long-standing project to raise the level of play in the Ivory Coast and the continent in general. Ashley had been the national coach of the Ivorian team in 2016 for the Chess Olympiad in Baku, Azerbaijan. Dr. Essoh was away on work assignment, but left the organization in capable hands. 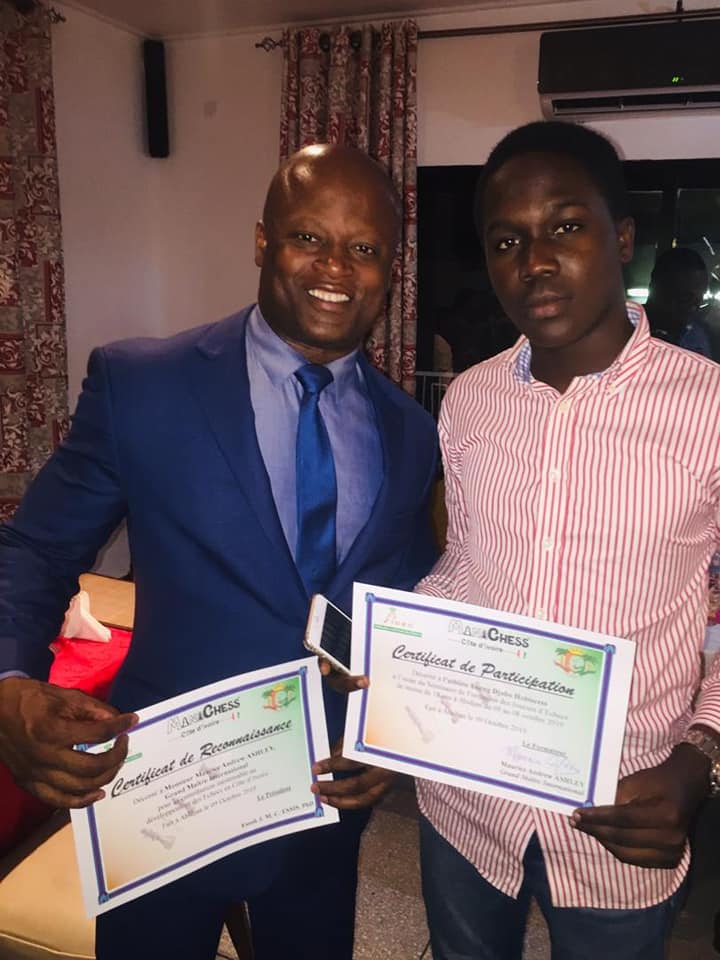 After a week of training in Abidjan, Ashley heading to Accra, Ghana. He was delighted to be back in the “Land of the Gold” after being in the “Coast of Ivory.” These are two countries we love because they are major producers of cacao (cocoa), the main ingredient in chocolate! Ashley also had with him a special guest to accompany him… Rochelle Ballantyne of the “Brooklyn Castle” fame.

“I am extremely grateful that Rochelle Ballantyne – a former student, Expert chess player, Stanford graduate, now at Columbia getting her Master’s in Education Policy – agreed to take a break from her intense university schedule to join me for a few days in inspiring the youth (and adults) of Ghana. The African-American Association of Ghana opened its doors to welcome us at the wonderful W.E.B. Du Bois Memorial Center. What a welcome! Rochelle dropped some bombs on the best players in the country to show how a powerful intelligent Sista gets down. 🙂 Now it’s time to go change lives! #accra #ghana #africa #grateful #inspiration” 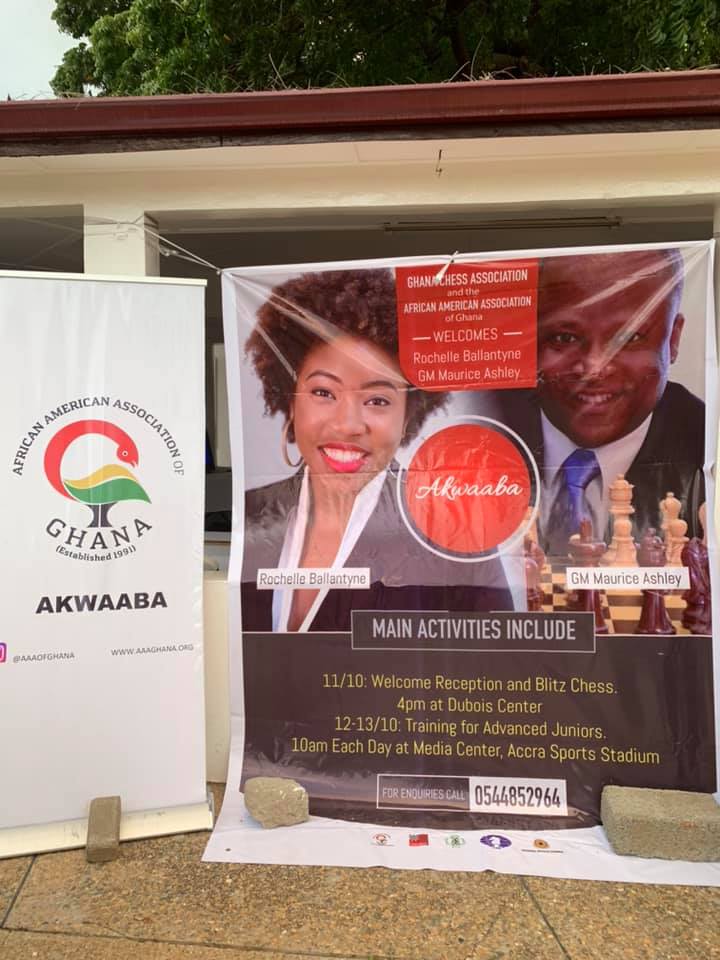 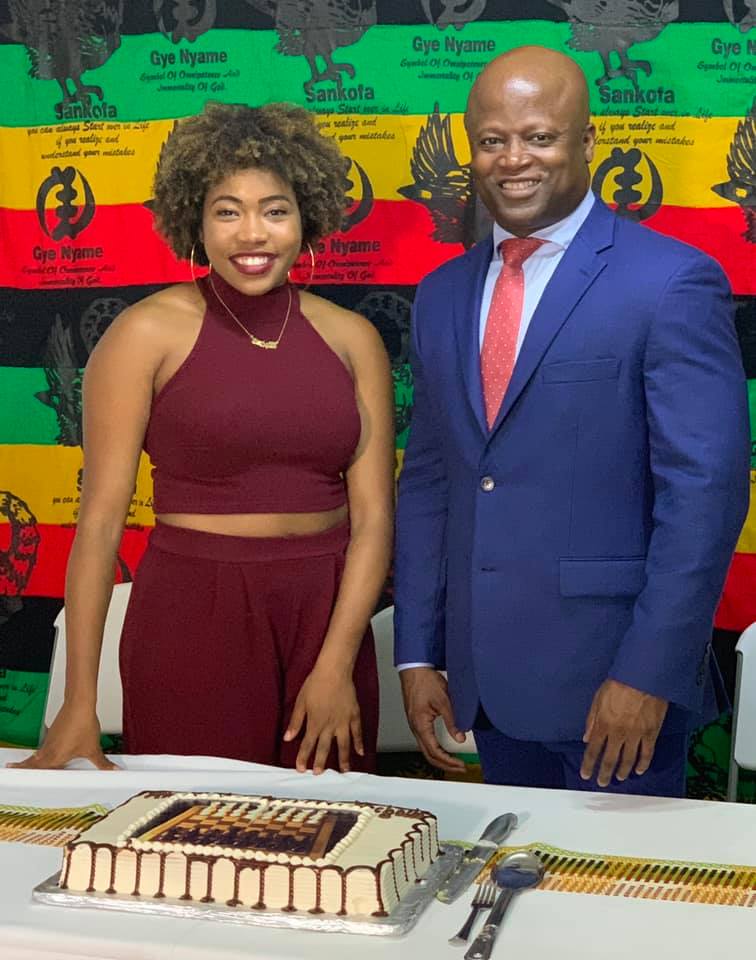 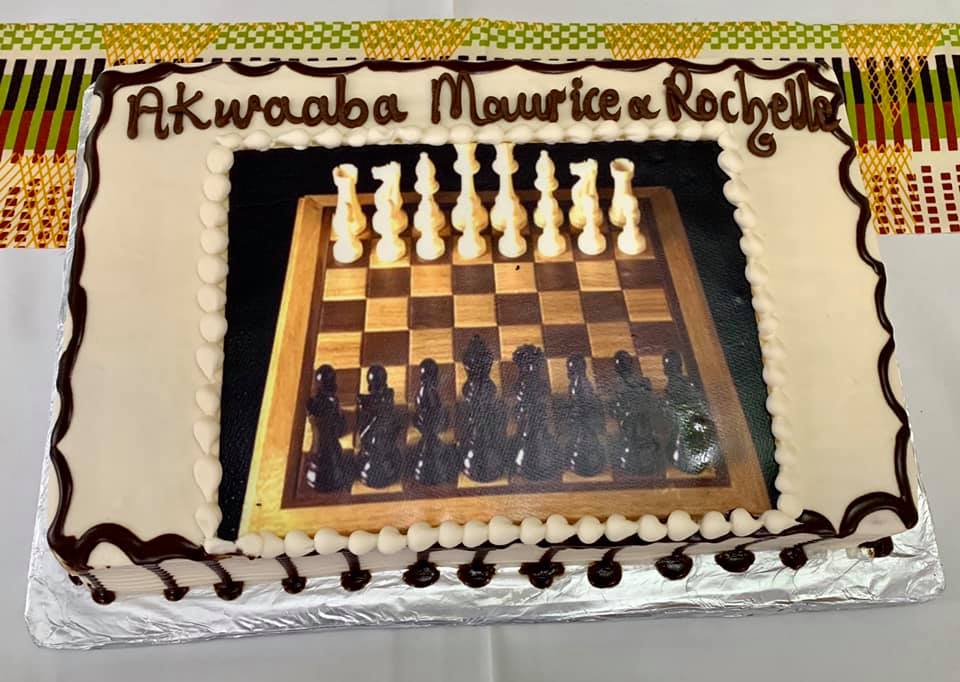 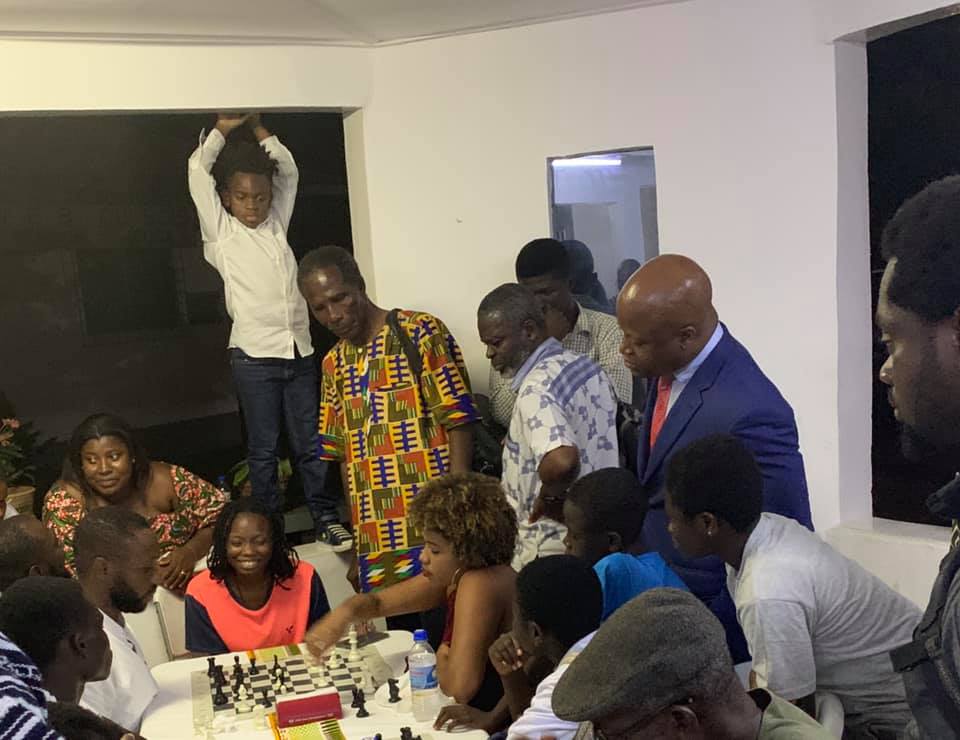 Ballantyne, who is a graduate of Stanford University in 2017, and current Columbia student, was making her first trip to Africa. The occasion has greater significance because of the 400-year commemoration of the arrival of slaves in Jamestown, Virginia in 1619.

These were actually not the first slaves to arrive in the U.S., but the first in the colonies. Slaves had arrived in the 1500s in Florida. Nevertheless, it is an important time to visit Ghana and the iconic slave castles in Cape Coast and Elmina. It will certainly be an emotional trip.

Both Ashley and Ballantyne will provide training sessions for the juniors at the Accra Sports Stadium. Both will most certainly be treated to a royal tour of the land where many Blacks from the Western Hemisphere had originated. It is considered a return for many Black and the “Sankofa” symbol is often used to indicate a need to reflect on the past in order to build a successful future. 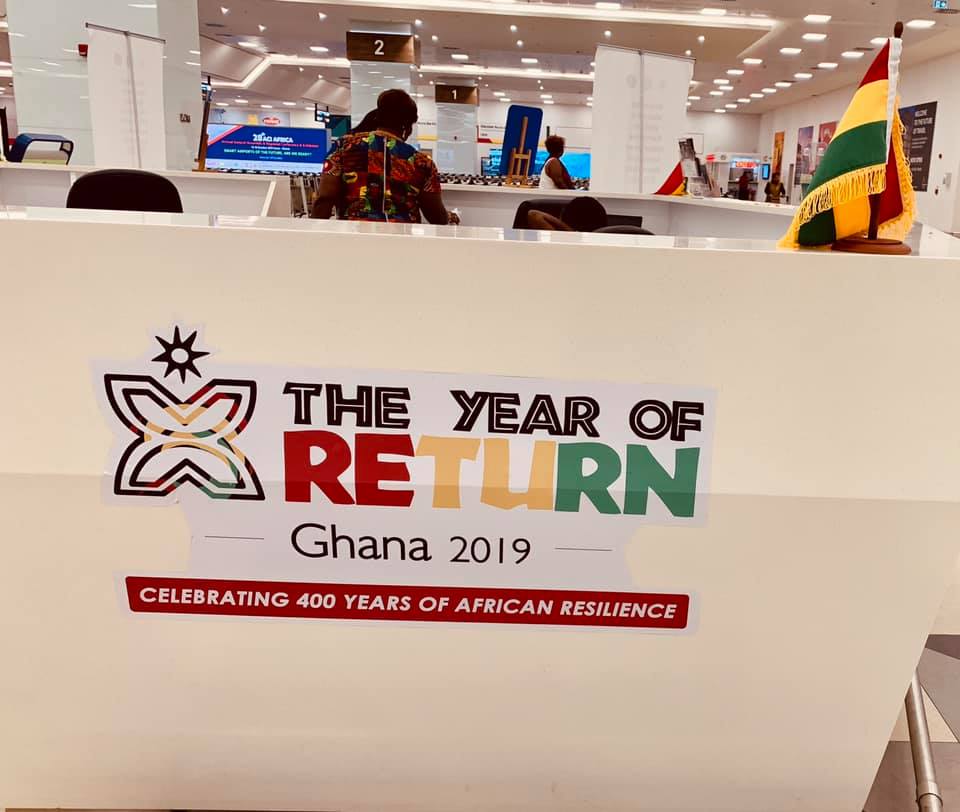 The African-American Association of Ghana welcomed the two guests at the W.E.B. Du Bois Memorial Centre for Pan African Culture, a popular tourist destination. Ghana’s founding President Dr. Kwame Nkrumah led Ghana to independence in 1957 and afterwards invited African-Americans to migrate to Ghana to help build the new nation. Some have been there ever since and represent a very sizable community along with many migrants from the Caribbean.

Historian, scholar and activist W.E.B. DuBois migrated to Ghana in 1961 after becoming disenchanted with the social progress of Blacks in America. He was also maligned by the U.S. government for professing the virtues of communism. DuBois was a professor at the iconic Black graduate school Atlanta University and the author of the classic book, The Souls of Black Folk. Ironically, DuBois was at odds with Jamaica-born Pan-Africanist Marcus Garvey. DuBois eventually adopted Pan-Africanist views and died in Ghana at the age of 95. His remains rest on the grounds of the museum. 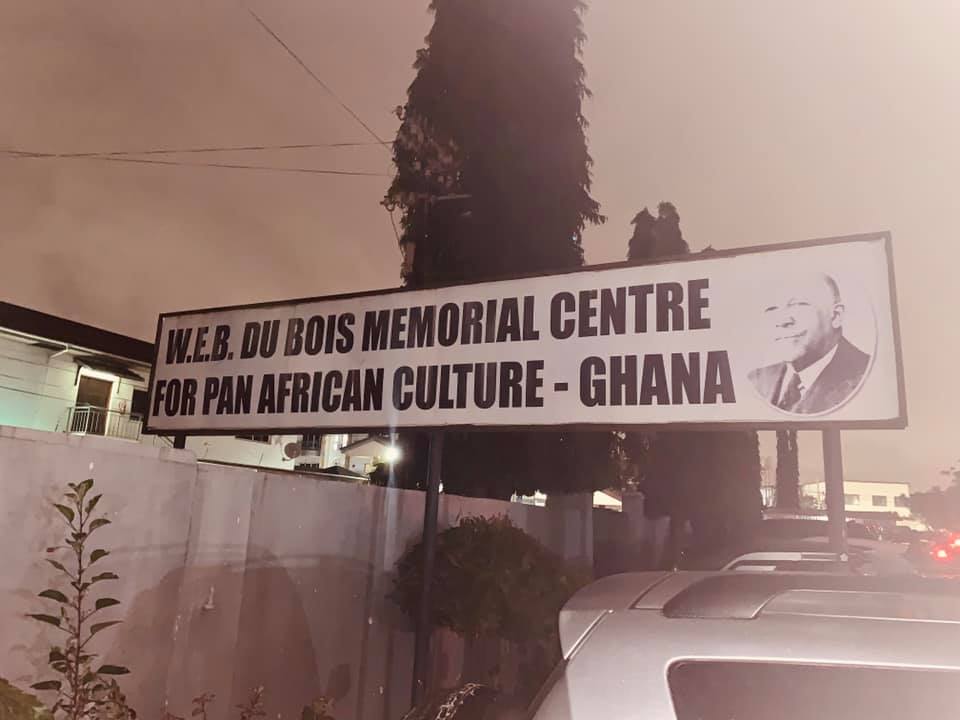 This trip is symbolic on so many levels. Another daughter has returned home and the world’s first African-American Grandmaster is personifying the spirit of Sankofa. In fact, Ashley has arranged with ChessBase to provide both nations with with software to help in their chess development.

After such a successful year of African chess (African Championships, Grand Chess Tour, All-Africa Games), the continent has reached a watershed moment. Will 2019 represent the change in momentum for African chess? Will the new FIDE administration provide a plan to propel African players forward? Will African players begin to assert themselves and become the next region to blossom?

Dr. Nkrumah asserted at the 1958 All-Africa Peoples Conference in Accra, Ghana that 20th century would be Africa’s. We see the “Asia Boom” in chess. Will the 21st century be Africa’s in chess? The success of 2019 and the visits by Ashley will certainly give the continent hope and promise.