Going into the popular blitz segment, everyone knew the Egyptians would be tough to beat. However, Africa has many strong blitzers throughout the continent and the Internet has made it more popular than ever. Who would be able to unseat the Kings and Queens of African chess? Would it be the Algerians? Zambians? Nigerians? Moroccans? Perhaps there would be a legend created from an less-fancied chess nation. Questions abound. Well.. Bassem Amin would have all the answers.

To be honest, Amin has proven himself to be in a class by himself having once eclipsed the 2700 mark. In blitz, while speed of moves is important, chess knowledge is paramount. It is so much easier to get into a good flow when one knows exactly what to do. Amin’s 9/9 mark was only blemished by the fact that he couldn’t try for a Bobby Fischer 11/11. He would have to settle for a Robert Gwaze 9/9. Authorities shortened the event the previous day from eleven rounds to nine rounds.

Of course, Ahmed Adly would be a prime contender to win the “triple crown” and has competed in World Blitz Championships with the best in the world. In this tournament, Adly was slowed by Nigeria’s Oladapo Adu losing badly in round three. This would force him to take chances in order to get onto the medal stand. He would be nicked for a draw in the very next round by Morocco’s Mohamed Tisser. Adly would go on to win five in a row including wins over Hicham Hamdouchi and Bilel Bellahcene. Impressive comeback. 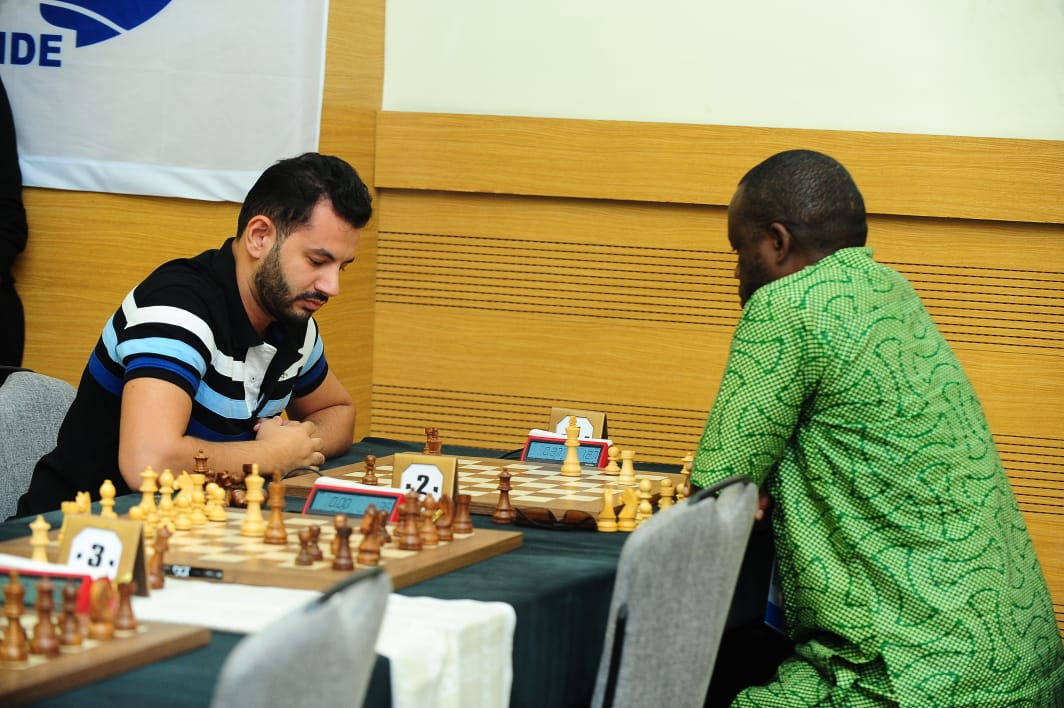 Tournament of Streaks: Ahmed Adly battling Oladapo Adu. Adly would lose this game, but later win five in a row to clinch the silver. Adu was 3/3, but lost his next three games falling off the medal pace. Photo by Mohamed Bounaji

Babatunde Ogunsiku of Africa Chess Media asked about the shortening of the blitz tournament. His rational being that it would be useful to give contenders an optimal change at getting the last medal. It just so happened that in the final standings seven players were on 6/9! Nevertheless, Bilel Bellahcene’s last two wins over Rodwell Makoto and Harold Wanyama got him on the podium with 6.5/9. The other contenders were busy beating each other (and losing to Amin). Another two rounds would have made for a tense conclusion.

Blitz games are difficult to assess and analyze because of the nature of the games, but of course the strongest players tend to show their experience. The top four players were all Grandmasters. It appears like the future of competitive chess has a bright future in Africa.

Three events… three gold medals. Shrook Wafa is the only chess player at the All-African Games who can make that claim. She did so in style dropping only three games out of 27 (+22-3=2). Two of those were to Lina Nassr of Algeria, who won a silver (mixed team) and bronze (blitz). Her sister Shahenda Wafa also bagged two medals scoring an impressive 8.5/9 in the team event and silver in the blitz. 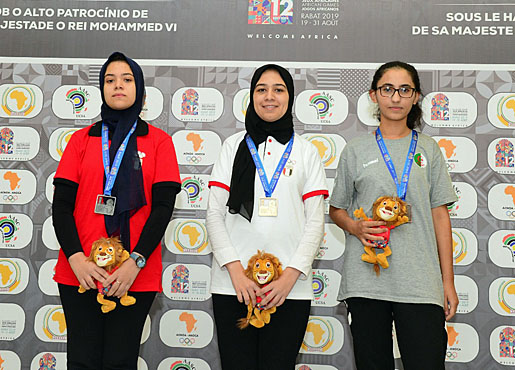 It appears that the balance of power is still firmly in the north, but there are a few cracks in the foundation of North African dominance. While Egypt and Algeria are still the class of the continent, players from countries such as Zambia, Nigeria, Angola, Botswana and Zimbabwe scored a number of rousing upsets including Linda Shaba’s impressive win over Shahenda Wafa to end the tournament. 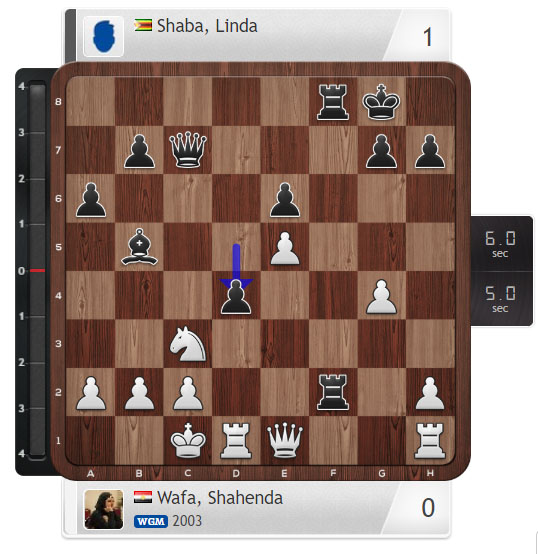 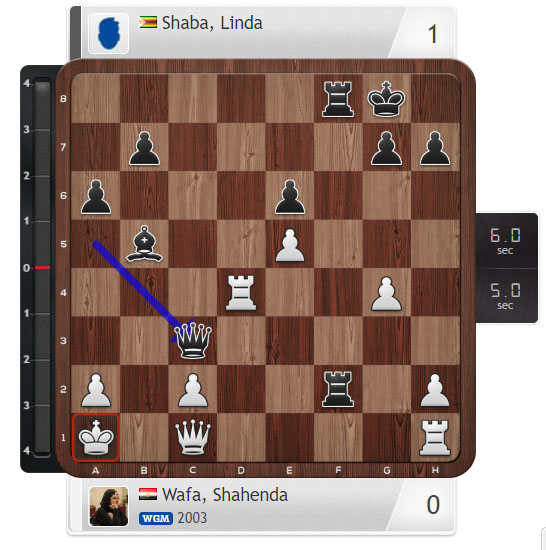 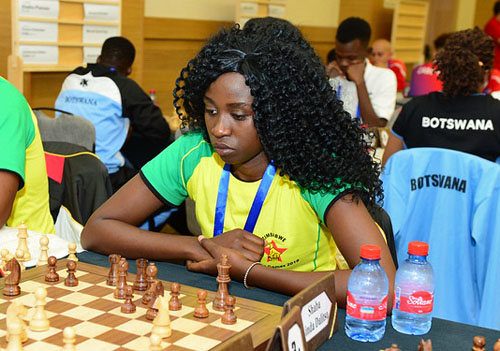 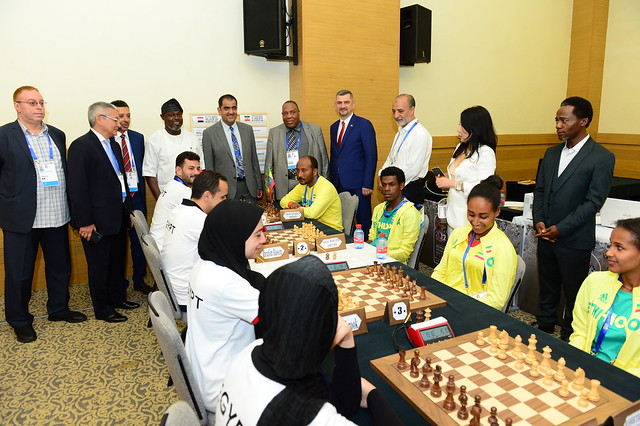 In the end, it was an outstanding event with good conditions and the camaraderie seemed to be everpresent. The photography by Mohamed Bounaji helped convey the spirit of the event. With the attention of FIDE, perhaps there will be an initiative to support African chess development. The typical “Chess in Schools” that Kirsan Ilyumzhinov promised every election campaign is necessary, but not sufficient for cultivating the talent for elite level.

Thirteen years ago, article appeared on these pages titled, “Can Pan-Africanism Work in Chess?“ There were some suggestions about regional collaboration and using Africa’s genuine appeal for Grandmasters to play in top-level tournaments. After a successful Grand Chess Tour tournament in Abidjan, Cote d’Ivoire, there is proof that it can be done. Are we ready to make this the African Century? 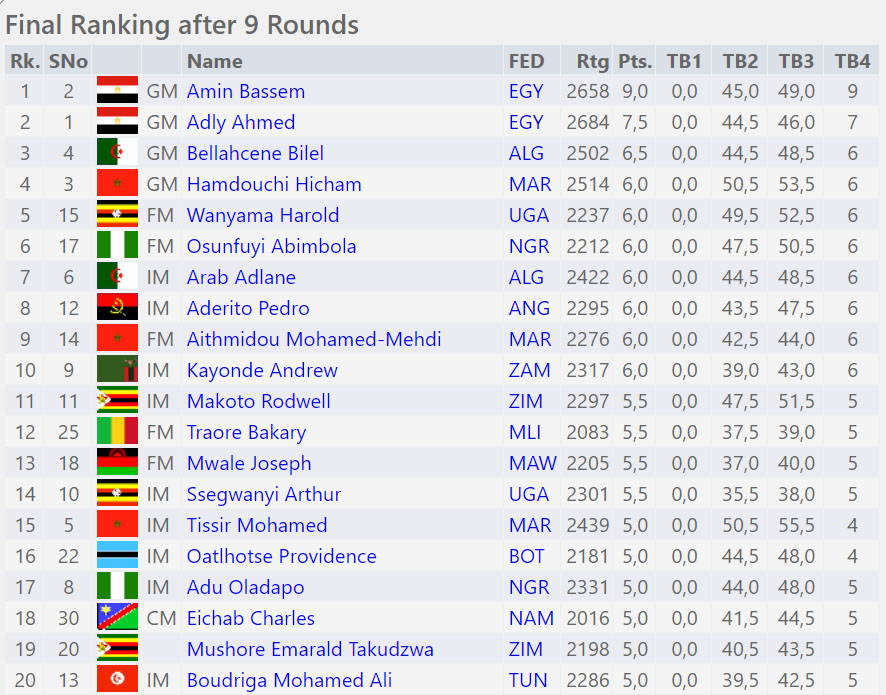 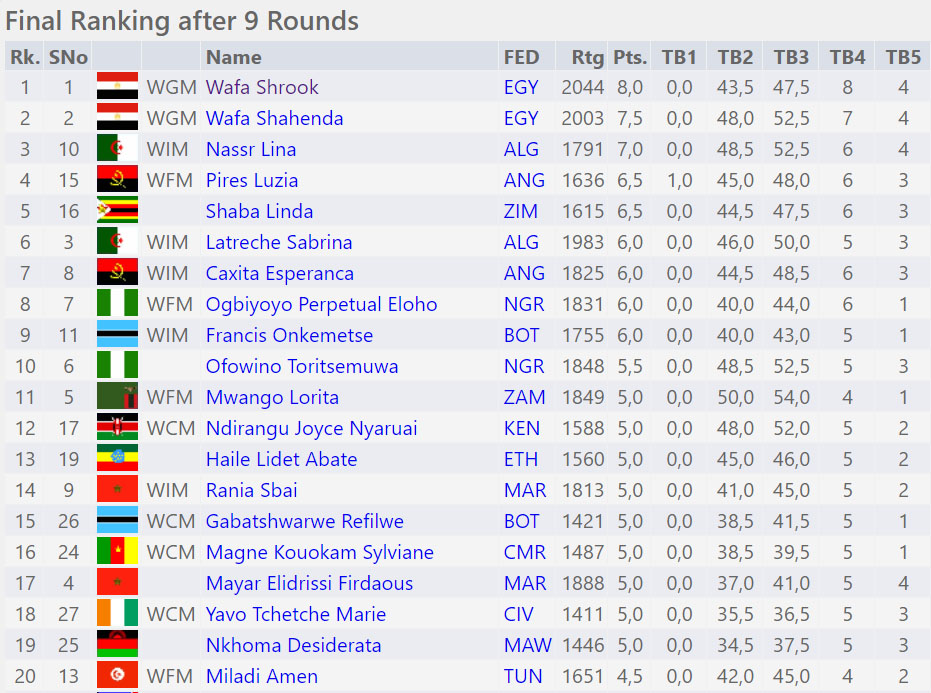