Charles Troutman III had been one of the top 100 players in age categories between 9-11 years old. After a lull in his tournament play during 2017, he began playing more online activity and his classical chess began to improve. He’s on the verge of eclipsing the 2000 rating barrier.

He is the son of a tournament chess player (Charles Jr.) and lives in the Atlanta area. Now 15, Charles is one of the top 20 juniors in the state with a rating of 1992 and traveled to Wheeling to compete in the 2019 Chicago Open (under-2300 section). He ended on 3/7 with two wins over 2100-rated players. In fact, he had interesting encounter with Chicago’s Daniel X Jones, promoter of the National Blitz League (NBL). Playing white, he alertly won a pawn on the queenside, but the game took many twists and turns. Jones beat back a blistering attack and won the battle. 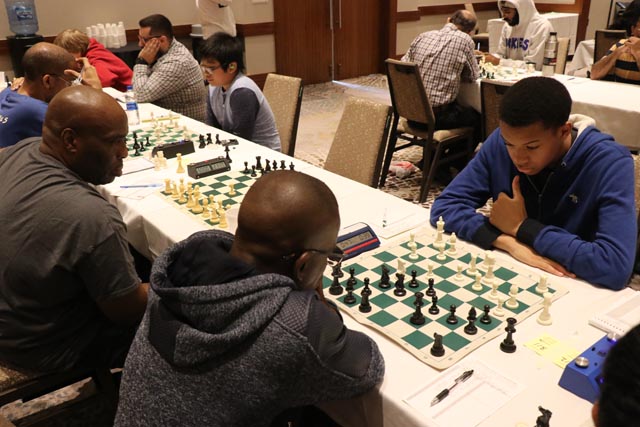 Charles Troutman (right) playing Daniel X Jones in the first round of the Chicago Open, under-2300 section. National Master Marvin Dandridge looks on while waiting for his opponent. Photo by Daaim Shabazz.

Charles lost that battle, but played in the blitz tournament on Sunday night and got 4.5/10 in the Open section. It’s puzzling because the cross table indicates that he drew his games against his first opponent when he clearly won the following game with 00:03 left on the clock. Was it a friendly?

This game against National Master Luke Calhoun of Arizona was out of a Blackmar-Diemar Gambit, an opening often used for shock value. This particular game saw black decline the gambit only to win a pawn later. Despite being a pawn down, white had more space and in order to free his position, black had to return the pawn. The game evolved into a very interesting pawn ending.