Tallahassee’s BBCC hosted the 1st Capital City Open on a beautiful spring weekend. The tournament was the first open tournament in Florida’s capital since 2014 Froemke Memorial. More than 50 players came from Tampa, Jacksonville and Gainesville. 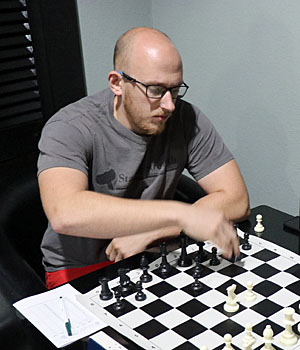 NM Todd Bryant trotting out the Dragon against Steve Lenhert.

As it happened the open section saw the top contenders taking points from each other. There were no upsets in the first round as all the rating favorites won. In the second round, Bryant (2216) and Steve Lenhert (2087) drew in a tactical slugfest in a Sicilian Dragon. Lenhert told The Chess Drum that both were under a minute in the end and he couldn’t find a win, so they game ended in a three-fold repetition. Meanwhile Daaim Shabazz (2007) beat young upstart Erick Zhao (2113) with a prickly hedgehog.

While Benjamin Chen (2087) was held to a draw in the second round by David Liu (1677) of Gainesville, he beat the elder Liu brother, Jackie (1944). William Wu (1788) upset Erick Zhao (2113). Two professors battled it out as Florida State’s Lenhert defeated FAMU’s Shabazz in a very complicated game in the English. The game featured a pawn sacrifice resulting in tactical fireworks. The game was imbalanced and was the last to finish. Shabazz finally falling to time pressure mistakes.

Going into penultimate round, Lenhert, Bryant and Chen were at 2.5/3, so the pairings were Lenhert-Chen and Shabazz-Bryant. Chen, who has been teetering around 2100, went into his game with Lenhert with aggressive intent. The game went into a theoretical Najdorf variation. Lenhert told The Chess Drum that he played the same line against Chen in a blitz game, but forgot the analysis. Chen two bishops and active play was able to win the day. “I was happy I survived as long as I did,” said Lenhert.

Jackie Liu and brother David Liu of Gainesville have been regular participants of Tallahassee tournaments. There are now two more Liu brothers!

Chen quickly drew with Shabazz clinching a tie for first with 4/5. Shen ended up defeating Liu and also finished with 4 points. There was a three-way tie for 3rd-5th with Bryant, Lenhert and Shabazz finishing on 3.5/5. The Liu brothers scored 50% with 2.5/5 and five players ended with 2/5. It was a very balanced field as the lower half of the field essentially beat each other.

In the under-1800 section, top-seed Jake McIntosh blitzed the field with 5-0. Dylan Yu and James Zhang tied for 2nd with 3/5. Zhang’s only loss was to Yu. In the under-1400 section, Jolie Huang took top honors as she went undefeated with 4.5/5 and only gave up a draw to 3rd place finished Christopher Taylor (3.5/5).

Paul Reynolds failed to catch Jolie Huang, but had a good showing.
Photos by Daaim Shabazz

Paul Reynolds took clear second with 4/5 losing to Huang, but beating all other opponents. A podiatrist by training, Reynolds told The Chess Drum that he feels better about his work schedule because it allows more focus on chess. The results were apparent. In the under-400, Liang Zhou took clear first in his first tournament with a perfect score of 5/5! Keep an eye out on him!