On March 16th, the New York Times ran a story on Tanitoluwa Adewumi, a Nigerian boy whose family migrated to the U.S. for a better life. The story generated more than 400 comments. A follow-up story generated another 400 comments. “Homeless,” “refugee,” and “chess champion” are an unlikely combination of search words indeed, but the top result will be a boy affectionately known as “Tani.” 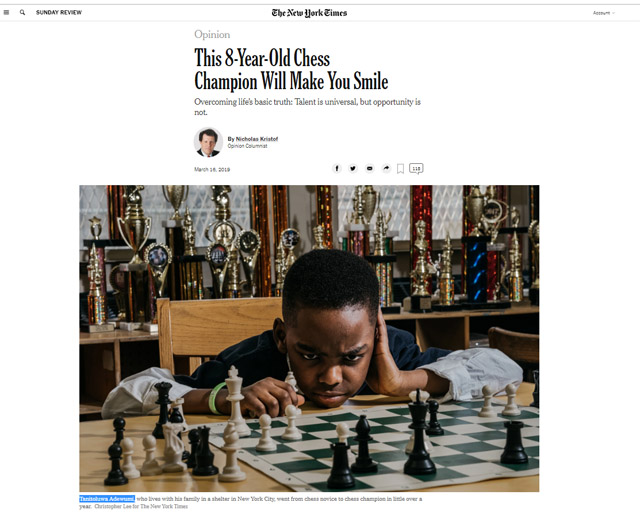 The New York Times that spawned a frantic fundraising campaign.

After Tani won a New York Primary Championship, the story went viral. The 8-year old boy initially learned chess from his older brother Austin Adewumi and then at P.S. 116 a year before winning the tournament. Many children win these awards each year, but what makes the story so compelling was the fact that the family had been living in a homeless shelter for more than a year. Kayode Adewumi, wife Oluwatoyin decided to take their sons to the U.S. for a better life, but could not have imagined what was to follow.

After Tani’s story hit the mass media, a campaign was launched to raise money for the family. To date, the donations have more than quintupled the original $50,000 target. This has been a wonderful gesture from the public minus some negative comments and a good number of “cling-ons” looking to divert attention to their own campaigns. There was enough intrigue that former President Bill Clinton wanted the honor of meeting Tani and invited him to his office in Harlem. 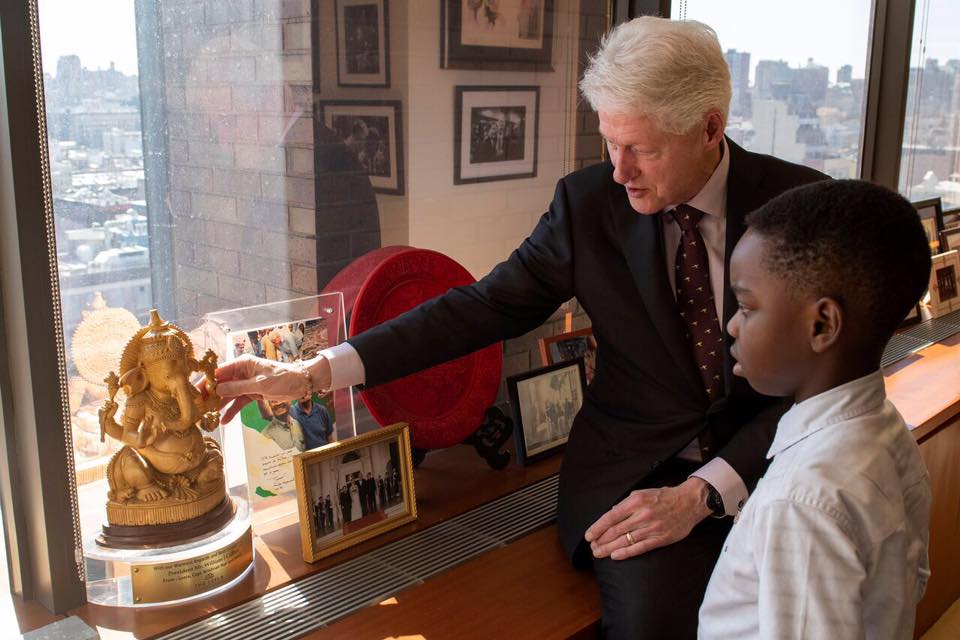 42nd U.S. President Bill Clinton is showing Tani a depiction of Ganesha, the Hindu God who is a symbol of good fortune, but also the remover of obstacles. Photo by Nicholas Kristof.

Besides the generous outpouring toward the GoFundMe campaign, the family received many offers from well-wishers and are now living in a small apartment.

The family settled on one of the more modest and practical housing offers: An anonymous donor paid a year’s rent on a two-bedroom apartment near Tani’s current school. The apartment is clean, comfortable and freshly painted, without being luxurious, and the Adewumis gaze adoringly at their new kitchen.

The story evoked notions of “American Dream,” “Immigrants Making American Great,” and other narratives that took a swipe at the immigration policies being bounced around by the current Trump administration.

A week after the initial article, a second article stated that the family planned to give 10% of their fund to their church and set up a foundation to assist embattled immigrants. This gesture may take many by surprise considering that the money was donated with the idea of helping the family chart an economical path to help Tani realize his dreams.

“I’m a hardworking guy.”
~Kayode Adewumi on why he is donating the entire fund

If Tani is to rise in the competitive world of scholastic chess, the family will need a plan. Eventually, many well-wishers will offer the Adewumi family advice on Tani’s development in chess, but they will have to discern the best path. For the immigrant family, some of it will entail adjusting to the unique social dynamics of American society. 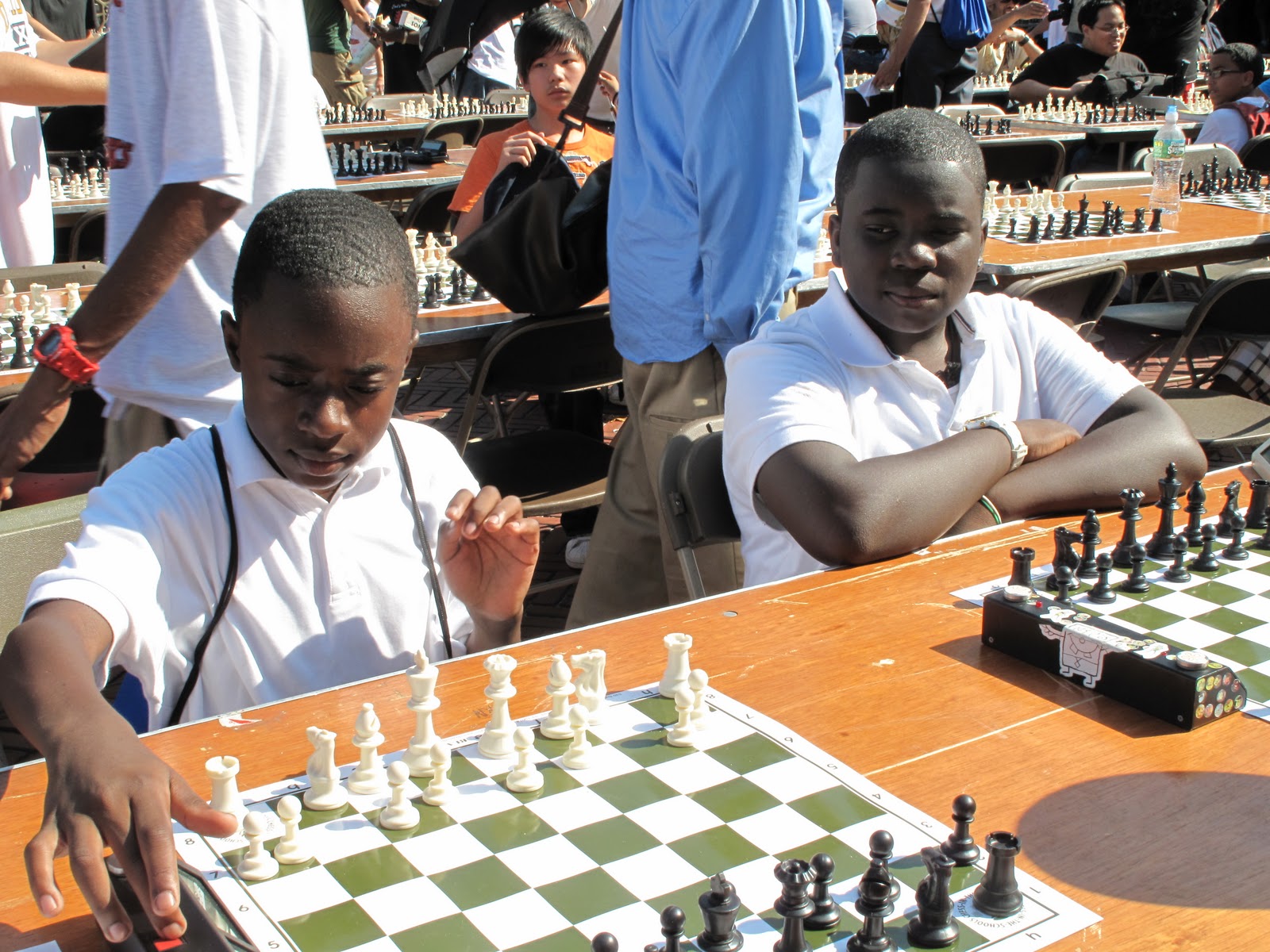 Josh Colas and Justus Williams are recent Black talents out of NYC, but there is no shortage of examples in the city’s chess history. Both are now juniors at Webster University. Photo by Elizabeth Vicary.

Another reality is that New York can be a challenging place to live up to potential in chess. Media attention comes at a price, and the expectations will be tremendous. Tani has stated that he wants to become the world’s youngest Grandmaster, a goal uttered by many young players worldwide (past and present). There is no tailor-made plan for success in chess, but what will be an essential factor is Tani’s social well-being. There are quite a number of positive influences in New York to help him realize his talents. 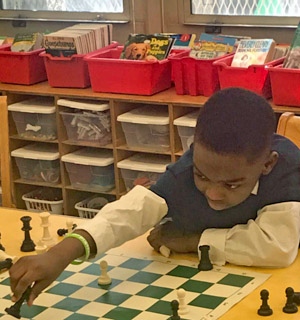 Media has heaped effusive praise labeling him a “genius,” “prodigy,” “Magnus Carlsen’s challenger” and other superlatives. This type of hyperbole is bound to increase the amount of pressure especially if a young player is competing against equally ambitious children. With all the media attention, chess players will begin to track every tournament result and every available game. Agadmator, a popular YouTube channel, featured one of his games. The quest of chess mastery is a coveted goal, but improvement is not always a linear progression. There will be some disappointing results, but he will have widespread support in the New York chess community.

“This school showed confidence in Tanitoluwa.
So we return the confidence.”
~Oluwatoyin Adewumi to P.S. 116 principal, Jane Hsu

Abhimanyu Mishra of New Jersey made National Master at age 9 years, 2 months and 17 days. Nevertheless, Tani does not have to chase records as some are encouraging him to do. There is a danger. Josh Waitzkin of the Searching for Bobby Fischer fame wrote in The Art of Learning about the tremendous pressure he faced while trying to live up to the hype generated by the movie. He ultimately gave up his plight to become a Grandmaster and embarked on a successful competitive career in the martial art of Tai Chi. In fact, he became a World Champion.

Hopefully, Tani will continue to enjoy chess and get all the benefits of social development that it has to offer. A recent post here at The Chess Drum showed how chess could lead to success in various aspects of life. Several promising players in the Black community have excelled in chess and subsequently in professional life.

There have been many recent success stories in New York, but the paths have varied. Whether or not Tani becomes the youngest Grandmaster in history, he stands to be a success in life. Becoming a Grandmaster would be fantastic, but becoming an engineer, physician, lawyer, banker, or professor are not bad alternatives!

Magnus Carlsen in Africa, May 8th-12th!