No one knows why Fabiano Caruana didn’t see 68…Bh4!! with mate in 36 moves. It may be because he’s not a computer. That was what was needed to come to the conclusion that Caruana had an opportunity to break ahead in this close match. In fact, several strong Grandmasters had no clue such an idea existed and even with computers, failed to explain the idea. What a round this was, but the match remains even.

Perhaps the narrative is that “black is good” because the second player has had all of the chances in this match. Caruana will get another chance after the rest day to try to win with black. There has been a general agreement of an advantage of white’s first move. However, it is becoming apparent that as more analysis is put into finding resources with black, we can no longer be so simplistic as to associate white’s 55% win rate with the first move.

There is an obvious psychological advantage of having white such that players go in believing that have to win. In addition, the entire chess education has conditioned players to believe that white should win. From the way the diagrams are positioned in chess literature (usually from white’s perspective) and other examples including puzzle books with every example being “White to Play”. So perhaps we are seeing a change in this notion… if we truly believe chess to be an equal battle.

This game is hard to call. The Petroff (1.e4 e5 2.Nf3 Nf6 3.Nxe5 d6 4.Nd3!?) featured a “Knight’s Tango” as both Carlsen and Caruana danced their knights around for 20 moves (White 10 times and Black 9 times). The rules we learned in chess warned us against moving the same piece in the opening. This adage was all but destroyed. A wise person once said “beginners learn to obey the rules and master learn to break the rules.” When asked to explain this comical display, Carlsen said, “It’s very funny looking but unfortunately it leads to a very dull position.” Not exactly. 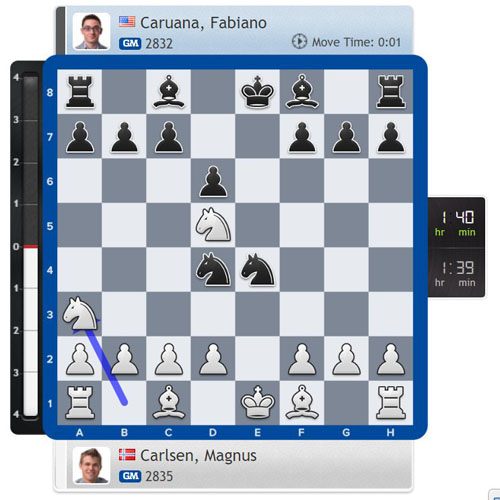 Amusing “Knights’ Tango” in Game Six!
After 10.Na3, all the opening books have to be rewritten.

As the game wore on, Carlsen decided to give up a piece to liquidate several pawns. Caruana got one pawn back… the dangerous a-pawn. As Carlsen raced over to the kindside to set up a fortress, it was clear that Caruana was pressing. Carlsen once said he didn’t believe in fortresses, but it would be his saving grace. Many of the commentating teams were perplexed and could not explain the ending… and NONE of them saw the winning idea. A former world champion Garry Kasparov weighed in…

The computer shows Black wins with 68..Bh4 here. But had Caruana played the incredible 69.Bd5 Ne2 70.Bf3 Ng1!! they would request metal detectors immediately! No human can willingly trap his own knight like that. pic.twitter.com/ypBjXv3QCA

Actually, if Caruana had spotted the 68…Bh4!! it would have been a dagger for sure and Carlsen would have been reeling. He’ll have a rest day to figure out what to do with his second white in a row. As stated earlier, it may be that the ship has sailed for the so-called advantage of the white move. With computers, so much ground has been made in chess theory.

Revived openings, unique middlegame ideas (i.e., Alpha Zero) and complex multi-piece endings show that with the right tools, we see that chess is still rich with possibilities. It is ironic that some have suggested that the championship match should be done in 960. Interesting thought.