The World Chess Championship will begin tomorrow in Holburn, London featuring World Champion Magnus Carlsen and challenger Fabiano Caruana, the #1 and #2 players in the world, respectively. While Carlsen is the favorite and has been the champion for five years, many pundits have given Caruana a fighting chance to win the crown. Many have anticipated this match up for years and below a prescient image is proof of that. 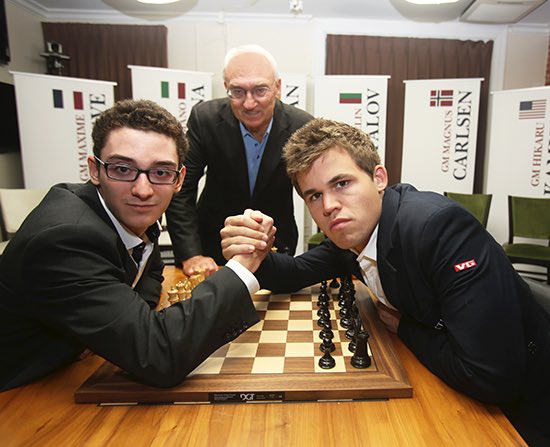 While this match will not have any of the political overtones of the 1972 match, there are a number of parallels. Caruana grew up in the same Brooklyn neighborhood that Fischer grew up in and proceeded to break most of his records. He was a child prodigy raised by both parents and was taken abroad in order to broaden his opportunities. He made tremendous progress with the help of trainers and made his break into the upper echelon. He returned after a 10-year sojourn in Europe, rose to glory and like Fischer, will face a well-equipped champion for the world title.

Carlsen has help the championship for five years and the has been the top-rated player since 2011. He has defended his title successful twice after winning the crown from Viswanathan Anand in 2014. An image of a triumphant Carlsen was taken after his was dunked in the swimming pool. 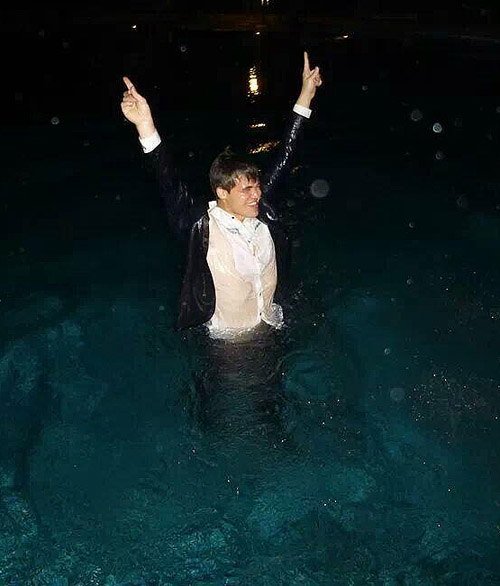 Norway has benefited from the “Carlsen Effect” as chess has quickly become a fixation of Norwegians. We have all enjoyed watching the “Boy Wonder” story of Carlsen unfold, but one wonders if we have ended one era and started another. The idea that such a diverse set of players dot the upper echelons of chess is refreshing. Who ever thought a Norwegian would be at the top of chess for seven years? Not to mention other rising talents out of China, India, Iran and Uzbekistan as of late. Regardless the result of this match, there is a sense that the field is more level than it has been in recent years and there is a new cadre of talent looking to make a move to the top.

I have written a number of articles on Caruana’s evolution… his rise and as a contender. When we assess talent in fact his homeschooling allowed him the freedom to explore and express his talents. For those aspiring to become a chess champion, what type of future does such chess excellence offer? Certainly one can attempt to become world champion, but that may not be practical in most cases. The economics of being a prodigy is hard to calculate. If Caruana does win the match, is there something tangible his result can offer?

IM Danny Rensch wrote an article in the latest issue of American Chess Magazine and had an interesting perspective about the effect of the match:

“November may come and go with no tangible change for chess in the U.S. Our chess coaches will still know that, most likely, their students will start choosing other sports in junior high, like they always have. Tournament organizers will know they can’t compete head-to-head with soccer, basketball or other sports on the weekend and expect to get all their kids there. we’ll all know that as much as chess parents appreciate what chess has done for their kids, there is no viable “path to chess pro,” and when it’s time to focus on grades, they’ll encourage (or force their kids to leave their chess passion behind.”

Is Rensch showing pessimism about the effect of another American champion, or is he merely recounting the way things have traditionally gone in the past? Of course before Fischer won, chess was also a fringe activity, but after 1972, there was an awareness and name recognition that continues to this day. Since Fischer, there have been great players, but perhaps what is missing is the magical formula to move chess to the forefront… abolishing of draws, shorter time controls, live broadcasting, confession booths, and even millionaire-dollar prize funds.

The “Cool Factor” of Chess

Apart from all of these methods to make chess more attractive, many young chess players seem to be more interested in using chess as a social outlet. Many parents also believe such a background of chess helps to build their profiles for college applications. Chess has retained its cachet, and even has a “cool factor” since many celebrities have shown their love for the game. When Carlsen was asked today if he thought they were making chess “cool,” he had an thought-provoking answer.

Magnus Carlsen starts off his press conference for #CarlsenCaruana with the coolest possible answer. https://t.co/UKq7vwV5td pic.twitter.com/H90f2A4l3R

Bobby Fischer certainly made chess cool in the 70s and helped U.S. membership nearly doubled (from 30,084 to 59,250) in a year. The former chess prodigy grew into a dashing figure at 6’1″ who preferred tailored suits. While he set a fashion trend in a sea of bad-dressing chess players, he was often a bit a bit of a provocateur. This combination earned him quite a media persona and was still a household name decades after retiring… even today.

Carlsen became a public figure with his modeling contracts, TV commercials and matching wits with icons like Bill Gates. On the other hand, Caruana is rather low-key and diminutive in stature. However, he has the type of charm that has endeared him to fans. Are these characteristics edgy enough for New York’s Madison Avenue?

The time is here. In a few hours, the first game will begin. The chess world will be watching the most-anticipated match since the Fischer-Spassky and Kasparov-Karpov battles. It dawns on the new era of 20-something, homeschooled, computer natives. If Carlsen wins, is there anything that changes. If Caruana wins, can he translate his championship status into increased visibility and sponsorship for chess? That question would most likely be answered in St. Louis and not New York. Time will tell.