I found a very touching story that ran last year in On Cuba magazine featuring Oleiny Linares Napoles, silver medalist in the 2008 Chess Olympiad in Dresden, Germany. She has been featured on The Chess Drum several times and is one of the strongest women of African ancestry. 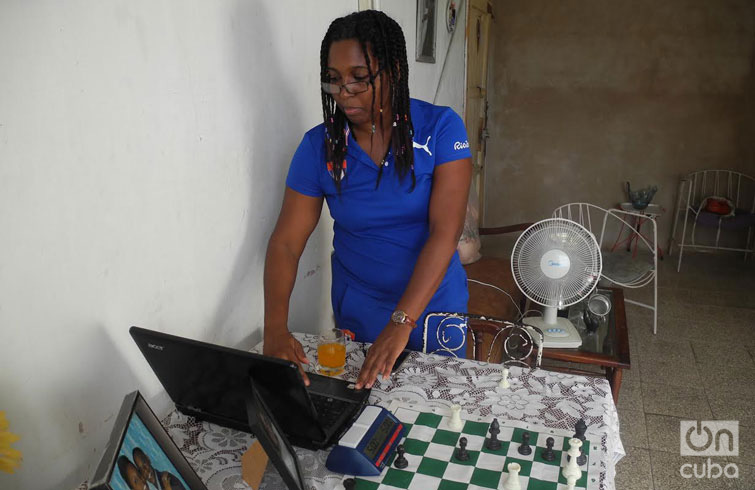 Oleiny Linares Napoles at her home in Santiago de Cuba. It appears that she is reviewing the final Carlsen-Karjakin game from 2016 World Championship match. Photo by Emmanuel Martín

The story is written by Emmanuel Martín in Spanish but one can receive a online translation. The English translation via Google is not perfect, but readable. The story details the beginnings of chess for Martin and Linares under the tutelage of FM Omar Garcia in Colón, Matanzas. It was during this stint that Linares had an encounter with a destitute woman in town, gave her money and reflected that her generosity was from God. 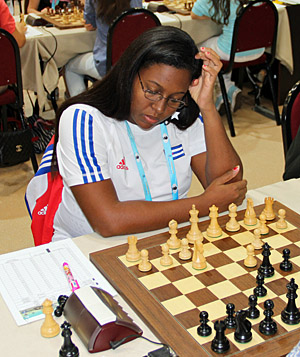 Oleiny Linares at 2012 Chess Olympiad
in Istanbul, Turkey
Photo by Daaim Shabazz.
Martin wrote of her humility coming from such a modest community in Santiago de Cuba where she still lives. The city of 400,000 is accented by the strong Afro-Cuban presence created when Spanish explorers brought Africans to the West Indies in the early 16th century.

Antonio Maceo Grajales is perhaps one of the most important Afro-Cubans from Santiago de Cuba. He was a respected General in the early Cuban independence revolution against Spain and is considered a national hero.

One of the things that make chess players so different is the variety of backgrounds in the different countries. While we sit in the same tournament halls and maybe across from one another, we cannot imagine what the lives of our opponents must be like. Linares comes from humble beginnings and has remained close to her roots. Last year, Martín wrote:

The Olympic runner-up today has to hang her family’s clothes on the street. He lives in the same place since birth, 34 years ago. She has two daughters: Mirtica, 15, and Ruth, 4. She is married under the orders of the Pentecostal Church, but she prefers to call it the Church of Christ. 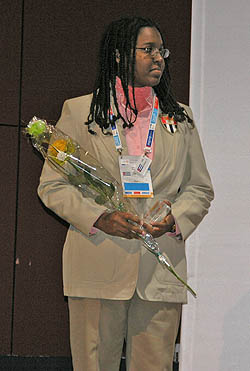 Linares on the podium receiving a silver medal at the 2008 Chess Olympiad in Dresden, Germany. She scored an incredible 9/10. She reached rating ceiling of 2378 in 2012. Photo by Daaim Shabazz.

Of course, this article was written last year, but Oleiny is still active. She competed in the local and regional championships, the Carlos Torre Memorial and Women’s National Championship in January. Unfortunately, she will not be on the Olympiad team this year. She recently scored +1 in the Capablanca Memorial that also featured Peruvian WGM Deysi Cori.

For such a strong player, life has not been a crystal stair. After going off to college in Havana, she got pregnant with her first child and returned to Santiago de Cuba. She got married and years later was carrying her second daughter while competing at the 2012 Olympiad! During a notable career, she continues to find a balance of family and chess. This challenge is part of an ongoing debate. Linares story has been so intriguing that a local film maker produced a short film on her life.

Linares reflected on how the majority of her colleagues remain unmarried while others had children and divorced. On the contrary, Linares has raised her daughters and has had to deflect criticism that her religious beliefs have hindered her chess goals and material wealth. While she remains is a modest dwelling, she stated candidly,

“The money and the house (I have sacrificed) is true; the World Cup that I missed, too. But in life you cannot have everything… you have to know how to make concessions. I would not change having my two daughters for all the money in the world.”

Pursuit of materialism is something eschewed in many religious beliefs and the lessons are not lost on Linares. Martín takes note of her generosity while enjoying the slice of cake she has brought him. “Eternal life is not negotiated with Satan,” she offers. True to her values and passions, she is seen in the above picture going over a game from the Carlsen-Karjakin match with the coup de grâce 50.Qh6+!! It is befitting that such a beautiful game would end with the woman sacrificing her individual gains for a team victory.

There is no information readily available about the short film on Linares’ life, but it would be quite an eye opener! What a fascinating journey!