Round #1: Friday, 9 December 2016
London bridges falling down! Three decisive games in first round. 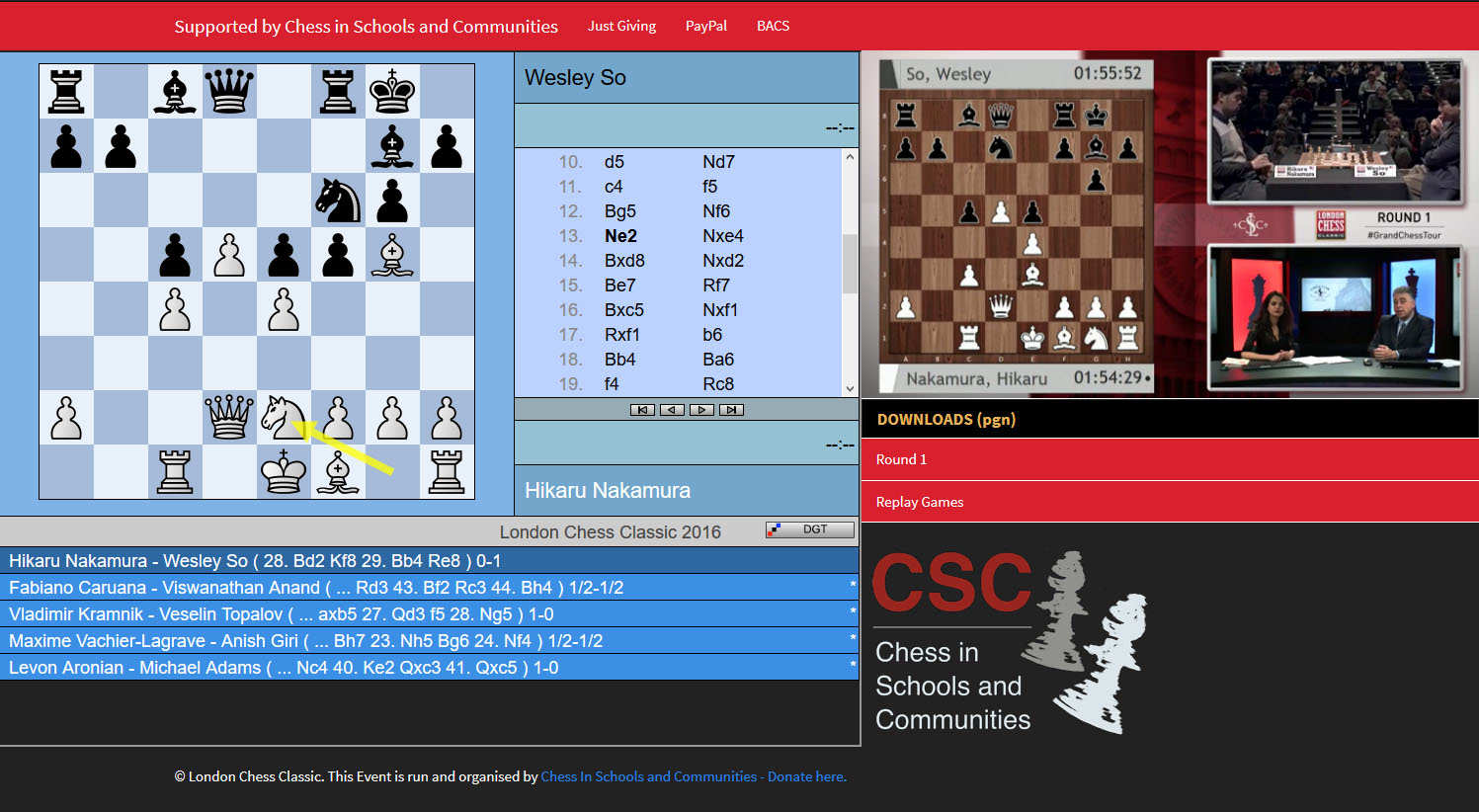 Hikaru Nakamura turned 29 today and wanted to repeat the theme of birthday success of Magnus Carlsen. Unfortunately, he got saddled with a shock losing to teammate Wesley So after forgetting his analysis in a Grunfeld. Nakamura had been seen on social media enjoying his time off and commenting on the World Championship match. Even after a loss he may still be a contender in this long tournament.

Complications favored So after 14.Bxd8 Nxd2 15.Be7 Rf7 (Anand suggested 15…Ne4 16.Bxf8 Bxf8 with blockade on d6.) 1 6.Bxc5 Nxf1 17.Rxf1 b6! The pawn structure is under pressure and the white king is a perilous position. So expertly opened up the position for his Ginsu bishops and wrapped up the point with a the nice 29.Re8! Nakamura painfully resigned, but there are still eight rounds left.

Wesley So has every reason so smile as he defeated his closest rival with the black pieces #LondonChess #LondonChessClassic pic.twitter.com/WqKZa3Si2M

Another matchup was Kramnik-Topalov, two rivalries who still do not shake hands due to the “Toiletgate” scandal from their 2006 match. This game was filled with pre-game drama, but this game was a complete disaster for Topalov. Kramnik uncorked a novelty 9.Nb5! After the game Kramnik mentioned that he was surprised that Topalov went into this dubious line.

On 9…cxb2 10.Bxb2 Bd7 11.Qb3 Bc6 12.Rfd1 Qc8 13.Rac1 with a strong initiative. Kramnik drove the pawn to c7 tying up black’s army. Topalov suggested that instead of 20..e6?? he could play 20…Qb7. In fact, the engines say that the position is approximately equal. After the calamitous 20…e6 black’s position collapsed after 21.Nb5. Kramnik finished with another knight romp with 28.Ng5! Topalov resigned in lieu of 29.Nxe6. The two did not shake hands, but Kramnik was asked about the tension.

Ashley: "Do you take any special pleasure in beating Topalov?"
Kramnik: "It’s just an opponent. It’s never personal for me, a chess game" ????

There were a number of missteps in the round as Michael Adams dropped a piece against Levon Aronian in a tense position. This Guioco Piano went into known theory but when Adams equalized he went in for 18…Bxd3?! 19.Qxd3 e4 when white goes 20.Qd4! Black was still OK, but after Aronian got play with two bishops, he goaded black into an uncomfortable choice. On 33.Qxe5+ black had to play 33…Ka7 when 34.Qxc5 Rxd1+ 35.Bxd1 Rd8 is equal. Adams erred with 33…Ka8?? which tosses a piece after 34.Rxd8+ Rxd8 35.Qf6!

Caruana-Anand had some critical moments out of an English. The turning moment came on 28…Qb1 and Caruana’s aesthetically provocative 29.d4! The U.S. Champion thought this provided white with chances and Anand stated he lost the thread a bit after 29…exd4 30.Bxd4 31…Rc8. After Caruana’s 32.Ba1, the game started to veer toward dynamic equality. Caruana thought 32.e5 was a better chance, but there was not much left after the queens came off. This was the round of two bishops vs. two knights.

Lastly, there was MVL-Giri Najdorf Sicilian which was done in 24 moves after a three-fold repetition. The side story here was the 6.h3 line which has picked up steam given the resources black has against the 6.Bg5 (Poisoned-Pawn), the staid 6.Be2 and the over-analyzed 6.Bc4. The latter was a favorite of Bobby Fischer and inspired others to play it during the “Fischer Boom.”

One such player was IM Emory Tate who scored many spectacular victories with the weapon. His son Emory “King Cobra” Tate III was at the venue hanging out. The four-time kickboxing World Champion has been on British reality shows lately. A book on his father will be released within the next few weeks.

Amazing to sit and kick it with Emory Andrew Tate, the son of the legendary Emory Tate. Hi… https://t.co/SKCuiBaGOS pic.twitter.com/wSbZhow7fH

Key matchup in Round #2 will be a battle to two first-round winners Kramnik-Aronian. Caruana will be looking to get in the win column against a beleaguered Topalov who was over 2800 in last year’s event (now 2760). The Bulgarian stated in the Sinquefield Cup that he no longer competes with as much determination as in the past. His cavalier approach to elite events has resulted in the shedding of Elo points, but may be taking a spot from a player who is a bit hungrier and in need of elite-level experience. Let’s hope he doesn’t repeat his performance in last year’s event with -4.