Game 9: Carlsen at the brink… holds for another day

“The King’s Choice: A Chess Drama”

In Norway, five million people have been staying up late at night following the championship match featuring their native son Magnus Carlsen and Russian challenger Sergey Karjakin. A couple of days ago Norweigans reacted with shock after Karjakin broke into the lead and Carlsen avoided media storming out of the press conference. It was a dark day in Norway.

However, there would be four games left for Carlsen to right the ship. First matters first. Carlsen was excoriated by chess journalist for his actions. Even in Norway there was a shock concerning his behavior and reaction was swift. Tarjei Svensen told Norwegian Broadcasting (NRK) that he understood the frustration, “but to leave the press conference, that’s not good.” He called Carlsen’s behaviour “unacceptable.” 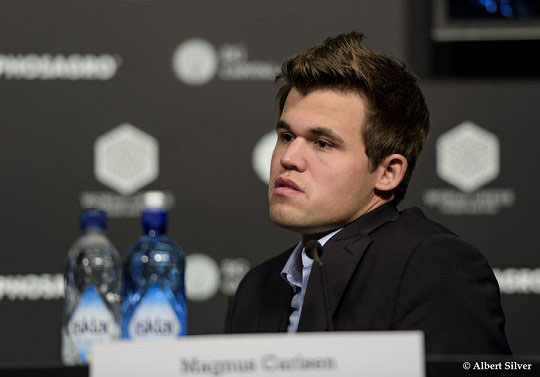 A dejected Carlsen ponders moments before storming out of the press conference. Photo by Albert Silver.

“Magnus knows that he is obligated to take part in the press conferences, so in this case, it was his temper that took the upper hand,” Agdestein told NRK around an hour after Carlsen’s dramatic exit and when he and Carlsen had arrived back at their hotel. “Magnus is just so determined to win, and like most, he despairs when he feels he has underperformed,” Agdestein added. “It is so limitlessly irritating that everything else becomes secondary.” He noted that Carlsen was preoccupied with the fame itself on the ride back to the hotel, not his poor performance at the press conference as well.

Not a good omen and many proverbs and fables point to lessons when one chooses fame over humility. There was a big question on what would happen if Carlsen was rankled and we have seen the result. What happened was unfortunate and hopefully Carlsen has apologized, but his faces a 10% fine of his winnings in violation of the contractual agreement to attend each press conference.

After the rest day, Carlsen and Karjakin had a fresh start. They would enter game nine in a pivotal battle, but the question would be the approach each would take. Would Karjakin shepherd his one-point lead or will he try to increase the distance, almost certainly clinching the match? Would Carlsen try to strike back or would he load up for the white game on America’s Thanksgiving holiday? We would soon find out.

In the ninth game, another Ruy Lopez with black opting for the Arkhangelsk or “Arch Angel” variation with 6…Bc5 We were in for a fight. In this game black sacrificed a pawn for a better structure and active pieces. However, a pawn is a pawn and white has the bishop pair. The game was heating up with 18…c5!? and Fabiano Caruana described it this way…

Years ago, as Rustam Kasimdzhanov was frying some plantains, he explained to me that this move was the best chance for Black to equalize. After we analyzed it, he tried it against Nakamura in the 2014 Tromso olympiad. Carlsen and his team also must have felt this was the best way for Black to approach the position.

Wow… fried plantains… secret ingredient to inspiring strong play. Indeed, black had adequate play, but the game turned and it was Karjakin who looked to be controlling affairs with his bishop pair. There were tactical landmine featuring several sacrifices on the f7-square. There was even a nice variation involving a queen sacrifice. On 31…Nb4, there would have followed the snappy 32.Qxg6+ hxg6 33.Bf6 mating. Karjakin demonstrated this line to the delight of the audience.

However, on Karjakin missed another chance after 33.Qc2 when 33.Ba4 Qf5! is parried by 34.Qf1! which met the approval of both players. Karjakin smiled, “Brilliant move!” Nevertheless, 34…Rb1! was in the air. The game reached a fever pitch as Karjakin uncorked 39.Bxf7+ evoking roars from the crowd.

I'm a very rusty GM, but I feel in my bones that 39.Bxf7+! is the right move here, and that it's strong.#CarlsenKarjakin