Interesting matchups in today’s Olympiad billing as USA faced Norway and Magnus Carlsen who have slowly climbed into medal contention. The Americans were a heavy favorite to win the match, but all eyes were on the board one matchup of Caruana-Carlsen. That game took an interesting course after Carlsen trotted out 1…d5 for a Scandinavian. He has beaten Caruana with the opening before in the last Olympiad and was anxious to see if there would be any improvements.

Caruana had also faced the Scandinavian of Loek van Wely in 2012 Tata Steel and was unable to get anything. Carlsen essayed the 3…Qd6 line and the queens came off early. Caruana admitted to missing 17…c5! which won a pawn after 18.dxc5 Bxc3! However there were nothing in the position and they repeated moves.

The other boards were a wash as the Norwegians were simply outclassed on the other boards. Hikaru Nakamura took down Jon Ludwig Hammer in a King’s Indian after an initial white aggressive was rudely pushed back into passivity. Sam Shankland played another novel game and spoke to Anastasia Kharlovich about his Najdorf game with Frode Urkedal. Daniel King also analyzed it at length with Shankland in his highlights. You can see it at the end of this report.

In the other games, India has a setback losing to the Ukraine with Anton Korobov beating SP Sethuraman in the 11th hour when the black bishop reigned supreme over the white knight. The win moved the Ukraine into a tie with the USA, but the Americans have tremendous tiebreak advantage. Russia walloped Azerbaijan 1 3-1 putting serious jeopardy the hosts medal aspirations. Vladimir Kramnik absolutely crushed Teimour Radjabov in a kingside onslaught. It was in the Giuoco Piano which has come back into fashion lately as an anti-Berlin method.

Grischuk also won against a struggling Arkadij Naiditsch who has lost three consecutive games in the tournament. He will most likely sit the last two games. So the order is USA, Ukraine and Russia with USA-Georgia and India-Russia being key matches. Azerbaijan 1 hopes to keep medal chances alive with a win over England.

China back on top… time running out for Russia

Crucial game for the USA women’s team as they faced China in a pivotal matchup. Coming off a historic win against Russia, the Americans were hoping to hold the Chinese. Being heavily outrated on the top two boards, it would be a tall order. Krush was able to equalize Hou Yifan in a rather placid game… no fireworks to speak of. 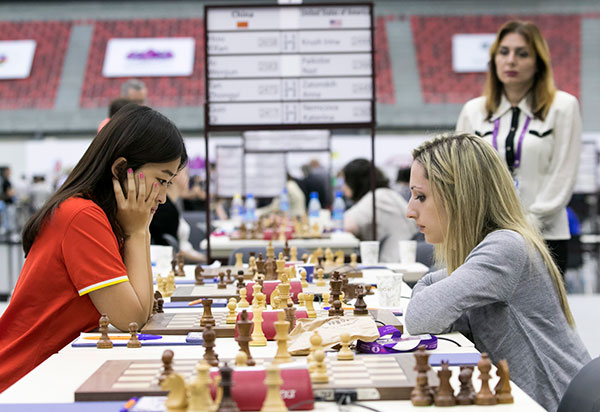 However, in Ju Wenjun’s game against the USA national champion, white was able to squeeze a win out of the position for the margin of victory. It was a disappointing loss for Paikidze. Poland beat Israel who has surprisingly crept onto the top boards. Russia dispatched a spirited Vietnam team who created a sensation earlier in the tournament by drawing China (Nguyen over Zhao Xue) and beating Romania.

Russia moves into 4th place and while a gold medal seems unlikely, they are still competing for a medal. Meanwhile India is also in the hunt after their 3-1 count over the Netherlands. They will play the Ukraine next for a key matchup.