Last year, FM Josh Colas declared to the chess community and his supporters that he was on a mission to earn the GM title. He got closer to that goal by notching his first GM norm at the North American Class in Las Vegas. He nearly missed an IM norm at the Philadelphia Open in April, but did not play the required three foreign players. So his norm hunt is in full effect.

Coming into the summer, he was glad to hear that FM Justus Williams would be attending Webster University along with another New Yorker and Candidate Master Shawn Swindell. So the last year has been one of promise for Josh. Of course, the route has not be completely smooth as he had a subpar showing at the Chicago Open in May. Returning to the World Open is generally a good remedy for budding stars. It’s the largest stage on the American circuit and the young players come looking for scalps. In the first round, got wins against two 2100s and held Israeli GM Gil Popilski. Then he faced phenom GM Samuel Sevian in this slugfest.

Needless to say, Josh will have to return to check his preparation in the Sicilian Kan. It would be a lesson learned and the only loss he would suffer. In the penultimate round, he was on 4.5/7 and still on track for the IM norm. He was facing a tough Cuban player GM Fidel Corrales Jimenez and what ensued was a very intense encounter that appeared to show Josh fighting to maintain a slight initiative but had to yield the draw. In his final game, he needed to win to secure the IM norm.

His opponent was the Hungarian GM Gergely Antal, a player who decided to stay away from preparation and trotted out 1.e4 c5 2.Nf3 e6 3.b3!? d6 4.Bb2 Nf6 5.e5 dxe5 6.Nxe5 Be7 7.Bd3!? Perhaps it was his own preparation! He proceed to take a seemingly coffee house approach with 12.Rf3 g6 13.Qe1 Ne8 14.f5. White had an initiative and netted a pawn, but allowed Josh to gain a towering passed pawn that reached the e3 square while the two white pieces looked on from the queenside. Despite the pawn advantage Antal had to donate a piece to stop the pawn and black obtained a winning ending. Great finish by Josh as he earned his first IM norm to go along with his GM norm. 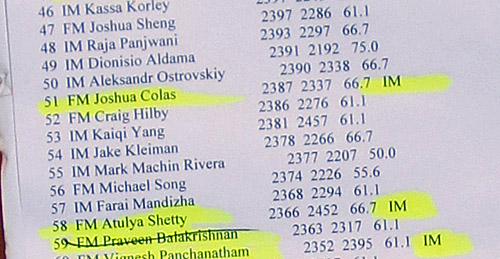 There seemed to be some confusion circulating in social media as to how the GM norm could be used toward his IM title. Josh Colas’ earning of the GM norm gives him the ability to use the norm toward two titles, IM and GM. It was being discussed on Facebook’s “Chess Connections” that Josh could use the GM norm, both as a GM norm and IM norm simultaneously to combine with the IM norm he just earned. This is incorrect. The GM norm does not come with an additional IM norm, but you can use it for earning the lower title. There was also the discussion on whether Josh had to lose the GM norm if he used it to earn the IM title. The good news is a player is not required to forfeit use of the GM norm if they use it for the IM title.

“If a norm is sufficient for more than one title, then it may be used as part of the application for both. (link)”

Thus, Josh will be able to use his GM norm toward both titles. At this point, he has one GM norm and one IM norm. If he earns another IM norm or GM norm, he will earn the IM title, after meeting the 2400 FIDE rating requirement (which he should have now). If he earns another GM norm, he will have the IM title and two GM norms. Nevertheless, Josh mentioned in an interview to The Chess Drum that he was happy with his performance and was confident that he would be able to achieve the IM title preferably before enrolling at Webster. Nevertheless, the future is looking bright. Congratulations Josh!