The case of Leon Wilson ended in a hung jury on February 29th. In Delaware County were the trial took place, there was neither relief or joy after the jury remained deadlocked. Wilson is facing 20 years on three counts of gross sexual imposition involving two of his students, ages four and seven. The trial lasted four days and heard testimony from all parties including Mr. Wilson himself. 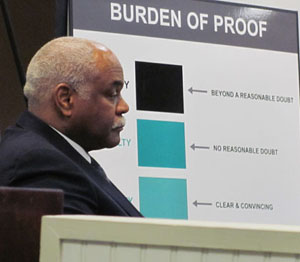 After the jury was hung, Wilson exited the court room and was asked if he felt it was a “fair deal’. He replied that he does not know fair is at this point. What Wilson is alluding to is the fact that he will go on trial once again to defend himself against these allegations. There will be a new judge and a new jury and the trial will be reset for June 6th. Each party will go through the process of proving their respective cases once again.

Wilson had a dozen supporters (including parents) at the trial and they weighed in: Ann Mandic, whose daughter is a former student, was chagrined. “I just am really disappointed that he wasn’t acquitted today, especially after taking an passing a polygraph test,” she said. Unfortunately, Delaware County does not accept a polygraph test as admissible evidence.

“Didn’t happen. I’ve done what I could do. I’ve done everything from the science on. So no, this is not a vindication at all.”

What could possibly be different from the first trial? Each side will have a chance to fix weaknesses and fortunately for Wilson, an instance of a hung jury casts reasonable doubt. However, a hung jury does not mean “not guilty” rather they failed to arrive at a verdict. In an interview with NBC affiliate, Wilson had mixed feelings. “Didn’t happen. I’ve done what I could do. I’ve done everything from the science on. So no, this is not a vindication at all,” he said.

It is unknown, at this point what the vote count was in the jury. However, the retrial in June will bring a clean slate. In the meantime, Wilson is still required to wear a monitoring bracelet. He maintains his innocence.