World Champion Magnus Carlsen won the final leg of the Grand Chess Tour by winning the London Chess Classic on tiebreaks. It was a rather austere series for Carlsen garnering an efficient +1 over the three events. He was helped by his high-scoring performances in Sinquefield and London.

Indeed there were some disgruntled fans and players commenting on the tiebreak system. It appeared that there was a point about Maxime Vachier-Lagrave winning his match against Anish Giri, but only getting third place behind Giri. In addition, it seemed quite ironic that Carlsen won the Grand Chess Tour (27 games) with +1 and Giri came in second with +5. 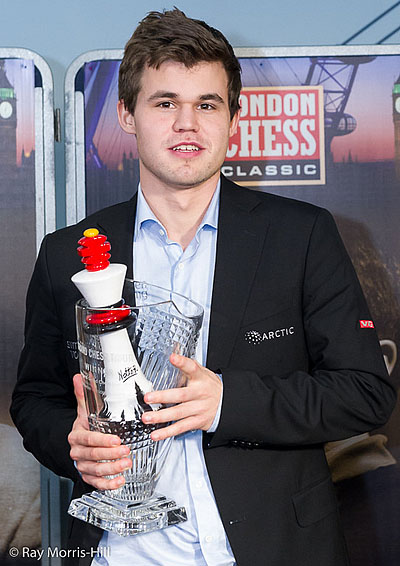 There is no reason to call Carlsen “lucky” although his opponents did miss opportunities. Perhaps Alexander Grischuk thought he would somehow get mated and didn’t play 30…Rxg4! in the last round in London. Perhaps Giri saw Thor’s shadow when he had his chance to play 21.f4! There is no understating the tension at this level. Carlsen stated that he was nervous in the game versus Grischuk, but it was the Russian who habitually entered zeitnot.

There is no understanding why opponents let Carlsen wiggle away so frequently, but that is the intrigue of chess… a war of nerves. Carlsen will be watching carefully when the Candidates tournament takes place in March. Many of these players will be participating. For future Grand Chess Tour events, there should be adjustments… certainly in the tiebreak system and perhaps in variety of players and more tournaments. There are the same players for several tournaments… not to mention Tata Steel and opens like Qatar Masters and Millionaire Chess. We shall see.