With some luck on his side, Ian Murara, 13, defied the odds to make the top six winners of the national Championship Qualifiers, a seven round tournament that concluded at Hilltop Hotel on Sunday.

The grade nine pupil at Green Hills Academy emerged sixth after garnering 4.5 points. Murara won four matches – including a gratis win awarded after an opponent failed to show up in the fifth round – and drew one. A win means one point while a draw is half a point. 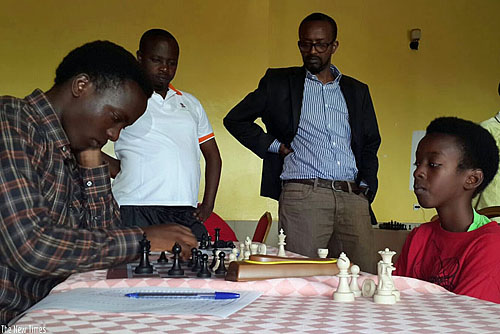 Rwanda Chess Federation Executive Secretary Alain Patience Niyibizi, who was chief arbiter, said, “We are very impressed by Ian’s steady progress. It is so encouraging to see a young boy knocking out older players. We only wish that parents, and schools, could allow more children to play chess.”

A total 24 players participated in the tournament that had eight players under 18 years, with Murara being the youngest.

The six qualified for the National Championship, a tougher nine-round test with rated players scheduled for December 10-13, where the winner will be crowned 2015 National Champion and also qualify immediately for the Olympiad qualifiers in May next year.

The Olympiad will be held in Baku, Azerbaijan in September, 2016.

November is a busy month, with three tournaments including the nine-round Rapid and 11-round Blitz national events set for November 21-22; and the Youth Championship starting November 27.

Girls and boys under 18 years of age also will participate in the second ever youth tournament. The first was held in 2013.