Today’s games at the Sinquefield Cup were not as bloody as in the two previous rounds, but there were some tense moments. Topalov could not live up to his new nickname of “unstopalov”, but still holds a narrow lead. Meanwhile Magnus Carlsen notched his second win over Maxime Vachier-Lagrave who confessed that he was in a “not so unpleasant situation with Magnus.”

Sure enough, Carlsen fought to a slow and grinding positional slog. MVL was saddled with an “isolani” and that was the defining characteristic of the position. Eventual that pawn fell and Carlsen kept creating new problems. However, there was a moment in the game where Maurice Ashley felt the World Champion slipped after 39.g4 Nh4.

Carlsen said in the press conference that he had to get the h-pawn to eliminate the threat around his king. Of course there would be no 40.a7?? Nf3+ 41.Kh1 Rxf1 mate. Instead Carlsen corralled the h3-pawn and a couple of moves later MVL resigned with a healthy white pawn sprinting for a6-a7-a8(Q). With the win, Carlsen is putting together another tournament of streaks.

The only other decisive game was Wesley So’s win over Alexander Grischuk. It was their first encounter. The Russian fell into time pressure once again, but it didn’t seem like he was that much worse in the game except for a space disadvantage. 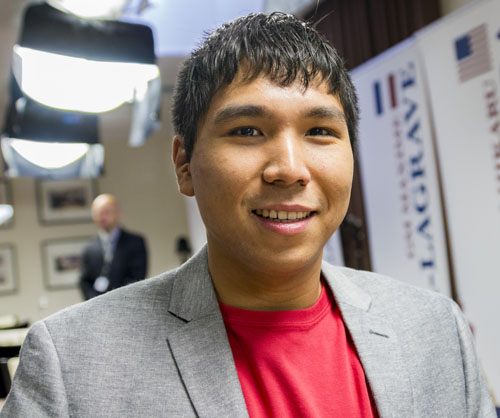 Wesley So got his first win in the tournament!
Photos by Lennart Ootes (for CCSCSL).

After 28.f4, white started to increase the advantage. Even after black undermined the center with 29…f5, it did not release the grip. In fact, it may have made things worse. All of black’s pawns ended up weakened and the position was completely losing. Grischuk resigned rather than suffer a long ending defending a shattered position. Some felt he should have played on longer.

In the three draws, there were tough battles including an All-American battle between #1 and #2 players, Hikaru Nakamura and Fabiano Caruana. This game was a Grunfeld that featured a daring Benko-like pawn sacrifice with 8…b5!? Black certainly got adequate compensation for the pawn after 9.Nxb5 Bxb5 10.Qxb5+ Nbd7 11.g3 Rb8 12.Qa4 Bg7. You put the black a7-pawn on d6 and you have a regular Benko Gambit.

As the game wore on, it became apparent that black had full compensation after sacrificing yet another pawn. Caruana played the cunning 16…Qc8 threatening to trap the queen. He continued to harass the queen and actually got an imposing passed c-pawn after 29…c4. In fact, the commentators were buzzing about the strength of the c-pawn.

Caruana did miss the suggestion of the engine after 30.Ng5 of 30…c3! Even then black never seem to have more than a slight pull. In fact, black’s initiative dissipated quickly and a rather drawish ending ensued. One fan on chess24.com stated that Caruana’s opening prep was superb, but his transition from opening to middlegame to endings are problems needing improvement. Hard to critique a player who has the third highest all-time rating.

In Aronian-Giri, the Armenian came into the “confession booth” to talk about his choice of 16.exf3!? The engines did not approve, but he looked at the camera with glee and said, “It should be fun!” Indeed it was, but he was unable to get anything concrete. The game was most likely level at move 30, but they played a dozen more moves before shaking hands.