In conjunction with Cover Girl, there was a beautiful interview done by Soledad O’Brien on Rochelle Ballantyne, a student at Stanford University. She is better known as chess player on the “Brooklyn Castle” fame and a successful student at Brooklyn Tech.

Now as a Stanford student she has evolved into a young woman with bigger goals and aspirations. Besides her interest in civil rights law, she has one goal that has been constant… earning the title of U.S. chess master and thus becoming the first African-American female to do so. She is currently rated 2038, but has been as high as 2127. Rochelle is still active and recently played in the U.S. Open in Phoenix, Arizona. She last graced this website before heading to the World Youth Championships in the United Arab Emirates.

The 8:49 minute interview took the viewer into the life of Rochelle as she explained her humble beginnings and her first chess lesson from her beloved grandmother, who is now deceased. She was in one of the most active cities in the country and cut her teeth on tournaments at the Marshall Chess Club and at the stiff competitions throughout her scholastic years. A video team shadowed her at the historic Millionaire Chess Open and followed her progress. 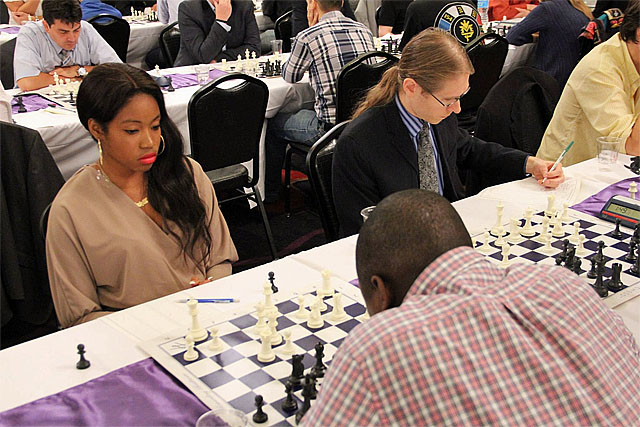 However, it has not been easy to ascend to the level of master. With the demands of her studies and scarce resources to invest in chess advancement, it has been a difficult task. This video is a poignant look at the challenges of three demographic variables… gender, race and class. It may become quite a story if Rochelle achieves her ultimate dream, but certainly she will have her share of accomplishments to come. Enjoy!